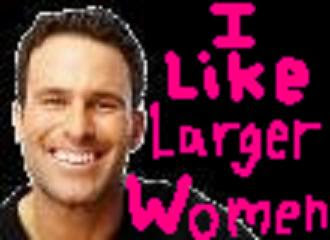 C'mon, Facebook. If one of your members clicks on the word "OFFENSIVE" in response to an ad, is it really that tough to make sure that piece of shite doesn't show up again? Hell, do you even vet these ads before they show up? I mean, really.
Posted by Merujo at 10:59 PM

I have heard that the "OFFENSIVE" thing is supposed to ensure the ad doesn't show up again, but I think it's not true....I keep seeing the same personals ads over and over and over again (usually featuring women with gigantic breasts.)

Oy. Huge hooters. Just as scuzzy as the ad I'm bitching about. "Here, guys! You don't want anything but boobies. Enjoy." Feh!

An acquaintance of mine clearly hasn't set his Facebook privacy settings to keep his photos from being snapped up and used in ads. I think he'd be very upset to know he (and a co-worker of his I've met) show up in a "larger, older singles" ad that pops up every other day or so. I've been trying to decide whether or not it's better - or more embarrassing - to tell him or not.

Ridiculous and insulting! How do you protect your photos from being used in ads?

In return, I can give you a little hint...I took my relationship status off my FB page, and I don't get the dating ads.

Long time no chat, Merujo. Glad I was able to catch up on your writing today. Found this for blocking ads if you use Firefox...totally worth switching to Firefox if you don't already use it! xoxoxo, S

For my friends who use Firefox, I couldn't figure out how to make Ad Block work on the FB ads. The Ausbury Blog found the answer--and so far, it's working for me:
------------------
My son and I did some research and here’s how to block all the bothersome ads on Facebook. This is quite easy to do if you’re using Firefox - just use the Firefox add-on called Adblock Plus and add a few custom filters.

How to block Facebook ads within the Firefox browser:

1. Go to this page: https://addons.mozilla.org/en-US/firefox/addon/1865
2. Click: Add To Firefox
3. Wait for Install button to become active then click it.
4. Restart Firefox.
5. When Firefox opens, you should see a tab: Add Adblock Plus Filter subscription
6. If you want to block ads on many other sites, click the button next to EasyList (USA), then click Subscribe.
7. Under the Tools menu in Firefox, select Adblock Plus Preferences.
8. Click the Add Filter button.
9. Copy and paste the following filter: facebook.com#*(social_ad) and click OK.
10. Repeat steps 7 and 8, then copy and paste the following filter: facebook.com#*(social_ad_advert) and click OK.
11. Close Firefox, then open it and go to Facebook. Adblock Plus should block all Facebook ads.

If you haven’t yet ditched Internet Explorer, here is the download link for Firefox:
http://www.mozilla.com/en-US/firefox/

We’re still searching for an easy way to block Facebook ads in Internet Explorer. I’ll keep you posted as we keep looking.