I can't type much right now, so this will be very short. I was in a car accident a week ago Tuesday. Don't really want to talk about it. Makes me very upset, for a variety of reasons. Not sure that I'll write any more than this about the event.

My right wrist is broken, but I had five grant proposal deadlines (all were due today) and I haven't really been able to rest the hand at all. Can't lie. I'm very depressed right now. I'll be back here when I'm feeling less crappy and have a little more hope in my heart.

Thanks to all my lovely friends who have written or called. I am grateful. Please consider this a universal hug to you all. Please know that I'll contact you when I'm feeling a little better.

Once more, with (incredibly painful) feeling!

My bad eye decided to act up over the weekend. I've had to use drops that muck up my vision, and I've been sitting in my office this week with shades and headphones, looking like Stevie Wonder's less-talented, white cousin.

Problem with the eye is that my depth perception is even more nonexistent right now, and yesterday morning, navigating that dangerous three-inch drop from the sidewalk to the street by my car, I took a major header, full speed, into the cement. Landed on my knees, full force. Caught myself with my hands before my head could hit the pavement. I would like to blame this incident on the ferocious nature of the "Attack Pavement" in my 'hood, but, alas, it can only be blamed on me, my mucked up eye, and my general clumsiness.

I'm really glad none of the neighbors saw me face down in the road. That's just not the image you want burned into everyone's mind.

To paraphrase the narrator from "A Christmas Story", I lay there like a slug. A slug in smart work attire, clutching a bottle of raspberry seltzer water. (That bottle would be put to good use as a temporary ice pack.) A slug wishing that she hadn't just fallen off a THREE-INCH curb.

My entire body started to throb. My damn tailbone hurt! How the heck does your tailbone hurt when you've faceplanted yourself? Referred pain is, especially in this case, a serious pain in the butt!

Now, at this point, a sane person would have just crawled back to the apartment rather than go in to the office.

But when's the last time someone described me as sane?

When I got downtown, it took me five minutes to get out of my car at the parking garage. I think the valets wanted to kill me as I held up their rush hour parking work, but I just couldn't move. (Sorry, guys!) After gimping to the office, one of my colleagues noticed I was incredibly pale. When I rather ungracefully pulled up a trouser leg and showed her my ginormous, shiny knee, she almost heaved in the hallway. I hope she'd had breakfast already!

I had to get myself psyched to make the hobble down to our Med Unit in the basement of the building. Our office was in the midst of the annual Explorers Symposium, so there really wasn't anyone I could bug to go downstairs on my behalf. I was very appreciative that the Med Unit nurse had a bunch of crushable single-use ice packs for me to apply throughout the day.

I was bummed to miss the Symposium - there were a lot of cool presentations. At least I got a good amount of work done in my cone of silence, with the door closed and ice packs shifting all over the place. But, by about 4 p.m., my entire left leg had turned into an unhappy, throbbing, mottled tree trunk, and I had to take off my watch to accommodate my left hand, which was rapidly turning into a Macy's parade balloon. Yes, it was very pretty.

By the time I got home, I was a ball of misery. Took me twenty minutes to get brave enough to step out of the car onto my left foot. My knee was going in and out, and I had this horror of falling down again in the exact same spot.

Long story short (I know, too late for that) after a trip to the doc and the ER this morning: I sprained both ankles, my left knee, my left wrist and my left shoulder, and tore a ligament in the left knee.

I spent the day today at home. Not working from home. Just at home. Sleeping, icing various body parts, grumbling. I'm up now, since I need more water and the computer chair is currently conveniently located between the sofa and the kitchen.

Warning to coworkers: my sense of humor may be greatly impaired tomorrow. I will try to keep my tooth-grinding crankiness to myself.

Do they make full-body ice packs? Not sure one large enough for my person would even fit in my freezer!

Huzzah for the Sasquatch!

This has been quite the eventful couple of weeks for my dear friend, the Sasquatch. After three years of balancing a full-time job and a graduate education, the shy arboreal creature received his MFA in Graphic Design from the Savannah College of Art & Design. I'm very proud of him. I think it's a remarkable achievement to graduate with academic honors while pulling down a 40+ hour week in a hectic, demanding workplace.

While I could not be down in Georgia to see him be honored in person, I was able to watch the events unfold on the SCAD website. That was very cool. I was even able to snap a screen capture of the moment of the diploma handshake. However, since the Sasquatch is a modest sort, I will not share the image here. Instead, enjoy this artist's rendering of his graduation: 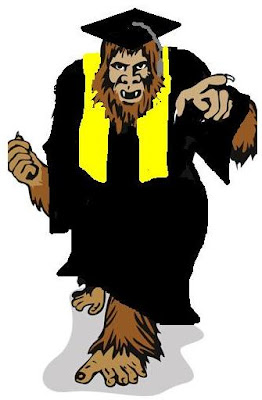 With a sense of purpose and determination, the Sasquatch lumbers across the stage at the civic center in Savannah, gnarled (but talented) hand outstretched to accept his well-deserved SCAD MFA diploma...
Fine work, Sasquatch, my friend. Fine work, indeed. You rawk!

This weekend brought his birthday, and, as part of the celebration, we headed to Wolftrap last night to catch DeVotchKa and David Byrne. Truth be told, we were really there to hear DeVotchKa play. David Byrne, despite being the headliner, was an afterthought.

We discovered DeVotchKa one night on the car radio, and we were so captivated, we just sat in my jalopy for half an hour, listening and listening. The music is a blend of gypsy and Mexican, Eastern European and Latin, sung in whatever language is most appropriate. The musicians are all multiple threats, each playing at least two instruments, from mandolins and guitars to trumpets and sousaphone to standing bass and theremin. Yep, theremin. I highly recomment their CD "How It Ends" as a way to begin.

We brought a blanket and a tarp for the saturated hillside of the Wolftrap lawn, and cold fried chicken and Amish salads for our bellies. The Sasquatch raced ahead of me to stake out a spot on the grass. He did exceptionally well. On a night where the lawn would become clogged with happy punters, we had a fabulous view of the stage. We also had, by chance, plopped down one blanket away from the ever-kind and cool Frank Warren of PostSecret fame. It was a real pleasure to see Frank, as always. He's a real sweetheart, utterly mellow, and we were pleased to give him scoop on DeVotchKa, whose music he didn't know. 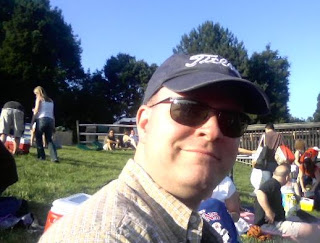 A rare, non-blurry photograph of the Sasquatch.
He can be slowed down and recorded only when tempted
with chilled, dark-meat KFC and the promise of remarkable music.
We ate, we rocked out to the band we were excited to see (DeVotchKa got a standing O from the audience - how often do you see that for an opening act?!?), and we really enjoyed David Byrne, too. The Sasquatch would do more justice to describing the wonderfully simple, but effective design of the show (performers all in white, with revolving panels of color behind), so I'll just say it was quite good. Heck, it even had choreography!

All in all, it was a good night. There were points when I just lay down on the grass (well, on my wonderfully cheesy Moline Maroons blanket) and looked up at the heavens, watching the stars slowly come into view over the Filene Center. For a little while, the world was as small as that hillside. No back pain, no worries. Just good music and a good friend.

I wish, as grown-ups, we could have more evenings like that. Music. Friends. Cold fried chicken. It's a little piece of bliss.

Thank you, Sasquatch, for letting me be part of your birthday. And congratulations to you for your admirable academic achievement. The world is your oyster, my friend. Time for you to belly up to the graphic design raw bar!