Hooray! My WASP article has a publish date!

Just heard from my editor at Smithsonian Air & Space magazine. My feature about Mom, her time in the WASP, and the experience of growing up with a extraordinary woman for a parent is now set for the August 2010 issue of the magazine!

When we get closer to the publish date, I'll post a reminder (and, dear friends, you'll be hearing directly from me, too) so you can pick up your copy at your local news stand. :) It'll be my goal to see this issue sell out!!

And there will be web extras, too - those of you who have never heard my mom's voice will get a chance to hear her tell stories in her own voice.

Can it get any cooler?

Been a good day. A good creative day. Got loads of stuff done for the 9-5, worked to help a new friend make some (hopefully very fruitful) contacts, and got this good news on the article!

I'm going to ride this good feeling as long as I can.

Got an hour before the DVR kicks in for both Law & Order and Castle. Time to do the dishes, so I wake up to a shiny, clean sink. Trust me, there's some Zen in that.

Back in black! (and white)

Playing catch-up with myself this weekend. Aggressive napping, coffee, fly-lady-style cleaning, laundry, laundry, laundry, more rest, and a little junk food entertainment in the form of "2012" courtesy of RedBox and the planet-hating mind of Roland Emmerich.

I ended up with tendonitis in my shoulder, elbow, and knee as a side effect of an antibiotic for my recent, deeply evil sinus infection, so I'm doing everything quite slowly right now. And yes, sadly, that includes writing. So, give me a few days, and I'll be back in the saddle again. Had family staying with me for two weeks surrounding the WASP Congressional Gold Medal events, and I'm still not fully back on my normal body clock. (Didn't help that we did the "spring forward" thang in the midst of the mix.)

Many stories to tell - about the ceremony, about going to Udvar-Hazy for the first time, about getting teary-eyed repeatedly, about having an extra-long slumber party with the siblings - but I'm cutting my gimpy right arm some slack this weekend. For now, here's a not-entirely-flattering picture of me at the Capitol, having just retrieved Mom's copy of the Congressional Gold Medal. This is about as "Capitol Hill" as you will *ever* see me. Dry-cleaned jacket, pearls, and all: 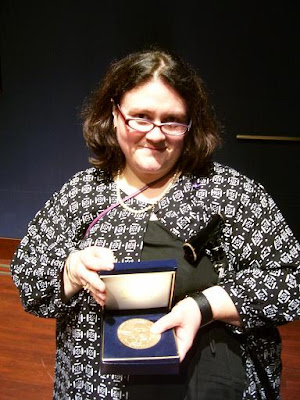 Of course, I'm also wearing a Snoopy watch with the words "ARF! ARF!" on the face. Hey - it's a step up from my Starkist 30th anniversary Charlie the Tuna watch with the velcro band. This one has an actual 100% faux leather band. From China, even!

More soon. I owe so many of you notes and hugs through the ether!!

Time for stories and photos later. Now, time to rest mind and body.
Posted by Merujo at 7:10 PM 2 comments:

Other than that, Mrs. Lincoln...

So, how was your day, kids?

Here's how mine started:

I forget I have cinnamon scattered all over my bathroom floor to kill the leetle, tiny, obnoxious ants that have taken up residence by my shower like it's an Insectoid Motel 6. With my eyeglasses off, all I see is a sea of what looks like dried blood and I have this brief, heart-stopping Psycho moment. Then I get a whiff of the redness, and I'm cool.

Until I discover the ants have moved from outside the shower into the shower. I should have worn my glasses. Nothing like feeling ants under your feet in the freakin' shower. Uuuuuuuuunnnnnghhhhhhuhhhhhhh.

Then, I hear what sounds like someone being loud on the street. No big deal. Until I haul my nekkidness out of the shower only to discover some frakking HVAC technician has entered my apartment and is doing repairs a few feet away from my birthday-suited self.

First time in a long time I have screamed bloody murder. And, quite possibly, the first time ever I've had to yell, "OMIGOD, GET OUT OF MY APARTMENT! I'M NAKED HERE!!"

I was the angriest woman in the world as I got dressed. Called the condo office and spit bullets through the phone. "Could you tell your guys that, if they hear a shower running when they come in to do work, that maybe - just maybe - they should LEAVE?!?"

Does it get any better? Oh, hell yeah. Of course it does. I found out my PIP insurance coverage for the last car accident is exhausted. No more physical therapy. Just in time for me to have tendonitis in my elbow and shoulder, probably thanks to the weird-ass side effects of the antibiotic I just got done taking. Nothing says "hello world" like the weak wave of someone with rotator cuff pain.

Then, I drive downtown only to discover that my parking garage is closed for, as the sign says, "Emergency Renovations." What the hell is that? QUICK! Call an interior designer! STAT!

But, I'll echo what my boss pointed out to me this afternoon: for once, my car and I managed to dodge a bullet. I wasn't there when the Garage Hellmouth appeared.

I guess I should just count the day as some sort of success, right?

By the way, should I count being nekkid with the repair guy outside the bathroom door as a date? It's probably as close as I'll get this year.

There you go, 2010. A raving success. Disaster avoided. Nakedness in same space with breathing male achieved.

I know, I'm sucking with the writing right now. Been sick. (As if that's a surprise to any of you.)

Ended up with what the ear/nose/throat guy called "the worst sinus infection (he'd seen) in years." Then ended up on an antibiotic that killed my appetite, my balance, my sense of taste/smell, blurred out my vision and gave me joint pain.

On a positive note, my sinus infection is gone now.

Meanwhile, here's a little piece about Mom from this morning's Quad City Times, from back in my hometown. Neat that they include a link to a 1999 story they ran about her, too.

I'll get back up on the blogging horse in earnest in a couple of weeks. Just have to ride/reap/and subdue the whirlwind right now.

Later, gators!
Posted by Merujo at 8:00 AM No comments: