Things aren't good right now. I won't say much more about it. Things simply aren't going well. And thus, I'm trying to find The Funny wherever I can.

My friend Ben made a comment on this photo over on Facebook yesterday. I hadn't thought about it in a while, but it made me laugh today. And, dear lord, I needed a laugh today. Hell, in this economy, I bet you can, too.

So, for the amusement and horror of those who need a little lift, I'm resurrecting an oldie, but gawdawfulie: the Merujo Carpet.

If you missed it when I first posted it back in 2005, this fugly carpet was custom-woven for me as a surprise gift from an Uzbek government official several years ago. He had snapped an atrocious photo of me the previous summer when he was visiting the 'States. I recall the day of that photo being somewhere near 100F, and I tend to melt in our humid DC swamp-swelter. This Uzbek gent handed off this wretched, hot, sweaty summer day photo of me to some carpet weavers (who are probably still in therapy.) Months later, lo and behold, a nightmare was born! I look like the Pillsbury Doughboy's ruddy maiden aunt, with frizzy hair pulled up so tight, I appear to have a high-and-tight Marine haircut.

So, for those who missed it before - and for those who can never turn away from a car wreck, here it is. The single ugliest thing I will ever own. Remarkably, it makes the actual me look good in comparison: 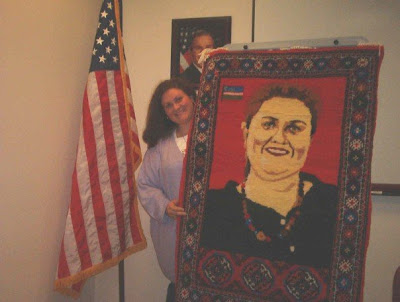 Just remember, when you are having a bad day, hopefully no one has immortalized you in loosely woven wool.

Loosely woven wool designed to be walked upon.

And frighten children.
Posted by Merujo at 8:53 PM

LOL...that's so bad, it's rather awesome.

I've been away from my reader account. Sorry to hear you're not doing well. I hope it's getting better as I write.

OMG. Well, my comment could go a few directions. I could be very southern and say something like, "Well isn't that lovely, dear?" Or, I could do what my mother is increasingly doing as she ages. Drop my mouth open and stare in abject, um, wonder. More than likely, though, the next time I see you, I'll probably look at you, throw up my hands, say "WTF?!" and buy you a coffee.

Somewhere in that gift is a MasterCard commercial just dying to get out...

And even though you invited us to enjoy a good laugh, is it bad that I did???

Aren't they actually the standard form of ID in Uzbekistan?

That's cool! It's not accurate but how cool is it to be 'woven' into history like that.

I still think it's pretty amazing that he went to the trouble of having your image woven into a rug. Even if it's not the best or most accurate representation of your image.

And for that last sentence, you are awesome. Thank you for a much-needed laugh today.

Ya know, when I saw this on your Facebook site, my first thought was, "Why is Merujo holding a rug of Madeleine Albright?" And, ahem, I gotta know, do the drapes match the carpet? ;-)

I think the far scarier picture is in the background.

Ditto about the photo on the wall! I've actually seen the carpet in question and,yes, my first thought was Madeleine Albright ! Could you capitalise on your likeness to a former secretary of state, join a look-a-like agency, that sort of thing ? On reflection, no, probably not much call for that sort of thing...

I would so frame that and hang it somewhere totally conspicuous. Like in the foyer, or above the fireplace. It's the most awesome conversation piece EVER.

Actually, it would be AWESOME to bring it into work and have it hung in the hallway right outside your office. And you could set up some incense and a little money plate...and once you are show proper homage, just maybe you'll do some more editing...