Oh, I think I should feel a little bit bad about this

Some poor soul using a public school system computer in Arizona did a web search for "Dian Fossey discoveries and difficulties" and Google directed him/her to my Interview With a Silverback post.* And, while I am very proud of my fake interview with a gorilla (and wish more people read it), I would hope there is not now a child in Tucson writing a report about great apes using a blog post as research. Especially one featuring a fictional talking silverback discussing his virility and gorilla gas with me via satellite phone.

Then again, part of me hopes it happens.

The same part of me that once told a stoned college student who dialed up the American Embassy in Moscow for help with a paper that Karl Marx was the father of the Marx Brothers and John Lennon was the illegitimate child of Vladimir Lenin.


*I checked. "Interview With a Silverback" shows up on Page 8 of the Google search. Hilarious. And a little sad. Apologies to the late Dian Fossey. My gorilla is 100% fake. 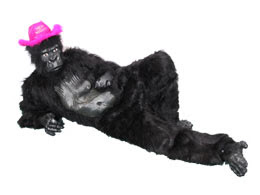 Too funny and yet you know he wrote that paper. I used to visit Karl Marx grave in Highgate Cemetery in London. Long story. I was a member of Friends of the Highgate Cemetery and would do clean-up/landscaping as a volunteer. I think a lot of Christopher Lee vampire movies were shot there..Vincent Price, too. You'd always see Chinese in Mao suits leaving red carnations.