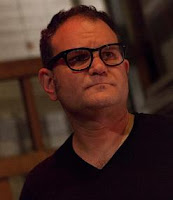 ** And you should go buy The Middleman on DVD. When you're done watching Minotaur and sharing the link with your friends!
Posted by Merujo at 11:50 PM

.well that was different. Reminds me of David Lynch.

Also, I hate it when there's another chick at the party in the same ladder outfit as mine.