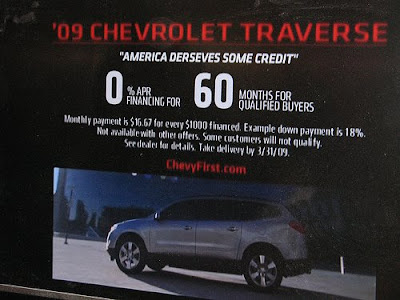 UPDATE: please read the comments on this post to see responses from GM's Director of Social Media, Christopher Barger. I posted a link to this entry on my Twitter account and hash-tagged it with "GM." Mr. Barger found my Tweet, which led him here. Let's hear it for the power and reach of Twitter! And let's hear it for Christopher Barger for his excellent comments. Nicely done, sir!
Posted by Merujo at 4:01 AM

That's priceless. And so very sad!

I suppose they derseve whatever they have coming...

Thanks for the catch - I just brought it to the attention of our advertising team. Not something that should have gone out, obviously. Bad proofreading and I won't excuse it; it wasn't our best foot forward on a day where we really needed to have it out there.

I am not in advertising, but mea maxima culpa anyway and we'll get this fixed. Thanks again for catching it.

Thank you so much for your response to this post. Did you find this via Twitter or Consumerist? I tried to contact GM and Chevy via the web late last night, and each time I clicked on "I have a comment about advertising" options, it merely took me to a policy statement on advertising. I had no option to leave feedback.

I genuinely appreciate you taking the time to respond, and the speed of your response. The Internet can really be an amazing tool.

Found it through Twitter. We try to keep an eye out for when people are mentioning GM, and try to ask questions and listen. (I realize that this sounds like a line, but we do genuinely recognize that if we are to be a new kind of company, we need to be listening a lot more -- and tools like Twitter help us do that much more broadly than we used to be able to.)

In this case, we just messed up - pure and simple. I'm sorry that the Website wasn't really set up to allow you to call it to our attention, but at least we found you this way.

I'll keep reading you now that I know your site. If you'd care to stay in touch, please feel free to follow me on Twitter @cbarger, or to follow @gmblogs (my team engages in social media for our company and while we all have personal Twitter IDs, that's our official corporate one).

We will do our best -- starting with proofreading! -- to earn back your trust and confidence. I hope that over time we can do so. In the meantime thanks again for catching our mistake!

Despite my continued disdain for lack of proofreading, I give GM (or at least this one guy!) a lot of credit for responding this way. Whether or not it might be somewhat of a gimmick, I appreciate the fact that they seem to be actively seeking feedback (positive or negative) and responding to it. Well-written, too. And of course, spelled correctly. Nice to see.

Looks like Mr. Barger is the real deal, and I'm actually impressed by what he and his team are trying to do. There's a good (and fairly short) interview with him here http://tinyurl.com/dh8d38.

Radiocynic - if it's any consolation, I am a proofreading nut too and have disdain for a lack of it as well. (Doesn't mean I don't occasionally mess up anyway though!) :-)

Thanks, all of you, for your responses. I'll look forward to talking with you in the future. My virtual door is always open.

Wow. First, thanks to James for the interview link. Neat stuff.

Not to get too over-the-top here, but I'm unusually impressed by this. At a time when many of us are besieged by the apparent impersonal and self-important nature of corporate America, this whole idea seems to run contrary, yet still benefits the corporation as well!

@Christopher -- Believe me, I'm extremely far from perfect; didn't mean to imply otherwise. I give you (and by association, GM,) major credit for this idea, and for the refreshing thoughtfulness of your responses. Best of luck with this project at what must be a challenging time, to say the least.

But cool that Mr. Barger is paying attention and the GM is astute enough to see the value of social media.

Two points to you, MJ!

Thanks for the kudos and all, I wish it felt more groundbreaking. I guess I kind of feel like what we're doing is more "duh!" than Wow. Duh, as in "we should have been doing more of this all along."

"Challenging" times indeed... but my fervent hope (and honest belief) is that my company is going to come through this learning as much as I have on a personal basis. What I'm most energized about is the potential we have here to actually engage with people and learn more about how we can win the American people back.

There's a real lemonade from lemons moment making itself available to us right now: yes, this really hurts to go through, but if we emerge from it a company that has learned to really be responsive to and inclusive of consumers, then we'll be better for it in the long run. Where perceptions of us are outdated or inaccurate, we can offer new information; but where perceptions of us are accurate or fair, what a chance for us to learn what we need to do to win people back! If expectations are unrealistic, we'll be able to say so and say why... but I am quite sure we'll also hear a lot of things that fall into the "why wouldn't we do that? I never thought of that" category.

Anyway, I don't want to highjack MJ's conversations here, so I'll leave this to each of you. If you'd ever care to share with me the kinds of things you'd need to see from a new GM, the hopes you'd have for us to build into the future of our company or our industry, I'm always available to hear them, via Twitter or via interactions in this community. Not saying we'd be able to do everything, but I'd really love to learn from you what it would take for us to earn your business in the future.

But trust me, I'm not going to come out here and sell at you. I promise to just be part of the crowd, chiming in every now and then. And with that, we now return you to your regularly scheduled MJ!

Look what happens when I don't visit for a day.

I work in interactive, and my clients actually refuse to listen to what's going on online. For a list of reasons that I won't go into, they don't realize that even if you don't pay attention, these conversations will happen regardless. It's nice to see that GM is paying attention.

Randy, you should be unusually impressed, because even though the tools are out there for companies to pay attention, a lot don't. And if they do, it's often for competitive reasons and not for customer service.

Quite true. And the coolest thing, which I was attempting to allude to earlier, is that GM does get a competetive benefit as well. It enhances their image at a time when that's sorely needed. (At least it's enhanced amongst my particular psychographic of "people impressed by any polite and thoughtful discourse on the internet"!)