I took a friend to the airport at what he describes as "oh dark thirty" this morning. I felt like death warmed over when the alarm went off at 4:30. I hit the snooze until 4:55. I'd taken a shower at midnight, so I wouldn't have to go out with damp hair into a chilly autumn morning. Clothes thrown on, glasses on fuzzy eyes (even the good one), I headed out to Mickey D's to grab my buddy some breakfast. He was taking one of those sad trips home. The kind most of us have been on before, where there is little joy in the homecoming, and farewells no one wants to grant.

The least I could do was provide the craptacular carbs to carry him through TSA and down the liquidless jetway.

By 6 a.m., the traffic to Baltimore looked the same as a midday trek to Charm City. Too many cars and too many people making dangerous choices. We hit BWI at 6:30 and couldn't find the door for United. One more trip around the airport and a polite request to a surly cop, and we'd found the right spot. (Of course, United is the one airline without an illuminated sign right now. Go figure.)

See you on Tuesday.

And I headed in to Baltimore.

It's been a long time since I spent more than a few minutes in Baltimore. Back in the Homicide days, I hovered and watched and envied the folks involved in that creative TV process down in Fells Point. But those days are over, and Baltimore isn't a regular destination anymore. I decided to take my camera down to Fells Point and snap some early morning pictures.

The sunrise was absolutely gorgeous. I kept thinking, as I drove in toward downtown and the Inner Harbor, that it was a "Hollywood sunrise." So good as to seem manufactured. I drove past Camden Yards and cruised along the Inner Harbor with its beautiful views on the water and overpriced food and goods. I drove through Little Italy, skirting the housing projects that played such a large role in Homicide. Usually, I drive down Pratt Street, right through the projects to Fells Point, but I got in the wrong lane and passed under the twinkle light sign reading "Little Italy", still lit up in the fading dark.

In two or three minutes, I was in Fells Point, still silent at 7 a.m., except for two street cleaners having a loud argument at the corner of Thames and Broadway. I parked, took some pictures of the Fells Point Recreational Pier (former production office and set of Homicide) and headed to the Daily Grind for a cup of the Key Brother's fine coffee before heading back home to Bethesda in the middle of Friday rush hour traffic... 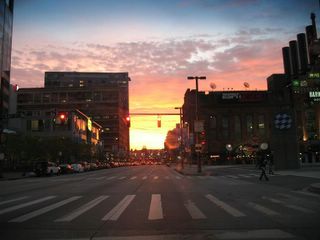 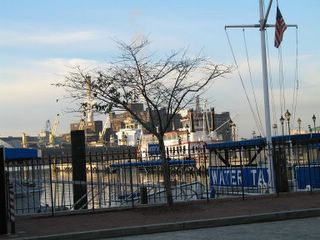 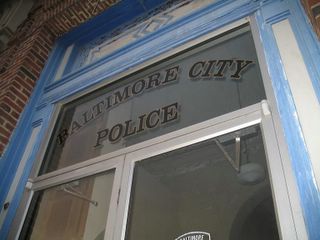 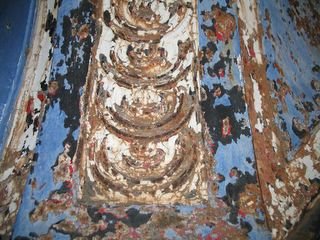 But the TV paint - and the memories - are fading away. 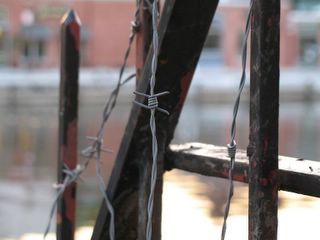 An effective way to keep folks from climbing out on the water's edge and falling in. 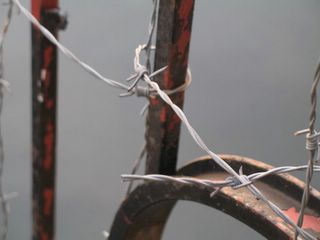 The "macro" feature on my camera works well. If only my skills could match what the camera has going for it! 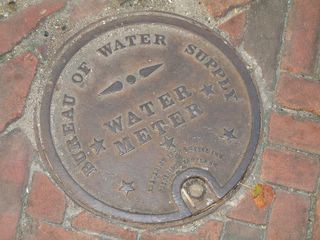 I love the utilitarian design of things like this. Somewhere I have a great photo of a similar access point in Rome, where the manhole covers are still marked "SPQR" for "Senatus Populusque Romanus." Neat, huh? 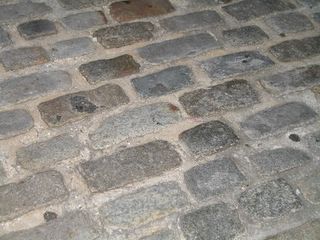 The bricks of Thames Street, Fells Point. I love the sound of driving over them. 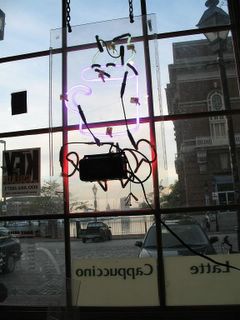 Inside the Daily Grind. Some of the best damn coffee. Ever. 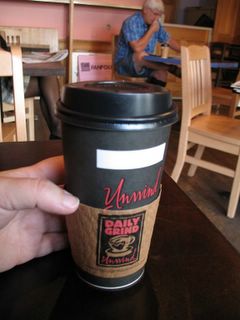 I have no idea how they make their cafe mocha so smooth. It's like drinking supercharged silk. They mix it with hot cocoa powder, which gives it a taste reminiscent of childhood. On crack. (Of course I managed to snap this photo just as the old guy at the back table picked his nose. I have a gift, eh?) 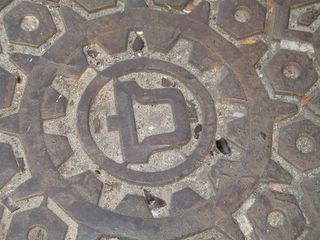 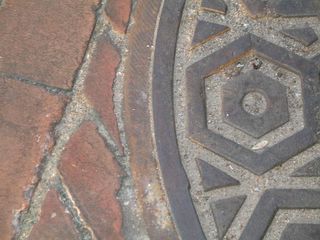 I love the contrast of the sidewalk pavers with the manhole cover. Coolness. 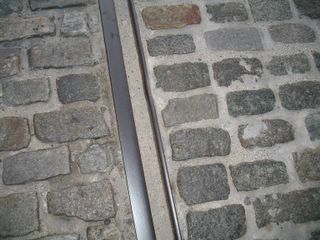 Street car tracks, Fells Point. I bet it was cool when they still had street cars. My hometown once had 'em, too. 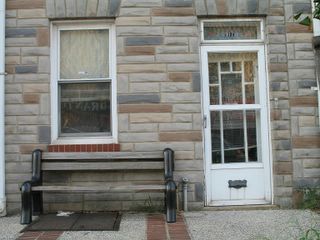 Baltimore row house, Little Italy. This is the stereotypical Bal'mer row house front. The fake stone cladding is a Baltimore peculiarity that became THE thing to do in the 1960s. Apparently, if you rent the DVD of Tin Men, one of the extras is a John Waters' documentary on Baltimore's fake stone phenomenon. Weird, but you've gotta love it. 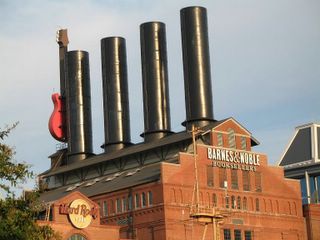 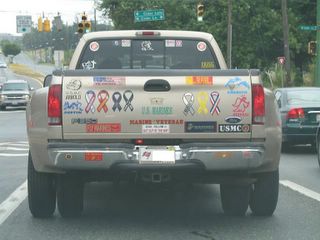 On the road home. Just a wee bit of patriotic overkill, no? 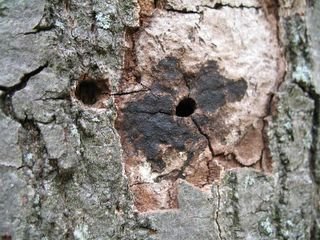 The woodpecker-devastated tree in front of my building 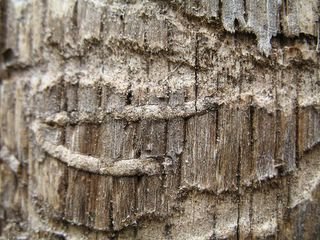 It's about to be cut down by the county... 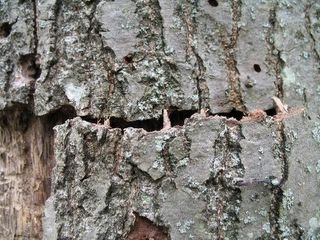 At this point, it looks a little like a toothless old man, ready for the end...

And to my friend, by now back down on the ground, a peaceful weekend. I'll be thinking of you.
Posted by Merujo at 10:35 AM

Nice pictures. You had a busy morning.

cool pics. that's so much more motivation than i'd be able to muster at that time of day.

Greats pics. That isn't how I see Baltimore, at least lately, but I want to.
Thanks

I like that Power Station...and really, I think it's cool that it's being used for shopping rather than sitting derelict or being knocked down and replaced. We've got so many mills down here that are going out of business, and they're a part of history. I hope something can be done with them to keep the buildings intact.

One of them, at least, has been preserved as a museum and office park.