Maybe some higher power figured I'd been through enough crap for the week. Maybe karma was on a smoke break from kicking my ass. I don't care what the reason was, I just know we were lucky.

Initially, it sounded like someone skateboarding outside. I thought, "Damn, it's a little late and little dark for that, no?" But then came the tremendous powerful sound of the tree cracking and falling. I had no idea how close it was to me. I know it was over in mere seconds, but it felt - and sounded - like slow motion.

I'd go take some flash photos, but there are freaked out people trying to get branches off their cars right now. I don't think they'd appreciate my half-assed efforts at nighttime photojournalism.

One guy is just saying,"Omigod, omigod" over and over again. Poor SOB.

Update - had to go out to talk to the police, as my drunk downstairs neighbor was so wasted he couldn't string together enough words to describe what had happened. So, I took some photos. Please keep in mind, I still suck at nighttime photography with my little Canon: 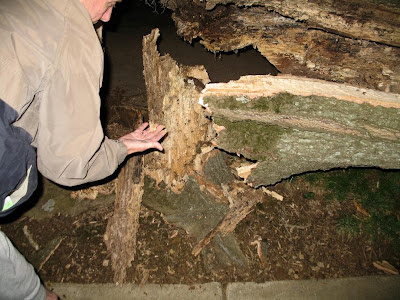 Drunk neighbor checks hand for splinters after petting the tree.
Yes. *Petting* the tree.
Film at 11. 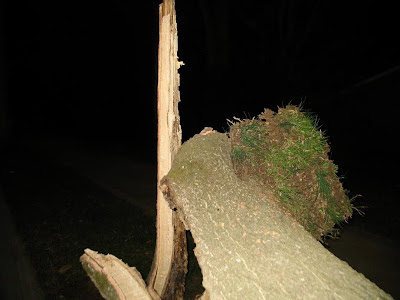 The last vestiges of life that had been holding this huge sucker up. 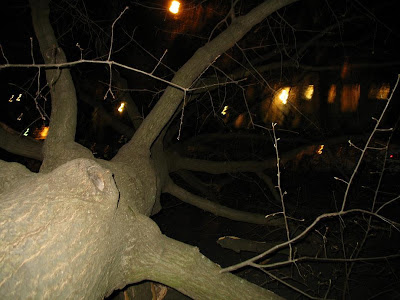 The enormous trunk lying across the street. 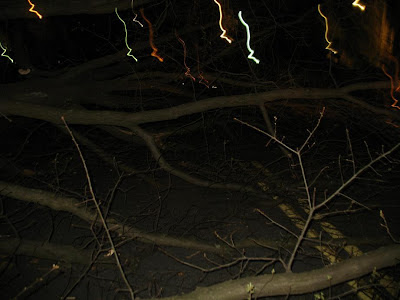 Smaller branches (they are all over the street.) 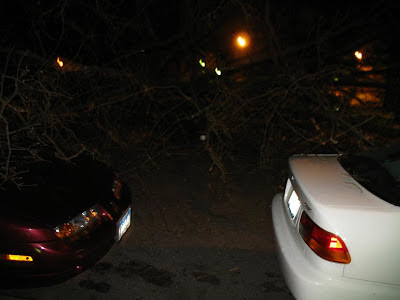 Crappy photo of the least damaged of the cars on my side of the street. Right between these two guys? Where the bulk of the tree now lies? That's where the Sasquatch and I were. Eeeeeek. I had to go find the nice people who own that burgundy car to let them know they had a tree on/in their windshield. Oof.

I didn't take photos of the crushed cars - I just didn't want to get in the hair of the folks who are already stressed out.

I hear guys with walkie-talkies outside now - that distinctive Nextel beep is echoing across the street. The nice MoCo cop who came to the scene put in the call for someone to come remove the tree, and they sure arrived with great haste. I anticipate a loud night of chainsaws. What fun!

The people who own the white car pictured above just came home -- they'd had a party earlier in the evening and everyone went off with their sad-looking designated driver to some bar, drunk as skunks. They're having a little freak-out in the street right now over how damn lucky they are. Drunk, happy, and damn lucky.
Posted by Merujo at 11:02 PM

It's about time the bad karma guy was busy elsewhere. A tree on top of you and/or even just his car would have been a bad thing - don't ya love my understatement. Rest as much as possible. I know the drug cocktail will help with that! I hope you get some good advice from the lawyer because this whole situation is unfair and should be illegal for insurance companies to put people in this situation.

Trees falling on cars = not fun! Granted, I never had a whole tree fall on my car, but I have had an enormous branch break off my car in a violent storm and land on my car. The resulting damage: a crushed roof, shattered windshield and dented hood. I had to have all of those repaired, had the car back all nice and pretty for all of two weeks, and then it was stolen by a couple of skanky, rank wankers (alliteration intended) who went to triple XXX peep shows, smoked weed in my car, and God only knows what else they did. When the police recovered and returned my car to me, I wished an entire tree had fallen on it and totaled it. That would have been a blessing compared to what I got back. (And what is my point in all this? I'm just rambling. Don't mind me...)

Here's hoping the chainsaws didn't buzz too far into the morning...