My mother was 44 years old when I was born. I'm so damn tired most days, I have no idea how the hell she dealt with a newborn *and* eight other children at the same time. Okay, so my oldest sister was 20 by then, so maybe you can discount her as a "child" at that point, but still...

Hard to believe I've made it this far with so little to show for it. No marriage or children. No house. A (recent) series of crashed cars and nasty spinal injuries. A job at a place I love, but with the same career trajectory as the little mountain climber in the Price Is Right "Cliffhangers" game. 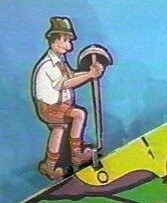 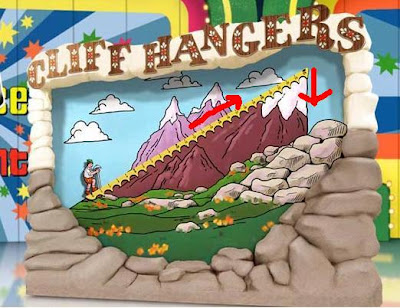 Okay, I'm exaggerating, but I honestly thought I'd be a little higher on the food chain by now.

Then again, don't we all? I mean, here I am TWENTY years ago: 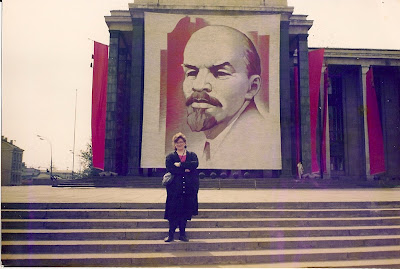 Me, on the steps of the Lenin Library, near Red Square, Moscow
Now, that girl was going places! Of course, I killed so many brain cells on cheap vodka and champagne over the course of four years in Mutha Russia, I probably derailed the My Brilliant Career gravy train without ever noticing.

BTW, here is a short list of jobs I've turned down over the years:

1. Moving company manager for all of Mutha Russia (too many foreign business folks found dead in ditches back then to make it attractive)
2. Russian heavy metal lyric translator in London (seriously - that job was offered to me at the bar in the Hard Rock Cafe on my 21st birthday in 1986 by a producer from Island Records - should have taken it, but I think my mother would have killed me for not finishing my college degree)
3. Hooker. (That was in Central Asia. And I'm still not sure if the offer was to really be a hooker or just a third wife or something similiar...)

Ah well. All water under the bridge. (Or flooding it, crushing it, and dragging it down river.) I may not have a very upwardly mobile job these days, but I work with some seriously awesome people at a really amazing place. And we have our own theme music. By Elmer Bernstein, no less! (And yeah, that music still gives me chills like it did when I was a little kid.)
And so, here I am. Still alive. Still kickin'. Kinda. If you count limping and screaming "OW OW OW" as you go "kickin'"...

I'm hoping for a very good birthday tomorrow. No party. No cake. But I am going off the grid for a few days. No Facebook beyond sending a few birthday greetings of my own in the morning, no rampant Twittering. It's Alone Time for Merujo. Hopefully, by the end of the week, I'll have tapped out a good number of words, some of which may lead down a very intriguing path. One I'll tell you about later, if it pans out.

And, if my back (which has caused me a lot of pain and tears this week) decides to cooperate, maybe I'll do a little hiking and archery.

Me, with sharp, pointy sticks. Alert the media. And the police. And the paramedics.

Happy birthday! Hope your offline time goes awesomely and your back is cooperative.

I love that theme song. It gives me chills, too. And I love you! Hope you have a very, very happy birthday, Merujo.

Happy birthday! I knew but I've always been so impressed that you worked in Russia in your 20s. A woman who can do that can do anything. For real. Wishing you an amazing year ahead!

Happy birthday little sister! Hope you can just unwind and relax. Maybe you'll have a "Geistesblitz" and things will REALLY START MOVIN'

Happy Birthday. Hope you enjoy your time off the grid.

Offline time is peaceful. I hope you had an excellent birthday and have a lovely, groovy week!

achem...soooo the next time there is cheap vodka ANd champagne...i am expecting an invite! happy birthday kiddo! xoxo