A red letter day on a blue Monday

So, today was supposedly the unhappiest day of the year. Huh. Could have fooled me.

Sure, I was having some bad-ass eye problems today. (More on that after I see the eye guy again on Wednesday.) But that's the norm now.

One of my huge work projects was put to bed, thankya jeeezus! My blog got a quickie mention in the Express paper edition (re: Henry Rollins), and I actually found street parking for my car directly outside my office. A banner day for me, by any accounting.

But the day's wrap-up was the real highlight. Just as I was pondering staying late and digging through the K2-sized pile of crap on my desk, an e-mail popped up with an invite to a sneak preview at the Regal in Chinatown: "RENO 911! Miami!" Oh heck yeah! The trailer had cracked me up, and I love the series on Comedy Central. Lt. Jim Dangle and his hotty-hot-hot criminally awful uniform hot pants? Too freaking funny. So, I hit the road for Chinatown. Free validated three-hour parking at Gallery Place for moviegoers is probably one of the best deals in the whole area.

Also, I had a birthday certificate from the Aveda Institute around the corner on 7th for a free custom-blended "pure-fume" spray - and who is Ms. Broke-Ass Cheapskate 2007 to turn down a lovely, free, $20-value perfume spray??? I parked, I hobbled to Aveda and closed my eyes for five minutes while a member of my favorite beauty cult offered up scents for me to test drive (with a nice cleansing whiff of coffee beans between each one.) I ended up with "Water #6" which is a clean, earthy scent that makes me pretty happy and calm. I dig it. I think it'll stay in my purse for use on high stress days.

Scent in hand, I hobbled back into Gallery Place and headed up to the Regal Cinemas on the third floor. There was already a sizeable line of sneak preview goers when I arrived - mostly folks in their 20s and 30s. A young guy with a British accent (who was either with the marketing firm or 20th Century Fox) collected glossy tickets from some of the folks in line. I got to hold onto my crumpled e-mail. Just as the line started to move, a woman announced that cameraphones and cameras would not be allowed inside. Nice. A little late for that, don't you think? I got the impression that every other person in line had a camera phone. Some folks got grumpy, and a bargain was brokered. One of the screeners was given a sheet of red stickers. As we entered the theater, we turned in our cameraphones and were given a corresponding numbered sticker. I stuck mine firmly at the bottom of my Aveda bag, as I had this vision of coming out of the film sans sticker, unable to reclaim my phone.

One brilliant advantage to this situation? A full theater and not a single annoying ringtone for the whole show. Fantastic.

Just before the movie started, whoops and hollers erupted from the audience behind me. Coming down to the front of the theater were Thomas Lennon, Ben Garant, and Niecy Nash, better known to TV viewers as Lt. Jim Dangle, Deputy Travis Junior, and Deputy Raineesha Williams. They were all in their gear - Dangle in his hideous hot pants, Junior in his bulletproof vest, and Raineesha with her makeup and hair to the nines. They were hilarious. And Raineesha, having drawn the short straw to give the introduction speech instead quoted 50 Cent. The audience was delighted. Lennon and Garant are two of the creators/writers of "Reno 911!" - both the series and the movie. Lennon, along with "Reno" co-creator Kerri Kenney, starred in one of my very first Comedy Central addictions, "Viva Variety!" with Michael Ian Black. (Why so many links? Because these people are incredibly talented, but just don't get enough credit!!) 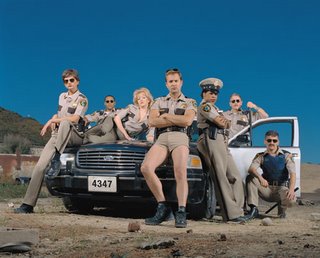 Of course, I ended up with Couple Who Couldn't Shut Up sitting next to me, but I managed to ignore them for most of the movie. Plus, the film was just fun, which made it easier to blow off the talkers.

Silly fun. Sometimes grotesque. Great little cameos by Patton Oswalt, Danny DeVito, The Rock, PeeWee Herman, series regular Nick Swardson, and others. It's not exactly high comedy. There are sex laughs and drug laughs and general silliness. If you are a fan of the show, you'll get a kick out of it. I laughed for 90 minutes. A good cleansing laugh.

And then, I sat in my car on H Street and ate a Five Guys burger while reading Entertainment Weekly. Yeah, I'm lame. Yeah, I have no social life. But if you're going to spend a night on your own "out on the town", there's something to be said for free perfume, a free movie, free parking, getting to laugh yourself silly, and then just eatin' a burger in your car in Chinatown in winter at 10 o' clock on a Monday night.

Blue Monday my ass. If today was blue, I'll take a gallon of that color, please! 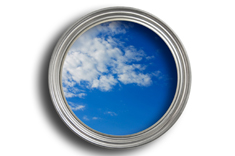 Doesn't sound at all lame to me. Sounds to me like a great evening! And I just might have to give Reno 911! another chance...

Could have been worse. Could have wound up seated next to Pee Wee.

sounds like a wonderful day. glad it was good :)

Don't you sometimes wish everyone had a publicly accessible webpage you could link? Nice that you can link to all the celebrities, but I would follow the link to Couple That Couldn't Shut Up just so I'd know who to steer clear of next time I was in a movie theater.

Oh and THANK YOU for reminding me about Five Guys. I forgot all about them in the years since I called D.C. home and now I have a craving...

If that's having "no life," then I need to rethink my priorities! :)

I've read your blog for a couple of years - followed your link from FA-DIAB. In fact, yours is the only blog I read on a regular basis. You're a great, enticing writer and I share your delight in a great Monday.