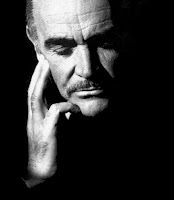 Sean Connery was at my place of employment today. Much to my dismay, I did not see him. However, the security guard in the lobby below my office got to meet him when he came in. And, I swear to god, he introduced himself to her as "Bond. James Bond."

When I left work this afternoon, said security guard was still swooning and grinning from ear to ear. I think she'll be living off that story for quite some time to come. 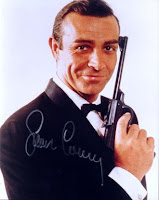 Had I seen him, I would have been torn between being all swoony myself over Dr. Jones/James Bond/Ramirez the Immortal and silently giggling, thinking about SNL "Celebrity Jeopardy!"

I probably would have swooned in person and then giggled later. Why choose?

By the way, Nicholas Cage, Helen Mirren and others are in town right now filming the sequel to "National Treasure." I guess Dame Helen is slumming it after her Oscar win. To be honest, I enjoyed "National Treasure" - it was a guilty pleasure for me the summer it came out. So, hopefully, while certainly not Oscar-worthy, the sequel will be a hoot, too.

Hmm... sequel news makes me wonder... will Connery return to the Indiana Jones saga at all for the last film? Geriatric Jones? Old and Older? Don't care. Connery and Ford would be fabulous eye candy at any age. 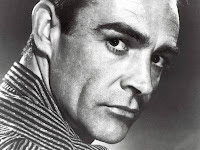 Geriatric Jones and the Curse of the Adult Diaper.

I am so afraid of that movie. Unless they do it all in CGI and have the original actors do voices only, I can't see how it can be anything like the others. I'm terrified that for the sake of adding a bunch of action, they'll introduce a "successor"--maybe a cousin, a friend, an illegitimate child by Marion. And we've all seen the last episode of MacGyver. (Haven't we?) No need to relive it. It's been done!

Anyway, I would love it if Sean Connery introduced himself to me as Bond. James Bond. Although my favorite Bond (up until the most recent film anyway--now there's a debate in my head) is Roger Moore.

I liked National Treasure too. It was fun!

Now there's a celebrity sighting I'd love to have. Instead, I get to see Trent Lott at the Caucus Room. Somehow, not even the same. Phffffft.

I thought National Treasure was fun -- when you're subjected to any number of annoying family movies, your standards are lowered.

Along that same line, I highly recommend The Last Mimsy to the parental sector.

You'll rue the day you crossed me, Trebek!

I loved this story when you IMd me - and still love it.

Also - fully agree about National Treasure; it is totally cheesy, but watch it whenever it's on.