All Quiet on the Mid-Atlantic Front

Despite gas prices, it looks like most of the people here in the DC 'burbs have headed to the beach for summer's last gasp. It's a 3-hour drive under the best of circumstances, so, fuel costs, crowds, and my lack of cash taken into account, I'm staying put. It's very quiet, and I'm enjoying an afternoon at the coffee shop in King Farm. 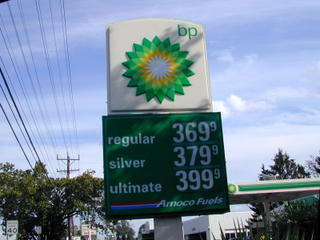 Rockville, Maryland fuel price today.
No, thanks.
The Mayorga Coffee in Bethesda closed on August 31st. I was really saddened to see that, but their location was horrible - little foot traffic and too far from the center of Bethesda yuppidom to make much of a buzz. Plus, the folks at the Mayorga up here tell me that the original Bethesda franchisee ripped them off big time - when she decided to abandon the business, she took a few things with her - like the furniture, the espresso machines, and a whole lotta beans. Sad. But at least the other Mayorga locations are thriving. Again, gas prices will keep me from hanging out in King Farm much, but, on a lonely holiday Saturday, it's pleasant to sit here and listen to old Motown and Steely Dan and have some mighty fine caffeine. 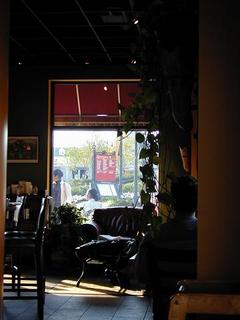 The view from where I am right now.
Shady, cool, and caffeinated.
The Make Out Couple has arrived. These two annoy the snot out of me. They're here virtually every time I am. They look to be thirty-ish and show up with their PowerBooks, ostensibly to work, write, whatever. Instead, they stand next to their table and make out. I don't mean a little peck on the check here or there. It's ass-grabbing tonsil-hockey, with audible "mmm's", groans, and lip-smacking. True love is beautiful. Audible, ass-grabbing love in the coffee shop is a little much. Fortunately, I took a table in a little alcove today - no immediate neighbors. I feel for the guy seated next to the Make Out Couple. Bet he moves in a minute or two...

Don't look, Marion! Don't look!
I avoid eye (and ass) contact with the Make Out Couple.

Aaaaand, let the ass-grabbing begin! It's amazing. It only took them two minutes to start - just enough time for them to set up their computers. Maybe they both live with their parents. In a one-room apartment. And they have no privacy. Either that, or they just dig getting each other hot and bothered in a glass-fronted shop. Who knows? I've often thought of asking them why they wait for the coffee shop to feel each other up, but then again, I don't really want to engage in conversation.

HA! The guy at the next table just told them to get a room. BEAUTIFUL! That's funny. They've cut the slobbering short. And there is now blissful silence again, save for the music and the sound of the espresso machine.

Do not taunt Happy Fun Ball!
Trying not to smirk at the squelched smoochfest.
The sun's starting to set, and I've done nothing today. I had this short list of things to accomplish, including finishing a short story. I'll try to do that tonight. I feel like I need to get some of these half-completed things done and do some groveling to magazines. If I fail, I fail, but if I don't try, what does that say about me? If I can write here day after day, I can finish a story or two. I have one chick-lit-ish story and one creepy story to finish. I can't really gauge my skill at fiction writing. I used to win contests as a kid, but then I was writing about pretty unicorns (and I was a lousy proofreader then, too) and other girly stuff. I have no clue if the stuff I write now is even tolerable.

I remember, my first year in college, my mom sent me a clipping from our local newspaper. My high school literary magazine had won a couple of awards for the edition we published my senior year. One of the prizes was for a piece I'd written. I tried to get in touch with the faculty advisor of the magazine to find out about the award, and how I could get documentation of it. Credit where credit is due. The advisor that year was a regionally-known children's author - a Hobbit-ish man with a Napoleon complex and no desire to share any acclaim - he was a medium-sized fish in a sparsely populated small pond. He informed my mother that the award belonged to the high school, and he refused to even provide me with a copy of the award text. Ass.

I showed up at the high school when I was on spring break that year and tried to confront him. He refused to see me. Again, ass. I suddenly knew what it felt like to have your creativity co-opted. Pissed me off. He's deceased now. I never did find out exactly what I'd won.

I had a visiting professor steal my research on my honors thesis in college. She had the balls (or the stupidity) to present my thesis as a lecture... in a class I attended. That one almost cost her a job. It was ugly and she then conveniently lost all my papers and my final exam for that class after she was reprimanded for the research theft. (I was given an A after the department head ripped the prof a new one for a second time.)

More than a year later, when I was in Moscow, I received a large packet with a return address at the University of Minnesota. It was my research, my papers, and my exam book for that course. The visiting prof had written me a letter of apology, said she was going through a nervous breakdown, and here was all my work. She'd sent it to the records office at my college (Macalester), and they tracked me down in Russia. I shredded the whole kit and kaboodle without even looking it over.

I wasn't ever going to be a real Russian historian. I was living Russian history. And drinking a lot of champagne. And wondering why the hell I'd ever gotten a degree in Russian Studies in the first place.

I still do have a copy of my thesis, by the way. It's a review of the constitutionality and legality of the Soviet criminal code and its use against dissident writers in the 1960s. I took the position that the code was legit and that we, in acknowledging the legitimacy of the Soviet constitution, had to accept their rulings on dissident writers as okee dokee. Feh. I was just playing devil's advocate because I could, snarky youngster that I was. In retrospect, I think it sucks. But the thesis committee was impressed that I'd compressed 2 years of research and writing into one semester. So, I got highest honors. (They didn't know it was all I had left at college - my friends were busy getting laid and having fun and living life and doing all the things young people are supposed to do. They had life. I had the thesis. And coffee.)

Sun's just about down. Time to go home.

This is one of my favorite posts.

I so admire how you are able to take your thoughts and string them along from the abstract into the concrete - the written word.

My mind is a jumble of perceptions and experiences, but they lay all tangled like knotted yarn in my brain. I am never able to unravel them and put them to paper. You have a gift for doing that and doing it very well. I hope that even after you return to work full time that you still continue to journal often.

Regarding the "make out" couple...

How sad... because in truth, they have very little respect for each other or they wouldn't put each other on display like that. I remember as a kid hearing a line from an old 50's or 60's movie:

"Love makes you a better person".

It is a saying that I have held to be an ultimate truth. Those two people, moaning, groping and french kissing in the coffee house don't love each other, actually they are incredibly self-centered. It is that 'shared' quality that they will ultimately turn upon each other. When selfishness meets selfishness head on, it is not a beautiful thing.

So, kudos to the guy that told them to get a room. We need more boundaries in society and I admire people that speak out when they see others crossing the line and invading the personal space of other people.

Thanks again for sharing your mind.