Anyone attempting to leave DC on Friday afternoon was met with hellish traffic in every direction. I heard that I-95 south of the District had a 50-mile backup that didn't really move until late evening. I felt bad for those poor bastards, especially as they were all burning $3.05/gallon gas, going nowhere.

Just getting out of downtown proved to be fairly bizarre, as my departure from work coincided with a strange Easter parade on Connecticut Avenue, bringing traffic to a complete standstill. I grew up in the Catholic Church, and, specifically, in a town with a very large Mexican population. I am relatively familiar with most of the festivals and traditions specific to Mexican Catholicism. However, I'm not as well-versed in some of the rituals in other parts of Latin America, and DC has a very, very large Central American population.

There was the "Our Lady of Guadalupe" statue (check), an "Infant of Prague"-type statue (check)... and then came the freaky-deaky part: hefted on the shoulders of several men, an adult-size glass casket, the panes held together in gold, with a lifesize dead Jesus statue inside.

He was lying on his side, in a sort of fetal ball, blood coming from his hands, feet, and head, with lilies tossed over him.

In a big glass casket.

Seriously, folks - I've seen a lot of odd stuff, but this definitely ranks up there.

Add to this the incredibly loud chicken squawks coming from the minivan next to me when I finally reached Friendship Heights. I crept up alongside the open passenger window, curious to know what the hell was going on. Turns out, the driver had the biggest stereo speakers I'd ever seen crammed into an Aerostar, all hooked up to a DVD player. He was watching home movies of cockfighting while he drove up Wisconsin Avenue. 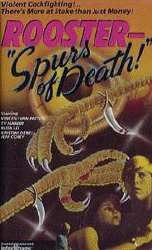 Yes, it's just another Easter weekend in Washington, DC.

Hippity hoppity. Someone give me some Advil, please.
Posted by Merujo at 10:17 PM

Were the 7 dwarves in attendance? (sorry, couldn't resist).

I grew up in a town with a heavy Catholic presence and I think they just had the big cross they carried through town.

You know what? Lifesize Dead Jesus would be a great name for a band.

Maybe we should found it?

I'll play the triangle and the ocarina if you sing lead vocals.