In case you've missed it, Conan O'Brien has developed quite the relationship with Finland. "Late Night with Conan O'Brien" is broadcast on a Finnish cable TV channel, and, more and more often, there are Finns in his studio audience. I love it - he makes a point of introducing them. "Everyone say 'hi' to Jukka!"

Conan has become somewhat of a sensation in Finland this year, as he bears a pretty amusing resemblance to Finland's red-headed president, Tarja Halonen. Conan even did fake campaign commercials for her as segments on his show - all in Finnish. 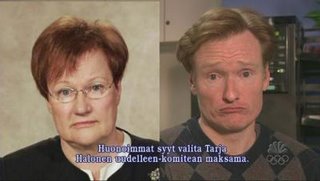 My favorite fake campaign ad was Conan sitting with two Finnish-speaking actors discussing the candidates around an ice-fishing hole. After jokingly talking about the benefits of re-electing Halonen and taking a swipe at her opponent, a fish jumps out of the hole. Says Conan in halting Finnish, "See? Fish commit suicide just at the mention of her opponent's name!" It was all a joke - for the benefit of O'Brien's growing Finnish audience, but it actually became a campaign topic in Finland - was O'Brien's joking affecting the election? (Halonen's opponent was not amused, though I doubt the occasional joke from a late night American TV comedian really made a profound effect on the voting results.) 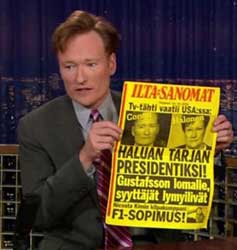 During the Olympics, O'Brien made a sojourn to Finland, where he received an overwhelmingly kind and positive welcome. He was feted by President Halonen and chased by paparazzi, which had to be quite something for the pale, skinny, very self-deprecating O'Brien. I get the impression that Conan was really amazed by his popularity with Finnish viewers.

Tonight, his show is devoted exclusively to his trek to Finland. I can't wait to see it. Sometimes his humor is spot on, sometimes it misses, and sometimes it makes me squirm with discomfort. Let's see where his off-kilter sense of fun takes us this time.

I'm trying to imagine him waking up to the breakfast buffet at the Hotel Presidentii in Helsinki. I remember my first stay in Finland - for Americans raised on "Rudolph, the Red-Nosed Reindeer," seeing reindeer meat on the breakfast menu is a shock at first. (But it's pretty damn tasty.)

Hee. I used to greet our Finnish drivers in Moscow with "Hyvä, hyvä!" all the time. Apparently, even with one word, I had a terrible accent in Finnish!

(Everything I say in anything other than English comes out with a Russian accent. LOL!)

I am sure that me and many others will be watching TV tonight here in Finland!
Greetings from sunny yet chilly Finland!

Dropped by first time by don't know what link now, and let me tell ya -- this entry is fantastic. Reminds me of a shithole job I had during my senior year in college. Except I was one of those skinny hot bitches the resident misogynist couldn't stand because I -- what? -- wouldn't fuck him if he was the last guy on earth? Anyhey, you're a great writer, M! Hope to find the time to drop by again :)