Much to my irritation, I got spammed today because I have (well, had) my e-mail addy on my profile page. It's gone now. I had it up there in case folks wanted to send me a personal message. However, now that I've received some awfully chatty spam that actually had the chutzpah to say it had picked my e-mail addy off my Blogger profile, it ain't there no more. Grrr. 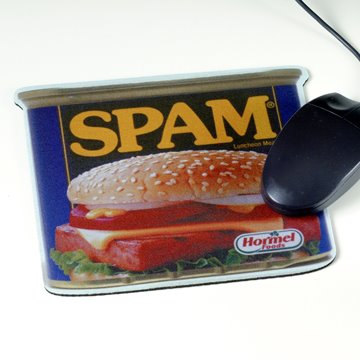 Real SPAM on the other hand, makes for a tasty meal when you're camping. Honest - it does. Spam fried up in a pan with potatoes, green beans, and onions? Yum. I understand that Hawaii thrives on SPAM. In fact, this article even has a Hawaiian recipe for Teriyaki SPAM Stir-Fry.

I can't help but wonder if the cast & crew of "Lost" has developed a taste for SPAM during their time in Hawaii... You know, maybe instead of mac and cheese, the Lost folk should have found a pallet of SPAM tins in last night's episode. Then, SPAM could have had a great promotional tie-in: limited edition "Lost" SPAM. Collect each character's special tin! I want my Hurley SPAM tin!! (This is one of those moments when I wish I had mad Photoshoppin' skillz...)

Hey, I got two Lockes. Trade you a Locke for a Hurley...

I think I need some ibuprofen. My wrist and my left leg have finally started to hurt. Damn stupid Murano driver. Murano moron. Grrr.
Posted by Merujo at 3:33 PM

Ooooh ouch. Sorry to hear about the bump. Being an advil ho at least once a month...I highly recommend it.

And sign me up for a Collectible Sawyer Spam. I hope the can is dimpled! I'll fry him up ever so gently.

You could try putting your email in the about section so you can add spaces, write out 'at' and 'dot.' It's worked pretty well for me and puts it close to the same spot in the sidebar.