To you, ladies, on International Women's Day! 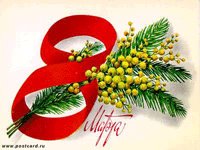 It's not much of a holiday at all here in the United States, but in the developing world - and all throughout that old Eastern Bloc - today is quite the event for women. International Women's Day was a sacred ritual in the Soviet Union, with men bringing their wives and mothers (and female coworkers) flowers, chocolates, cakes... sometimes booze... in honor of their strength, beauty, abilities, you name it.

For most Soviet women, it meant the only day of the year when their husbands and boyfriends and sons cooked, cleaned, and lavished them with respectful attention. On the 8th of March (8 марта), like well-programmed pod people, Russian men uniformly were seen on the street bearing flowers and sweets and the makings of a meal. If you saw a man without such accoutrements, you had to assume he was single or divorced or widowed - or his mom didn't live in the same city. 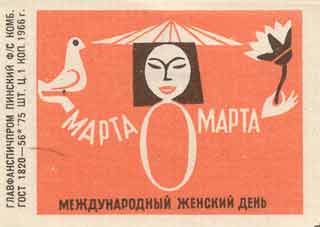 I assume it's still the same way in Russia and most of its old, crumbled empire. At my old job, if we had a visiting post-Soviet delegation in on the 8th of March, the men would bring flowers for us all and a representative from the male contingent would make a short, but sweeping speech in our honor. (Then, they'd usually want to get together after work for one of their "hotel suite happy hours" which always featured vodka, wine, bread, sausage, pickles, more vodka, and even more wine.) It was sometimes touching, sometimes pleasant, and... well, mostly patronizing. (But I'm saying that from my very American perspective.)

I send out greetings of the day to female friends and coworkers, most of whom are unfamiliar with the holiday. I imagine that my friend, the Alasko-American, who is spending her very last day at Job X today (good for you, chiquita!) is getting gifts and flowers from her very last Russian delegation. On top of it, it's the Alasko-American's 29th birthday. Have a happy one, my friend. Can't think of a better way to celebrate that liberating yourself from the Hell Job on International Women's Day. Just too beautiful. 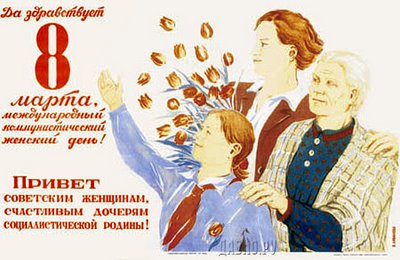 So, have a good one, women of the world. Enjoy your day. As for me? I'm going out to see some women friends I haven't seen in a very long time. We're going to have a long nosh and yak at a little Mediterranean place and go see the gay cowboy movie. How's that for a Chick Night? 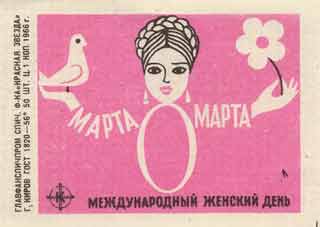 Other cultures honor women and girls as well. March 3rd is Girl's Day or Hina Matsuri in Japan (also known as Peach Blossom Festival). People pray for the girl's happiness and health, eat special food and special hina dolls used to be created. Now they probably all get Hello Kitty or something. It's never going to fly in this country. We'd sooner pick up the "Double Whopper With Cheese" Day.

Ha! So true. I'd never heard of Hina Matsuri. Neat.

I would like Daniel to win, because he seems the most consistent with his talent, but they seem to be angling for Santino..which could be a fake out. Tim seems so bleh about Daniel's collection, but again..is that a trick? We haven't seen the whole thing. I don't think Chloe will win. It's one of the two guys.

A holiday all about me and I missed it? Figures.