The Oxygen network sure has some interesting home shopping shows...

Late last night, I could not sleep. Pretty much the norm for me these days. Flipping channels I came across "Adventures in Babysitting." It's a fun 80s movie, with an interesting cast - Elizabeth Shue, Penelope Ann Miller, a very young Bradley Whitford as a complete asshat. Even has Clark "Homicide" Johnson in that great role "Black Gang Leader." Yes, a proud moment for a really talented actor. The best part of the film is Vincent D'onofrio as the mechanic Dawson who might also be the mighty Thor. His entire part in the film lasts, maybe, two-three minutes, but he certainly cut quite the stunning figure: 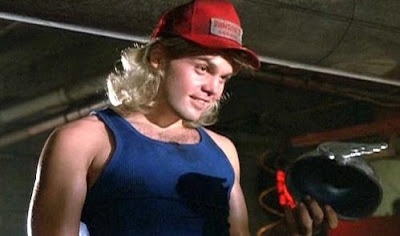 Yes, believe it or not, that blond god is Vincent D'onofrio. 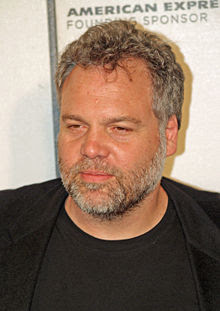 Wow, huh? Don't get me wrong, ah luvs me mah Vincent D'onofrio. It's just a pretty amazing change over time. Of course, Vincent holds the Guiness record for most weight gained by an actor for a film - 80+ lbs for "Full Metal Jacket." Private Pyle is one serious m-f'ing actor, kids.

I fell asleep on the end of the film and woke up to late night home shopping on Oxygen. Yes, "Adventures in Babysitting" was showing on Oxygen. 80s squeaky clean teen movie. Cute and family-friendly.

Not cool, man. Just not cool.

Of course, I watched with great fascination. Actually, I think it's pretty cool that it's a very straightforward show, presented with no titilation. The female hosts could be selling commemorative coins, they were so mellow. They were dressed like normal folks and it was clearly women-friendly. They even had segregated toll free ordering numbers specifically for men and for women. "Ladies," one of the hosts chirped, "When you call your toll-free number, there will be a woman at the end of the line to take your order." I noticed they didn't say anything about the men's toll-free number. I imagine there are women at the end of that line, too.

The strangest thing they showed? Jesus, it actually ooged me out. It's this device called "Aria's Pleaser." I am posting the most tasteful photo of it that I could find. Honestly, a still photo doesn't do this thing justice. It's a pink rubber sheath that looks like the lower half of a human head. It has a nose, a jaw... and a wide open mouth with a battery-operated tongue waving around inside. I stared at it as they turned on the tongue and was horrified. It looked like a birth defect rather than a sex toy. Some stop motion demon straight out of a Wes Craven film. I may actually need therapy.

And, because I'm not going there alone, here's a photo of this sucker (as it were):

Now, just imagine that tongue lolling around and making the whole thing move.

(You can blame my mechanic for this post. If my car had been ready, I was going to drive up to the state fair in Timonium today. Instead, you get creepy sex toys and comparison photos of Vincent D'onofrio.)
Posted by Merujo at 6:42 PM

This post is obviously here to cover up a purchase. Hide in plain sight, yes? ;)

Though personally, I think these toys sound fun...

Heh heh heh - mama needs to pay off the car repairs before she could buy any toys of any sort. :) I'm sure many of these toys are a blast, but would you believe, almost all of them were more than $100? Jeez!

Oh my goodness! That advertorial would have been like a car crash - you don't want to look, but you can't look away...

For the record, I had no idea that there were such thing as MP3 adorned vibrators either. I don't care if that makes me boring or insular!!!!

Nick Cave and the Bad Seeds?

Oh the tacky opportunities are endless!

I think Vincent is a great actor, and I used to watch Law&Order, but I refuse to watch L&O:Criminal Intent on general principle of running a great series into the ground with too many spin-offs. Plus, the premise has always sounded stupid to me.