Damnation, Hellfire, and a Cannibal Update
(I swear I'll stop talking about the people-eatin', really!)

The CompactFlash slot on my computer is kaput. One of the little prongs inside actually broke off when I pulled my card out today. Now, I'm getting a bunch of damn Reddy Kilowatt danger messages telling me that there's a power surge on a hub port. Shite.

I gave the freebie USB card reader I had to someone in need. Now, there will be no more silly photos from me (or photos for my eBay auctions) until I have procured a new card reader.

And now, with no appropriate segue whatsoever...

For those with an interest in the grotesque (all two of you), here's a link to a more detailed story on the Cannibal Family of Rostov. I find it very interesting that Mom-chitsa can't be charged with anything now, since the Russian Criminal Code doesn't mention cannibalism. Apparently, Russia doesn't give a crap about corpse desecration.

Now, don't laugh, but on my Bookshelf of Stuff That I Haven't Looked At Since 1988, I have a copy of the old RSFSR Criminal Code. Back in Ye Olde Pretentious College Days, I did my honors thesis on Soviet Russia's Criminal Code and the treatment of dissident writers. I took the position that, if we in the West accepted the legitimacy of the Soviet Union, which, legally and diplomatically we did, we gave tacit approval to the Soviet constitution, and with it, their criminal code. Therefore, I opined, we had to shut the hell up and stop whining about the treatment of dissidents, since we said the rest of their legal infrastructure was okie-dokie with us. It was a whole "Devil's Advocate" thing - the type of overwrought self-righteousness that only can be produced by a college student. I really didn't think that sending writers into Siberian exile was a good idea. (Even the ones as obnoxious as Solzhenitsyn...) Anyway, I'll have to check and see if the Soviets had anything to say about cooking human parts with potatoes.

Ironically, a theater piece that features episodes of cannibalism is drawing crowds in Moscow. Super-duper! When I found this review, I was surprised to see that I'm acquainted with the woman who translated the play from Georgian into Russian. Maya Mamaladze is a kick-ass translator, and she's a pretty cool person, too. She did some work for me in Tbilisi and it wasn't cheap. (But it was the most beautiful translation of government crap ever seen.)

Cannibalism aside, the theater scene in Russia is pretty rockin'. I miss going out to see new productions all the time. Back in the day, when the ruble was toilet paper and tickets were cheap so workers could enjoy the people's theater (and music and art), you could spend virtually every night of the week at plays, the symphony, you name it... and it might set you back $3 or $4 all told. That was awesome. (Except for that surprisingly nude version of "Iyesus Khristus, Superzvezda" I saw. I really didn't need to see all that nippleage and dingly-dangly-ness during the "So You Are The Christ" number with Herod. Too much pale skin wavin' and floppin' in the breeze.) 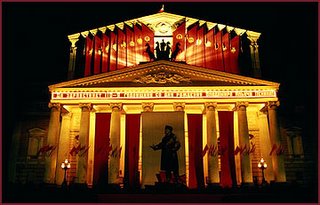 Russian theater rocks, but the Bolshoi is waaaay overrated.
Imagine Broadway being price-accessible to the masses here! How cool would that be?!? (Of course, I also fantasize about theaters and movies without cell phones, but I digress...) Reasonably-priced theater would be a harsh wake-up call for the Nathan Lanes and Matthew Brodericks of the world. But it sure would be sweet for the average joes who need and desire culture and art and pleasure just as much as wealthy Manhattanites. Of course, those with the moolah already would probably just reduce the non-star players' and musicians' wages to sawdust and crap to make up the difference...

Art For The People was one thing the Soviets did well. They screwed up just about everything else they touched (except science, which was astoundingly advanced, but often used for some pretty fucked up purposes.)

Culture for everyone. It was a beautiful thing.

This post made me want to go out for dinner and a show. I haven't had steak in a while... Old Ebbitt, anyone?

Heh heh heh... you're sick and twisted in just the right way. I love it!

I should have titled this post "My Dinner of Andre."

Speaking of Mother Russia, did you see today's news?

Dang...need to remember to "tinyurl" [verb] everything.