Wax on, wax off

Oh lord, my third post in a row about death. I hope this isn't a trend.

Pat Morita, aka Mr. Miyagi and the Colgate Wisdom Tooth, has died at 73.

Back when I worked at the embassy in Moscow, my first job was manning the switchboard. It was an often infuriating, frustrating, and mental-stability-endangering job. My first day I had a fake bomb threat, a fake fire call, a freak who wanted to read me "filthy poems" he'd written about the ambassador, and a guy who wanted to talk about "the price of women in Israel." (The last two dudes would become regular callers.)

In the midst of the non-stop insanity, there would be some really neat moments, like when writers and artists would call in and, instead of keeping them on hold while I hunted down their contacts, we'd chat. I got all sorts of interesting invitations to come to exhibitions and dinners and plays. It was great. I had this big tin in my apartment that I called "The Big Tin o' Numbers" where I stored all the scraps of paper where I'd written down names and numbers of funky people who'd told me to call them sometime. Don't ask me why I did that. I never got any of them transferred to my tiny purple unicorn address book (I'd had it since high school.) And then, when I moved back to the 'States, my tin vanished. Ah well.

Of course, there were unpleasant moments, too, like the time an American citizen died in a skiing accident in Georgia (Soviet Georgia) on a Saturday afternoon. The particularly wussy man who was the embassy duty officer that day told me that he "just couldn't handle that today" and told me to call the man's family back home to let them know. I was 23 and untrained in dealing with grief, consular matters, and repatriation of a body. What an ass that guy was. Hopefully, he's no longer in the Foreign Service.

Or the time that an American vintner - let's call him the Robert the Raging Asshole - called the embassy just before the switchboard was to close on a Saturday afternoon. On Saturdays, only one operator worked, and just my luck, I hit the jackpot with Robert. Robbie Boy had apparently bought a bunch of paintings on his trip to the Soviet Union and had no idea that exporting art required permission from a couple of government ministries. So, he was calling from the airport, wanting the ambassador to make everything okay for him. We had strict rules for bothering the ambassador on weekends, and Robert's art fiasco did not fall into the "emergency call" situation. I did, however, know the rules for exporting art, and I explained the situation. I told Robbie Boy he'd have to leave the art with his Soviet hosts and have them work on getting the exportation paperwork and getting the fees taken care of.

But Robert was having none of this. He was leaving the country, and he wanted his art to go with him NOW. "GET ME THE AMBASSADOR!" When I told him I could not disturb the ambassador (very politely, mind you), he ripped me a new one. I will never forget the classic line from this jerk: "Don't you know who I am? I'm Robert Fucking Mxxxxxi, you bitch! Put me through to the ambassador, he's a friend of mine!" There were some threats about how he'd get me fired. How I'd never work again. How I'd regret this.

I hung up on him at that point.

And he called back.

In the interim, I'd called the ambassador and told him the scoop. The ambo was a good guy. First, he told me, Robert wasn't a friend of his. But, considering how he'd just spoken to me, he'd be glad to speak with him. So, when the call came in, I put it through to the ambo immediately. I watched the the ambassador's phone line stay lit for only a minute or two. It blinked off and the ambassador called me back. Robbie Boy wouldn't be harassing me anymore. And he wouldn't be taking his art home with him on the plane.

Since Robbie Boy called me a bitch, I've never bought any of his wine, and on the handful of occasions when I've been offered a glass of his product at a party, I've turned it down and told the story. I figure, if people are going to support his business, they should know what an egotistical asshat the man is. A couple of years ago, Saturday Night Live did a little sketch about him and a relative who was using the family name to sell his own really disgusting "wine." The sketch was so mean that I had to wonder if the writer had also had a Bad Robert Experience. (That would not surprise me.)

So, why all this in a post about the passing of Pat Morita? Because he was, for a month or so, one of my regular callers in Moscow. 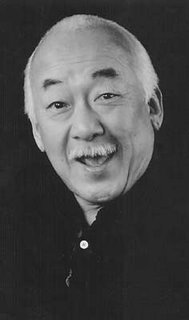 He came to film a movie (although, looking in the IMDB, I can't figure out what it was), and it turned out that one of my favorite embassy officers was a friend of his from California. The first time he called in, he said, "Hi, honey, this is Pat Morita. I'm calling for my friend Ed S. Can you find him for me?" I, of course, being a total geek, couldn't help but say, "Pat Morita - as in Colgate Wisdom Tooth Pat Morita?" And he laughed and laughed. I know some actors - particularly an Oscar-nominated actor - might want to smack you down for bringing up their commercial work, but he loved it. "Yep! That's me! The Colgate Wisdom Tooth! Mr. Miyagi! Arnold! You name it!" And we chatted away for a few minutes while I hunted down Ed.

From then on, whenever he'd call in, he'd greet me by my name and chat with me for a minute or two before I put him through to Ed. He even invited me to join him for dinner with Ed one night, but sadly, he got sick and we had to cancel. I got the warmest feelings about Pat Morita. Just over the phone, he seemed like such a sweetheart - and Ed confirmed for me that Morita was one of the nicest guys ever.

Isn't it weird - I can remember the very last call I took right before he flew home to California. He told me he was sad we didn't actually get to meet. And before I put him through to Ed, he said, "Honey, it's been so nice to hear your voice each time I've called in. You take good care of yourself, okay?" I know it's just a nice thing people say to each other, but his voice was so cheerful and sweet, I can still hear it in my head.

Sounds like Pat really was a sweet guy. You have the best random encounters stories.

I am glad that you got to know him as much as you did. You have a pleasant memory to cherish.

You know what is really freaky?

I posted that exact same photo "in his memory" on another message board today...

Twilight zone moment. Are you starting to get in my head? LOL! :)

From the Reuters article today:

"In a 1994 interview with Reuters to promote 'The Next Karate Kid,' Morita said he had lived a joyful life."

I'm attracted to anyone who says something so spiritual and lovely, and means it. He sounds like a wonderful person.

So I had to run into the bathroom where my wife ( the wine expert of the family ) was contemplating her naval and told her the story about Robert Mxxxxi the wine owner because I was curious as to who he was. It took her one second.
Is there an "on" and a "dav" somewhere between the M and i
Just curious

Good call on the part of your spouse, Gnagtcha. Excellent call, indeed. (If you click on the SNL link, it gives it away, too...)

Just when I think the life experiences you've posted about can't get any cooler, you post something else. Pat Morita seemed like a nice guy --I'm glad he was.