You give me pale shelter

Last night I trekked south on I-95 toward glorious Richmond, Cradle of the Confederacy. Except I stopped well before I reached Virginia's capital - a real snake pit of late, considering the acrimonious gubenatorial election that is now thankfully over. (When Hitler gets mentioned in campaign ads, you know it's bad.) I was bound for Potomac Mills, the outlet mall from hell. That place gives me a migraine even before I ever enter one of its various "neighborhoods." 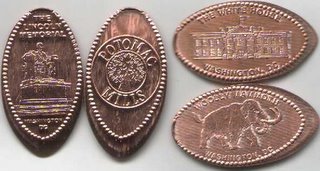 Huh. Apparently they have a penny crusher at Potomac Mills. Shame I missed it. The Sasquatch collects squished pennies. Sorry. Elongated coins. That's the technical term.
I needed shoes - specifically work shoes that don't look like they should be worn by an 85-year-old named Gladys Kravitz. I have funky feet with weird bone structure, and they're jumbo cow feet, to boot. This means that, if a mall has 15 shoe stores, the likelihood that I will find even one pair of office-appropriate shoes to cover my tootsies is, well... NIL. Zilch. Zip. Nada. I've been to countless shoe stores in recent weeks, and I've had no success at all. Yeah, I can mail order shoes, but I hate the thought of having to deal with returns and losing out on shipping costs if the damn things don't fit. It's a pain in the patoot, and I just didn't want to go through that crap this time.

So, I made the trek to the 7th Level of Shopping Hell, the big-ass Virginia outlet mall. Driving there from Maryland requires negotiation of the horrific Springfield Mixing Bowl, the Mother of All Bad Road Work. The Mixing Bowl is an evergrowing boondoggle road improvement project that, since its inception in 1994, has cost nearly $1 billion (it was supposed to be $220 million) and several lives. It's a disaster, and I hate driving through it in good weather and broad daylight. Just my luck tonight - it started pouring rain while I was still on the Beltway, playing "Auto Ballet" with idiots who apparently have no turn signals. By the time I hit the Mixing Bowl, my head was killing me (admittedly, it's been bugging me since the whole Bambi Incident two nights back) and I figured I'd made a colossal mistake in coming out at all.

But I was a woman in need of footwear.

I had a mission. And I would not be deterred. I'm not a great shopper, by the way. I get terrible headaches if I stay in a mall too long. I call it "mall head." I shop like a man. I know what I want, and I like to shop commando raid-style. Surgical Strike Shopping. In, buy, out. Then, go and feed or at least sit in a coffee shop and ponder the successful hunt.

After all the crazy driving with the morons on I-95 South, I am happy to report that Madame Clown Feet successfully procured not only one, but three pairs of shoes suitable for her huge feet - at the only store in Potomac Mills where I've ever found shoes to fit me before. (One of those "brand name discount good luck if you find anything" shops.) Okay, so it was the same pair of shoes, but it came in black, navy, and dark brown, all in a lovely soft leather. And they were on clearance for $29 a pair. Done. Finito. Now let's get the hell out of this consumer nightmare!

Of course, you're probably wondering now, after reading all this crap about shoe-shopping, why the hell I titled this with a line from an old Tears For Fears song. I figure if you'd read in this far, you deserve some explanation. In my car, the Crapmobile, I have several boxes of audio cassettes. Most of them are pretty old - some of them bootlegs I picked up in Thailand a gazillion years ago (someone tell me why I bought a 10-baht bootleg of "Johnny Hates Jazz"?) and some of them mix tapes I've made or been given over the years.

Until last night, I still had a tape called "John's Music" that was made for me by a guy I had a very bad crush on my first year in college. As usual (and as happened with every guy I liked in college), he only wanted me as the "fat girl buddy." (Continuing story of my life.) I thought he was really, really hot. Turns out, he was actually just really, really crazy. Bullet dodged. Although, back then, I was traumatized that he didn't want me, especially when a fun evening in my dorm room turned into him making out with my next door neighbor. Which, in turn, led to my introduction to drinking screwdrivers, courtesy of a more worldly (and inebriated) chick down the hall. Aaaand, eventually, led to me worshipping the porcelain god for the first alcohol-induced time in my life. (I was a late bloomer. In fact, I'm still waiting to really bloom.)

But, before all the mess, John made me a tape of his favorite music. Remember, this was 1985, so there's a lot of cheesy new wave and really bad goth stuff on this tape. In a random tape grab the other day, I popped that one in, and I found that most of John's favorite music sucked. His teenage tastes have not stood the test of time, unless you are an aging Circe Nightshade or Azrael Abyss, Prince of Sorrow, and you're still working at Cinnabun... 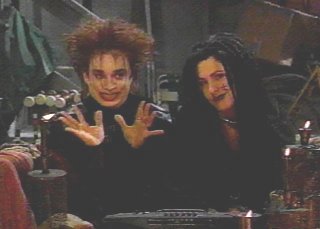 I think John may have had that hair at one point.
No. Wait. Now, I'm just being mean.

Lord knows, there's a pile of brilliant new wave stuff from that year and some excellent goth-y stuff, too. John just didn't find it. He found and embraced crap. So, reaching around for any old tape in the dark last night, I ended up grabbing "John's Music" again. I didn't know what I'd gotten until the first horrid tune started up. Ugh. How is it that the Berlin Wall had fallen and the Soviet Union collapsed, but this piece of shit still existed? And why in god's name had I not destroyed it in some sort of ritual years ago?

So, there I was last night, cruising up 95 in the Crapmobile, listening to StinkFest 1985 in the rain. I think there was a measure of divine intervention at work, for somewhere into the third awful song, the tape committed hari kari. I heard some sort of unpleasant warbling sound that wasn't pouring out of a poor man's Siouxsie and with that, the tape ejected, drooling two decades of horribly abused magnetic tape all over my cup holder.

And thus, the era of John, college non-boyfriend Numero Uno, came to an official end, twenty years later than it should have. Not with a bang, but a warped whimper.

So I reached into the tape pile again, hoping for a better outcome. This time, I was successful - I had retrieved "Moscow Mix #1." When I first arrived in Moscow in 1989, one of the first things I did was to make a mix tape to commemorate the beginning of this weird adventure. I had a first generation CD player and a banged up Teac dual tape deck. (I still have it. It looks like someone took a sledgehammer to it, yet it's still up on top of my stereo cabinet.) I didn't have a lot of music back then, but what I had, I still like now, and I'm glad this tape hasn't bitten the dust.

In the darkness and rain last night, I heard Natalie Merchant sing "Like The Weather" and Sting go on about "An Englishman In New York." I felt my headache fading away, and I thought back on that time - uncertain about the future, but ready for just about anything. I rolled down my window and put my left hand out, loving the feeling of the cold rain on my skin. As I was pulling up to my apartment, Tears For Fears pounded out of my speakers.

My cell phone rang. It was a friend calling to say that he wouldn't be around for Thanksgiving, after all. Was that okay? Of course it was. I was delighted he would be traveling to see a friend he hadn't seen in years. Pretty excellent deal. I don't control my friends' social agendas, I said. Thanksgiving alone would be okay. Of course, I laughed, I'd just written a radio commentary on Thanksgiving, and how much I loved it, and how it didn't matter where you were or what you ate, as long as you were with people you cherished. How ironic.

Stupidly, I was suddenly depressed. I was really happy that my friend would be spending the holiday with a good friend, long unseen. How could I not be? I was quietly envious that he had enough money to buy an airline ticket this close to the holiday, I'm ashamed to say. But, more than envious, I was again faced with the realization that I was on my own again. And I was tremendously, lamely sad.

I ejected the cassette and turned off the engine. I was cold. My left hand looked chapped from hanging out the window in the rain.

Weird, isn't it, that three minutes on the phone can change your mood from bright to dark? I wish I wasn't that fragile. I get excited over dumb things that really don't mean that much to other people. And then I get crushed when meaningless things are discarded. It's a childlike, perhaps childish, response. I really wish I could be stronger.

Fragile people don't spend time living in foreign countries -- especially cold ones. Fragile people don't land fantabulous jobs at respected media outlets -- they only hire the hardy over there. Sensitivity is simply the other side of the creative coin. You're in good company.