The Edmund Fitzgerald (30 years on) 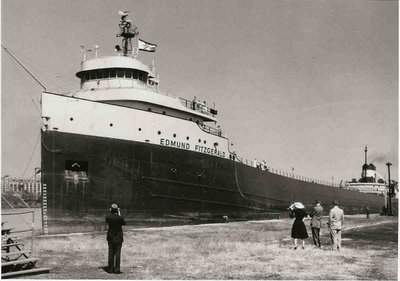 Pirate Twin commented on my entry about ballads that today marks 30 years since the Edmund Fitzgerald sank in terrible weather on Lake Superior. 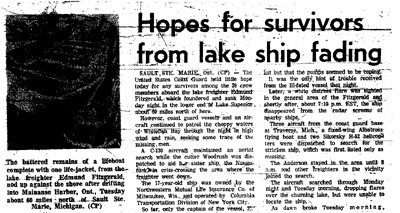 In reading this CNN.com story about the wreck and the Gordon Lightfoot song, I was amazed by this figure: 6,000 ships have disappeared in the Great Lakes.

It's hard to imagine 6,000 ships scattered at the bottom of the Great Lakes - and with them, the remains of many crew members, surely. A ghost fleet, silent and dark, moored at lake bottom.

I spent an entire day at a museum in Minnesota once, there on the shores of Lake Superior...

A museum dedicated to all of those ill-fated ships lost out upon the deep waters.

I still choke up when I think about the "Edmund Fitzgerald" and her lost crew, forever memorialized in the sad lyrics of Gordon Lightfoot's song of tribute.

Sorry so lengthy, but here is good information about the Edmund Fitzgerald. It's fascinating reading, isn't it? RIP

---
On November 10, 1975, the SS Edmund Fitzgerald sank into the waters of Lake Superior. The ballad "The Wreck of the Edmund Fitzgerald," sung by Gordon Lightfoot, was a well-deserved tribute to the 29 men who died that day. Although the words of the song seem to indicate that the captain and crew knew they were doomed, it is now believed the sinking of the Fitzgerald was so rapid that the men did not know the full seriousness of their plight. No attempts were made to leave the ship by lifeboat. No distress signals were ever issued.

The "Marine Casualty Report" issued by the Coast Guard Board of Investigation suggests that the Fitzgerald had taken on water due to earlier damage from the storm. When she plunged headfirst into a large wave, she sank. There was no time to make a final distress call or attempt life-saving operations.

So what caused the Edmund Fitzgerald to sink? One documentary on the Discovery Channel said it was likely that "complacency" took her down. In the tradition of the Titanic -- she was believed to be unsinkable.

7 June 1958, the Edmund Fitzgerald is launched on the River Rouge from the Great Lakes Engineering Works (GLEW). The Fitzgerald becomes the largest ship to sail the Great Lakes, a title she will hold for eleven years.

In 1969, the Minimum required freeboard is reduced by the American Board of Shipping (ABS).

On 6 September 1969, the Edmund Fitzgerald ran aground near the Soo Locks, resulting in considerable internal and external damage.

1969-70 Winter layup: Additional vertical stiffening is added to her keelsons to correct a cracking problem.

1971: Freeboard is again reduced by ABS.

1973 Freeboard is again reduced by ABS. The Fitzgerald can now legally carry enough cargo to sit 3 feet 3 1/4 inches lower in the water than was considered safe when she was launched.

1973-74 Winter layup: The cracking problem has reoccurred, corrected by welding.

7 Jan 1974, Detroit River: About one mile west of Belle Isle, the Fitzgerald loses her bow anchor.

31 October 1975, Toledo, Ohio: The Coast Guard inspects the Fitzgerald. Lt. William R. Paul of the Coast Guard Marine Safety Office notes the problems on Form CG 835. She is found to have damaged hatch coverings on three of her hatches. The ship will not be permitted to sail next spring unless repairs are made. However, she is allowed to continue sailing without repairs for the remainder of the shipping season.

4 November 1975: The Coast Guard writes Oglebay Norton a letter, informing them of the damaged hatches. The Fitzgerald is considered seaworthy to face the November weather but must have the repairs made before spring.


9 November 1975, 8:30 AM, Superior, Wisconsin: The Edmund Fitzgerald begins loading a cargo of taconite (iron ore pellets) at the Burlington Northern Railroad Dock No. 1. She is scheduled to take them to a steel maker on Zug Island in the Detroit River. She is still chartered to Oglebay Norton of Cleveland. (This is certainly the source of the incorrect lyric "When she left fully loaded for Cleveland.")

2:20 PM: The Fitzgerald leaves Superior with a cargo of 26,116 long tons of taconite. ("Twenty-six thousand tons more than the good ship weighed empty.")

2:39 PM: The weather service posts gale warnings. On the Anderson, Captain Cooper radios to a freighter he sees behind him. "W4805, Arthur M. Anderson to the vessel northbound abeam Knife River. Do you read me?"
"Anderson, this is the Edmund Fitzgerald. Over."
"This is the Anderson. Have you picked up the gale warnings the Weather Service just posted? Over."
"This is the Fitzgerald, ah, roger."
"I'm thinking I will take the northern track; get over to the north shore for shelter in case it really starts to blow. Over."
"I've been thinking the same thing. I'm steering sixty-five degrees for Isle Royale."


2:00 AM
At some point early in the morning, the Fitzgerald overtakes the Anderson.


1:00 PM
Weather report from the Anderson. Her position is 20 miles northwest of Michipicoten Island, winds from 150 at 20 knots, waves of 12 feet.

Weather report from the M/V Simcoe. The Simcoe is only 15 miles away and reports winds from 270 at 44 knots, with waves of 7 feet.

No weather report is received from the Fitzgerald. Her estimated position is 11 miles northwest of Michipicoten Island.


1:40 PM
Radio traffic between the masters of the Anderson and the Fitzgerald.

Captain Cooper states "I'm going to haul to the west for a while."
Captain McSorley replies "Well, I am rolling some, but I think I'll hold the course until I'm ready to turn for Caribou."


1:50 PM
Log of the Anderson
Winds NW by N at 5 knots, north of Michipicoten.


2:45 PM
Log of the Anderson
West of Michipicoten, winds from the NW at 42 knots.

"Look at this, Morgan. That's the Fitzgerald; he's in close to that six fathom spot." Morgan replies "He sure looks like he's in the shoal area."
"He sure does. He's in too close. He's closer than I'd want this ship to be."

3:20 PM
Log of the Anderson
South of Michipicoten, winds from the NW at 43 knots.


3:30 PM
Radio Transmision from Captain McSorley on the Fitzgerald to
Captain Cooper

"Anderson, this is the Fitzgerald. I have sustained some topside damage. I have a fence rail laid down, two vents lost or damaged, and a list. I'm checking down. Will you stay by me til I get to Whitefish?"
"Charlie on that Fitzgerald. Do you have your pumps going?"
"Yes, both of them."


4:10 PM
The Fitzgerald has two radar sets but both use a common antenna. The Fitzgerald calls on the radio to the Arthur M. Anderson.

"Anderson, this is the Fitzgerald. I have lost both radars. Can you provide me with radar plots till we reach Whitefish Bay?"
"Charlie on that, Fitzgerald. We'll keep you advised of your position."


Time Unknown
Whitefish Bay
The upbound saltwater vessel Avafors is piloted is a retired laker, Captain Cedric Woodard. Woodard advises the Captain of the Avafors not to leave the shelter of Whitefish Bay. The saltwater captain gives his reply.

"Gran Marais. This is the Fitzgerald. Is the Whitefish Point radio beacon operative?"
"Stand by. We don't have the equipment here to tell if it is operating properly. I will call you back."

Wigen uses the teletype to query Sault Sainte Marie. The Soo tells him that their monitoring equipment show the beacon and light are out. He makes contact with the Fitzgerald.

"Fitzgerald. We've had a power failure. Both the Whitefish beacon and light are inoperative."
"Okay, thanks. We were just wondering, because we hadn't been able to get it for a while."

Wigen would later testify "Everybody sounded like they were in real good spirits."


Between 4:30 - 5:00 PM
The Fitzgerald calls on the radio for "any vessel in the vicinity of Whitefish Point" for information on the status of the Whitefish beacon and light. They are answered by the pilot, Woodard, on the upbound saltwater vessel Avafors. Woodard knew McSorley but didn't recognize the voice.

"Who am I speaking to?"
"This is Captain McSorley."
"I didn't recognize your voice."

Woodard informs McSorley the neither the beacon nor the light are operative.


Just after 5:00 PM
The Fitzgerald radios the Anderson again, asking for a position.


probably between 5:30 - 6:00 PM
Captain Cedric on the Avafors radios the Fitzgerald.

"Fitzgerald, this is the Avafors. I have the Whitefish light now but still am receiving no beacon. Over."
"I'm very glad to hear it."
"The wind is really howling down here. What are the conditions where you are?"
[shouted on the bridge of the Fitz, heard by the Avafors] "DON'T LET NOBODY ON DECK!" [unintelligible] "vents"
"What's that, Fitzgerald? Unclear. Over."
"I have a bad list, lost both radars. And am taking heavy seas over the deck. One of the worst seas I've ever been in."
"If I'm correct, you have two radars."
"They're both gone."

"What course are you steering? You are widening out a little to the left of our heading marker."
"We are steering 141."

It was the same course the Anderson was holding. Clark was puzzled
why the Fitzgerald was pulling to the left.


Sometime before 7:00 PM
The Anderson is struck by two huge waves that put green water on the pilot house, 35 feet above the water line. The waves hit with enough force to push the starboard lifeboat down on its saddles, damaging the bottom.

No weather report is received from the Fitzgerald.

"I am picking up the highland at Crisp Point. We're twenty-five miles from it, and you are ten miles ahead; you are fifteen miles from Crips Point.

7:10 PM The Anderson is still following the Fitzgerald, now at a distance of about 10 miles. Captain Cooper is momentarily off the bridge. The first mate of the Anderson radios Captain McSorley on the Fitzgerald to inform him of an upbound vessel. "Fitzgerald, this is the Anderson. Have you checked down?" "Yes we have." "Fitzgerald, we are about 10 miles behind you, and gaining about 1 1/2 miles per hour. Fitzgerald, there is a target 19 miles ahead of us. So the target would be 9 miles on ahead of you." "Well, am I going to clear?" "Yes. He is going to pass to the west of you" "Well, fine." "By the way, Fitzgerald, how are you making out with your problem?" "We are holding our own." "Okay, fine. I'll be talking to you later."

Morgan Clark is wrong. The Fitzgerald has made its last radio transmission.

"We are holding our own."

Thanks, PT, for that account. And VO, I still get massive goosebumps whenever I hear the song. I always will, I reckon.