A call from Jerusalem

My day was brightened considerably by friends calling me for Christmas/first day of Hanukkah from Jerusalem. Never been called from Israel before. That kinda rocks. :-)

I'm kinda hoping my friends encounter one of those delusional people suffering from "Jerusalem Syndrome." That would make for a helluva good holiday story. I saw a news report on these folks once - there was an American tourist who, upon reaching Jerusalem, suddenly believed he was Joshua. He got himself a horn and has been trying to blow down the walls of Jericho (probably actually just some mini-mart or an apartment building in Jerusalem) ever since.

Of course, I felt the same way when I reached Wall Drug in South Dakota on a family pilgrimage many years ago. I suddenly thought I was a jackalope. 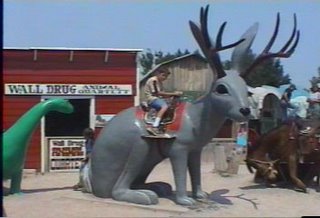 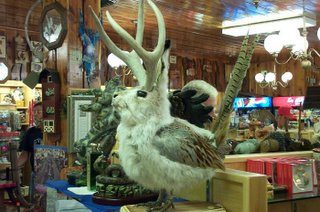 Also at Wall Drug. I don't know what the hell it is.
(Other than scary.)
Posted by Merujo at 1:29 PM

Been there and done that, more than once... Ouch.