I saw the new Harry Potter movie on Monday night. I just had this hankering at work that afternoon, so I headed up the Pike to the Rockville Regal 13, wisely avoiding the Hell Traffic on 270. The parking lot was a wasteland thanks to the dusting of snow that freaked most people into Donner Party mode, which made me very happy - I love going to movies in nearly empty theaters. No cell phones, no yapping VCR-at-home-raised fools. It's marvelous. I stopped at the Potbelly Sandwich place next door - they do a deal - dinner and a movie for $11 ($3.99 for the sandwich and $6 for the movie ticket, which is a screaming deal in the evening.) The sign in the window said that the movie ticket was seven bucks, but, for sure, they only charged me six. I'm not complaining.

I ate my "Wreck" (damn tasty sandwich, but the Sasquatch is right - Potbelly is stingy with their pickles) and headed next door to Regal. It truly was like a ghost town. Excellent! Downstairs, five bored teens stood like zombies behind the refreshment counter. There was no one to serve and nothing to do. One girl told me she was really sick and wanted to go home. I asked someone else to pour my drink. (Yum! Nothing says tasty and wholesome like a sick kid handing out your snacks!)

I got pissed off though when I got to Theater 7, as there was a sign on the door saying that the heat was broken - if I wanted my money back, I could return to the box office.

Okay, this is simply UNCOOL. If you have a movie running in a theater with no heat and it's 25 degrees outside, you have a responsibility to let people know BEFORE they buy their tickets. This is not the first time this has happened at the Rockville Regal. I sat through one of the Lord of the Rings movies with mittens on my hands and a scarf wrapped around my head. The conspiracy theorist in me thinks that this is simply Regal's way of saving money on their heating bills. Whatever the reason, it stinks. Hey, Regal peeps! Fix your friggin' heat!!

Still, I stayed. I wanted to see Harry Potter. Fortunately, I only started to feel the cold in the last half hour, so it wasn't a horrible experience. There were only five other people in the theater, and I think they were: 1)as appreciative as I was of a quiet, nearly empty theater, and 2)pissed off about the heat thing.

All in all, the movie wasn't bad. It wasn't great, either. It was a wee bit too long, and it didn't have the character of the previous film. (If you want to read a good post that takes on Irritating Things About This Movie, visit Javier's LiveJournal. Fan of Harry Potter though I am, I agree with him on the stuff that drives him crazy.)

So, where does all this lead? To this one thing, my friends. When Ralph Fiennes finally appears on the scene as Voldemort, I felt like I'd seen him done up like this before.

For the Voldemort makeup job reminded me oh so much of the English Patient, post-burns. Shame on me, but that's what I kept thinking. "Oh, Ralph Fiennes is in his burn patient gear again..." Well, in truth, I guess it's more like "the English Patient meets Nosferatu." But close enough. I have to wonder if Fiennes or the makeup artist thought about that... 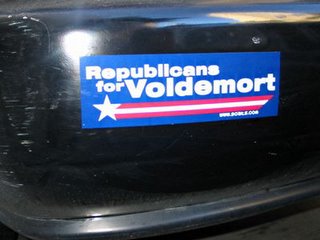 The original Death Eaters
"Narnia" is out this weekend. I so hope it rocks. I'm hearing mixed reviews of "King Kong." I've never been a fan of Kong, so I'm not particularly excited about that one. "Narnia" rings my bells, though, as I read the books again and again as a kid. Anyone else remember the BBC TV version a million years ago?

Here's hoping for something good!
Posted by Merujo at 12:18 AM

Aha! Yes, BBC tv. I knew I had visual memories of it from somewhere but just couldn't dredge up where.

Sucks about the no-heat. When I lived in FL, there was a theater that sometimes leaked in heavy rain. One of my co-workers was there when a ceiling tile fell- didn't hit anyone, but still... They didn't close that screen or repair the ceiling. Damn cheapskates.

I saw Harry Potter a couple weeks ago. I did appreciate the added humor in this one...good stuff.

Me and the hubby are more "Kong" people than "NArnia" people, so we'll go se Kong, you go see Narnia, and we'll compare notes. Sounds like a plan! :)

I like going to empty theaters. When I was going through some stuff at my last job and was really stressed and depressed, I'd spend evenings at movies, just to lose myself in the stories and escape (what an expensive time THAT was.) The less people, the better