Temperatures here in the DC area have finally plummeted to what I describe as "Chilly Willy Weather." (I'm referring to the cartoon penguin, by the way, so keep that mind above the belt there, mister!) I have hauled out the winter coats and $1 stretchy gloves (never buy me nice ones - I will lose them), and I have my slip-on shoe spikes, de-icer, and the cool ice scraper (with built-in mitten cover!) by the door. 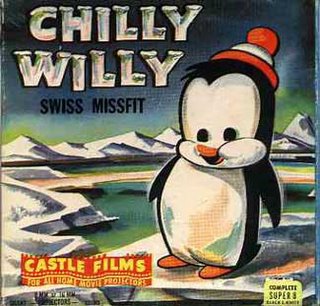 For, you see, tonight comes our first round of "wintry mix." Wintry mix is something that, if it happened back in the Midwest, would be greeted with barely a shrug. Feh, cold is cold. And snow, ice, sludge, angel snot, whatever - it's all just to be expected. People still go to work and school. Commerce and government do not grind to a halt. The world continues on it's petty pace.

This image reminds me of a particularly tasteless joke about a penguin, car repair, and the gluttonous consumption of ice cream. I'll spare you the joke, but the punchline is: Mechanic: Looks like you've blown a seal. Penguin: Oh, no, no! It's just vanilla ice cream!
Here, however, in "We Can't Handle Weather Central," chaos reigns supreme when wintry mix comes to town. I didn't go to the grocery store today, but I'm sure there were people stocking up as if they were expecting to be the next Donner Party. Bread, milk, and toilet paper flies off the shelves anytime snow is predicted here. It's so legendary that the Maryland Lottery actually came up with a snarky scratch-off ticket where you had match milk, bread, and toilet paper for a cash win. I think it may have been called the "Christ, We're A Bunch of Panicky Pansy-Ass Weather Wimps!" scratcher.

Then again, I may be wrong on that one... 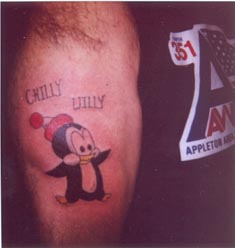 This actually came from a "Chilly Willy" tattoo website. I shit you not. I'm not even going to guess what Chilly Willy might represent in prison tattoos...
According to Weather.com, we'll have snow and sleet tonight, turning to rain by Sunday morning. Fine and dandy except for the fact that the temps are in the low 30s, which means icy crap all over and motorists who don't know how to drive in winter conditions. I was going to go see Harry Potter tomorrow morning, but I think I'll be sleeping in and watching one of the 4 time travel movies I got from Netflix instead. Ah well.

Two inches of snow can utterly debilitate the federal government. Not that I'm opposed to a day off or a morning to snooze and watch all the "Judge shows," but the closures are sometimes laughable. My employers follow the federal guidelines, so I have to watch the news carefully to see if we have: 1)outright closures, 2)delayed openings, 3)unscheduled or liberal leave, or 4)we're open regular hours - good luck fighting with the other commuters in getting here on time! Yeehaw!

Local school systems seem to close here now if one flake hits the ground and sticks. It's fairly ridiculous most times, and I feel for the kids who have the most screwed up learning atmospheres anyway, between spilled mercury, football game shootings/stabbings/beatings, and the occasional teacher with a bad, bad secret or administrator snarfing all the petty - and not-so-petty - cash. Parents must want to pull their hair out - sometimes the DC schools don't decide to close until after many parents have dropped kids off. It's a mess.

So, here we are, Snow Miser. Bring it on. It's time for another dysfunctional winter in Our Nation's Capital. 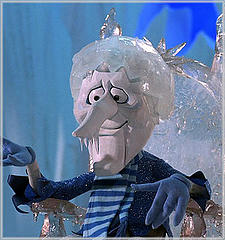 
Dammit. I'm out of bread and toilet paper.
Posted by Merujo at 4:43 PM

I hate winter. (I may have mentioned that before.) It's not the snow so much as the cold, gray 25-degree or lower days. I think I should have been born a bear. Spend 6 or 7 months eating, the rest of the time sleeping, mauling an occasional hunter just for fun.

You just made me laugh so hard, I had a coughing fit. I hate the cold, gray days, too. I'm finding I can't tolerate the cold like I used to. I can't keep warm at night. Ugh.

LA has the same issues but with rain. People just don't know how to drive in it which is ridiculous.

As for snow, the ground is covered again here, and I'm starting to bemoan the fact I bought my car in CA so it doesn't have a rear defroster.

hey, my WV is the call letters from my college radio station.