We all knew his face. Those long features, the hangdog expression and eyes that weary the viewer with their dramatic droopy bags. He was a great character actor, with a tremendous number of credits to his name.

Geek Girl here will remember him as the creepy spirit in the subway in "Ghost" and, god help me, as John O'Connor in "Buckaroo Banzai." But his pedigree was much more significant than that. And now he's gone. Vincent Schiavelli died of lung cancer today at his home in Sicily. He was only 57. 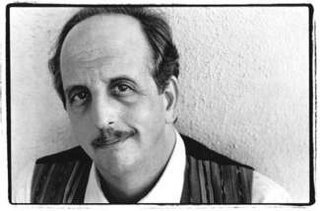 Back in June 1994, I was working for Goodwill Industries (managing international programs for their corporate office in DC.) That year, Goodwill's annual international conference was being held in Beverly Hills. I will never forget it because the night before my flight to L.A. was the infamous and idiotic O.J. Bronco chase. I was supposed to be at a Penn & Teller gig at Wolf Trap that night, with the Sasquatch. But he had been dispatched to Tanzania for work and I was trapped at my office so late, I could not make it to the show. Instead, I packed my bags for Los Angeles, watching half that city lining the freeway to cheer and jeer a murderer. Surreal.

The next morning, on the bus that connects the main terminal at Dulles to the mid-field gates, I met Penn Jillette, in all his enormous black leather-clad glory. He was gracious and polite, even shaking the hand of My Crazy-Ass BossTM with his giant hand, completely ringed with silver skulls on each finger. I told him I was disappointed I had missed the show. He promised that they'd be back at Wolf Trap - they enjoyed the venue. And I told him about the weirdness of watching OJ Simpson's slow drive to nowhere. Our conversation ended when we hit the mid-field terminal. I still marvel at just how tall and big that guy was - and so very kind to a total stranger.

Arriving in Los Angeles (after a flight, where, blissfully, I was several rows away from My Crazy-Ass BossTM), I ended up in a cab with our lawyer and Goodwill's vice president. Our cabbie kept turning around to look at me, which freaked me out, until I learned the cause. He was an Armenian emigre, and I had handed him his immigration paperwork in Moscow a couple of years before. He remembered my name and reached back, grabbing and kissing my hand - all while driving at an excessive rate of speed on a busy freeway. This served to freak out my colleagues, who could not believe that, of all the cabs at LAX, we'd get into one driven by a guy I'd met in Russia. ("Welcome to the weirdness that is my life" is all I could say.) The cabbie offered to drive us past the "OJ Murder House", but we passed.

We checked in at the Beverly Hilton, the site of our conference, and I ditched the rest of the staff as quickly as possible. I had that day to just chill before the work started, and I'd never been to Los Angeles - let alone Beverly Hills - before. I stopped to get a cup of coffee in the hotel's lobby bar and plot out my free day. Nursing my overpriced coffee, I saw a tall man in a fedora and tan linen suit sit down at the next table. When he tipped his head back, I saw it was Vincent Schiavelli. But, damned if I couldn't recall his name just then. The wheels kept spinning in my head, but I was lost. His characters reeled around in my brain, but I simply couldn't dredge up the name. Blast!

In my ridiculous effort to remember, I must have been staring at him. He smiled and tipped his hat to me. "Beautiful day, isn't it?" he said.

"Absolutely gorgeous," I replied. "I feel a little bad, sitting inside, drinking coffee on a day like today."

He laughed and said, "You should never feel bad about stopping for coffee. As long as it's good coffee. And you still have plenty of time to go out and enjoy the day."

I smiled, and with that, our conversation ended. A woman arrived and greeted him, and I could not help but overhear their words. He'd written a cookbook - a Sicilian cookbook - and she was interviewing him for a cooking magazine. He would speak quietly one minute and then raise his large hands and widen his eyes, talking animatedly the next. Interviewing a good character actor must be a helluva lot of fun, I thought.

I finished my coffee - I'd nursed that cup as much as I could. Considering the price, I felt that lingering over it was almost a necessity. I signed off on my room charge and stood up to go. In the middle of his interview, Schiavelli stopped to tip his hat to me again and say, "Now, go out and enjoy that day!"

How sweet was that? He could have asked me why the hell I was staring at him. He could have just ignored me, but he didn't. It's in the little details, in the tiny, insignificant encounters where character shines through.

John O'Connor has returned to Planet 10. And this Monkey Girl says farewell.

Rest well, Vincent. Hope it's pretty cool where you are.

I saw that he died, but didn't recognize the name. Now seeing his picture, I too am recalling his many movies.

I met Tiny Tim on an airplane once. Not the same thing. Next time I'm in DC, coffee's on me -- i want to hear more of your stories!

I just read about it and came directly here, hoping to share the loss with someone.

I am thankful that you had your unique connection, however brief, with this fine actor. I will miss him.

They are all leaving us too early, Merujo.

damn girl, you really do have the best stories.

i have to admit, while i loved his work, he did creep me out a little bit. nice to know he was such a lovely person in person.

It's weird - I only recall most of these stories and encounters when, sadly, someone passes away. I hope this isn't some sort of trend. Maybe I'm a lower-level celebrity death magnet.

Larry Hagman - take care of your current liver! I don't want to have to haul out the "Easter with Hung-over JR" story yet!!

Well, that was sick. That's just another dollar toward my Amtrak ticket to Hell...

You've written a wonderful tribute. He sounds like a man with old world manners and values.

What a beautiful euology. You should write for a living ;)

I have to think a great character actor experiences the "stare" all the time. It has to their version of receiving an Oscar.