I forgot something else...

For I am a bonehead.

This week, two of my friends turn 40: the Atomic Editor and Gonzomantis. The good Mr. Editor and I met our first day of classes at Macalester College. We were both taking Elementary Russian I, taught by the Kinky Finn.

The Atomic Editor is a genius, and I don't say that lightly. He's the finest type of intellectual - one who can, with true authority, explain the mess that is Middle East one minute and quote Buffy the Vampire Slayer and Aqua Teen Hunger Force the next. We need more talking heads like this on CNN, thank you very much. The Editor has, on occasion been called in for TV and radio interviews to discuss his areas of expertise. He makes a point of NOT informing the Sasquatch or me of these events in advance. He's afraid we will call in and make his life difficult (which, of course, we would, but god, it would be so much fun!)

The Sasquatch and I got to see the Atomic Editor and his Atomic Spouse this weekend when they did a swing through DC. We ate barbecue until we almost exploded and we gave the Editor his birthday gift of vintage sci-fi magazines. It was a pretty damn good evening.

The Editor's birthday was yesterday. I hope he had a very good one, indeed.

Gonzomantis, on the other hand, has a couple of days yet before he becomes old and decrepit like the Editor and I already are. The G Man has been friends with the Sasquatch since dinosaurs ruled the earth. (More or less.) They were friends back in Nebraska, and then roommates at Macalester. I met the Sasquatch and Gonzomantis at the beginning of my sophomore year. They lived next door to one of my freshman year friends. Eventually, my treks to see that friend became a good excuse to visit the gentlemen down the hall. Gonzomantis was the first person I ever knew who had a CD player. I thought he was a god. Between the G Man and the Sasquatch, my musical tastes were dramatically expanded. (The Sasquatch made me tapes of a whole lotta music that year. I still have most of them, labeled in the Squatch's distinctive hand.)

Now, Gonzomantis is a respectable family man in Minnesnowta, with a lovely spouse and two cute kidlets. Every once in a while, he comes out here to DC to harass the Sasquatch, and I get to join in poking the bigfoot. It's fun. One night, when the G Man was visiting the Sasquatch several years ago, we ended up at the we-only-hire-Ralph-Lauren-models-for-waitstaff White Flint branch of the Cheesecake Factory. I have no recollection of why, but Gonzomantis and I started laughing over something, and it became one of those uncontrollable, laugh-until-tears-stream-down-your-face moments. God, I wish I remembered what was so funny. I love laughing like that - it's incredibly liberating and feels so good.

I don't get to see Gonzomantis very often - the last time I encountered him was at the Atomic Couple's wedding last October. He is, and I say this with all seriousness, a good man. He's smart, funny, handsome, and just a decent guy. I wish him a great birthday on the 12th - I hope it's a day spent having fun with his family and friends. Have a good one, Gonzo!

So, gentlemen, this is for you: 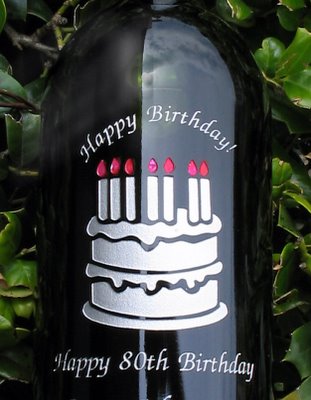 
Okay, so my math may be a little off there. The thought's still the same. Happy birthday, guys! Big hugs to you both.
Posted by Merujo at 11:05 PM