(Just a side note, re: Oscar noms)

This morning, E! messed up and kept running a screen showing that Charlize Theron had been nominated in the best actress category for her performance in (you'll love this) "Aeon Flux" rather than the Silkwood-esque "North Country." I wonder if an intern is now interning elsewhere...

And, forgive me, but, William Hurt got nominated for his awful, awful over the top performance in "A History of Violence"? Puh-leeze! He wasn't just chewing on the scenery, he was devouring it whole! I sincerely was embarrassed for him. I know that "Violence" is based on a graphic novel, but, jeez, Hurt was way over the top. (And his facial hair was awful, too.) Note to Mr. Hurt: go rent Road to Perdition and see how graphic novel baddies translate beautifully to the big screen. 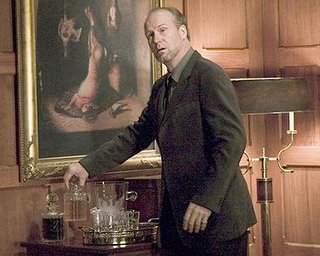 Ah well. Perhaps it's just me. Very simply, either I have no taste, or the members of the academy were smoking crack when they cast those ballots.

Maybe they got their ballots from Florida.

(Yeah, nothing like a really old election joke to show my finger's right on the pulse of the American psyche!)

I wonder if that job "had" good benefits.

What's it like to mess up on National Television?

I saw Richard Hurt in Richard III at the Manitoba Theatre Centre a couple years ago and I thought he was wretched in it. He gobbled up that scenery like it was a bucket of marshmallow fluff. I thought the production was actually not that bad -it was different = but I was NOT impressed by him. His voice sucked too-not great for the stage.

I have a friend who worked as an intern at a popular radio station. One day she was supposed to run the emergency broadcast test. Only she accidentally put in the tape for an actual emergency. It was a short radio career.

I rarely agree with the oscar nominations. Last year's Sideways was one of the most depressing and boring film I've ever watched, yet it won awards. What are they thinking?

I've never been impressed by William Hurt. I loathed him and his awful accent in "Gorky Park" and it's been downhill since then. I guess he's just not my kind of actor.

And I'm glad I'm not the only one who didn't dig "Sideways"! I found it incredibly depressing, too. A drunk who steals from his mother and a guy who is getting married to someone because she's basically his last hope, yet he's still gettin' it on with a total stranger two days before the wedding. Sad.

(Maybe I wasn't sophisticated enough to appreciate it...)