Nobody Walks in LA

I'm thinking ahead to Los Angeles...

I'm going to assume that the rental car we'll pick up at the airport in Long Beach will have a CD player in it. (I'm hoping it will.) I think this upcoming trek deserves a good, upbeat soundtrack, and I'm soliciting tracks from y'all to include on a mix for driving around Los Angeles.

If you have some suggestions for good urban, SoCal drivin' tuneage, let me know.

I'm excited - our little hotel/motel/place to sleep is right next to the crazy stripmall Uzbek restaurant at Sunset and La Brea! (Across the street from Charlie Chaplin's original studio, that became A&M Records, and is now Henson Productions.) Who wants to meet up for Uzbek lunch?!? (Yeah, I'm an idiot - I'm excited about Central Asian food in California. So sue me.) 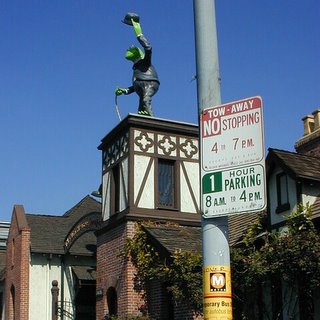 Check it out - a cool Muppet homage to Charlie Chaplin. Neat, huh?
(But do they have a Muppet dressed up as Herb Alpert, too?)


Sasquatch, Gonzomantis? We are gonna have a helluva 48 hours! (If only we weren't going to miss Michael Penn at Largo by two dang days. Alas!)
Posted by Merujo at 10:59 PM

Man. I have NEVER been to California. Ever. Except for a 45 minute layover in LAX, but I don't think that counts.

Eh, I think I'll survive.
Have fun on your trip! Sounds muy bueno :)

LA is a lot of fun to visit. I don't know if I could live there, though. This will be a whirlwind cross-country trip, but it should be a hoot!

Randy Newman screaming at the top of his lung's, "I Love L.A." Enya singing "On Your Shore," since they use that predominantly in L.A. Story, the movie. Tim Buckley singing "Welcome to L.A." The Doors singing "L.A. Woman." Some Santana for that East L.A. thang. "Low Rider" by War. Ditto. All of Joni Mitchell's "Hissing of Summer Lawns." Mama's and Papa's "California Dreaming". "Black Tambourine," by Beck...just because. ;)

Uh, isn't that place across the street a strip joint? Oh, right that's a block away!

Across the street at 1525 N La Brea is great ice cream at Mashti Malone's. And on the 2nd Floor of that same complex is a tiny bakery called Le Balcone, which makes great Russian desserts to take out -- if you can figure out a way to communicate with them.