Ummm... I don't think the bitch set him up this time.

Looks like Marion Barry didn't quite kick the crack habit. Mandatory drug testing in the fall (connected to a pending federal tax case against him) showed Barry had cocaine in his system. 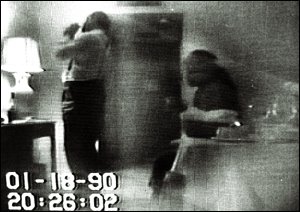 You know, the saddest thing about the Marion Barry phenomenon is that voters in DC keep wanting him to represent them in some capacity. I just don't get it. I saw people on TV just before the most recent election that got him back on the D.C. Council saying, "He's one of us!" I hope that's not true. He's not one of you, decent citizens of the District! He's a politician, a criminal, and a pretty screwed up druggie who used to do crack with in seedy hotel rooms WHEN HE WAS YOUR MAYOR.

I remember back in 2002, he was found with a bag of crack and some pot, sitting in his Jaguar, at a DC park. (I remember him claiming that the Park Police planted it on him. Riiiiight.) That year, he withdrew from the DC Council race. And yet, DC voters still embraced him and put him back on the Council in 2004.

Listen up, Ward 8 residents: he is not one of you. (Unless you drive a Jag, don't pay your taxes, and do crack. Then, hey, go ahead and claim him.)
Posted by Merujo at 9:47 AM

Having been born and raised in this city, Barry has been a thorn in my side for some time. When I heard about his recently robbery, don't think I wasn't already wondering what had really gone down; especially with his prayer for sympathy to his attackers...how...Christ-like.

Here's a funny story. Effie (the earlier wife) was once in Lord & Taylor in Chevy Chase...visiting for the day from her home in Hampton, VA. The salesladies were falling over her like visiting royalty...and good reason: she used to dump a bundle in the shops, while the D.C. tax paid chauffeur hauled her around town in her limo. The splendor of the grass, the glory of the flower.