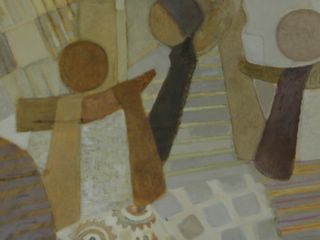 I have a few paintings at home. They were all purchased in Russia (well, some of them in the Soviet Union, if you want to be technical.) This is the heart of my favorite painting. It's untitled, and it was painted by a young woman - an art student from Azerbaijan. I found it in a tiny khudozhestvenniy salon in Moscow, on a side street off the Arbat, close to the Ministry of Foreign Affairs, behind what is now a McDonald's. (Back then, it was a grocery store with a really good bakery.)

I used to go to that salon all the time. It felt more like a museum than a store, and the patrons were always silent and reverential as they looked over the goods. I was young and living a tax-free lifestyle back then. It was wild to be flush with money and be able to point to an exquisite object and say, "I'll take that, please." Those days are long gone, I can tell you.

I remember having to drill through the concrete wall in my living room to anchor a hook for this painting. My brother brought his old Black and Decker drill to me from Germany on one of the Lufthansa flights he worked between Frankfurt and Moscow. (He also made me blackout curtains to shade my bedroom from the endless Russian summer sun.)

When time came for me to leave Moscow - something I was glad for, leaving a lot of urban instability and an unwelcome French "houseguest" behind - the embassy had a German moving company collect my things. I wasn't worried about getting my art and carpets out of the country. I was, after all, the customs expeditor. The Russian Customs agents I knew so well didn't even inspect my personal effects. They let me close the truck myself, twisting wires and pressing a Russian seal into a lead pellet.

However, shortly after my effects were packed and shipped to a warehouse in Germany, I uncovered criminal activity on the part of the shipping company. My discovery cost them their lucrative contract with our embassy, and, I'm sure, angered more than a few people in Germany.

They had their revenge on me, though. When my boxes arrived in the United States, some of my stuff was outright missing, including my multisystem VCR and my dual voltage boombox. My multisystem tv appeared to have been lifted out of the box and dropped from a decent height and then reboxed, utterly ruined. Small cartons of highly recognizable German animal crackers had been opened and dumped in the box of textiles, which showed damage by warehouse rodents. My crate of paintings had been wrenched open and drenched with cans of German-labeled Pepsi; the sticky, empty cans were left inside. It was devastating. I felt violated, and I knew it was a giant fuck you from the movers to me.

This painting suffered from the Pepsi attack. Brownish pools of cola had seeped through the paper protecting the canvas, leaving dark patches throughout. Some patches faded and others didn't. You'll see one washing across the yellow wrist of the musician on the left and another below it, a bit more to the left. I felt especially bad that this painting, which spoke to me in its soft autumnal colors and simple images, took the brunt of the vengence. And yet, even damaged, I felt it's beauty was not diminished.

I do not have a sophisticated eye for art. I never have. Not to sound like a wretched cliché, but I simply know what I like. After trying to clean the stains off, I put the painting up over the fireplace in my mother's livingroom, so I could see it and be reminded of my independence, even as I sat in my old family home, unemployed and directionless after nearly five years abroad.

My mother's vision was almost gone by this point, yet she could see the basic outlines in the painting and she understood how beautiful it was to me. When I was finally ready to leave, moving a thousand miles away from her for the last time, she asked me to leave the painting with her. I think I may have said something callous, not meaning to, noting that she couldn't really see it. And, I took the painting with me. In retrospect, I think she wanted to have something that was meaningful to me stay with her, as a connection. I think it made her happy. I wonder now how I could have been so mean and obtuse back then.

I regret not leaving the painting with her. Her final years were mostly painful and dark, and I regret not being there more for her. That's a deep, unsettling feeling that never leaves me. I regret that I was selfish and didn't leave her this simple, stained canvas. She could have enjoyed it for the mere handful of years she was yet granted. And I could have then brought it home to DC, knowing how much it had pleased her to have it.

Now, the painting is above the tv in my living room. I live in a small apartment that doesn't lend itself to the display of art. I have odd bits and pieces all over my walls - some of it represents the music I love, some of it, my travels. But the canvas painted by a nameless art student is the piece I love most.

I wish I could carry it back a dozen years and give it to my mom. I really do.
Posted by Merujo at 10:00 PM