I briefly escaped the apartment tonight. I had a quick errand to run and realized I had virtually no cash on my person. I drove a few miles up Rockville Pike to make a quick ATM stop. There is one fairly close to my place on the Pike, but it's poorly lit, set back from the road, and shrouded in shrubbery. Not a great choice, especially one night after a kid met up with drug dealers on the Pike and ended up with a bullet in his brain and his life draining away on a quiet Bethesda side street.

No, I opted for the horribly well-lit ATM next door to Hooters. Not exactly my stomping grounds, but I figure that, if anyone tries to snatch your money at this ATM, all you need to do is yell and ten guys, all wing-greasy and ready to roll with a couple of pitchers of courage filtering through their kidneys (and bloodstream), will come and beat the crap out of your assailant. Tonight, I'm not so sure that would have happened, though. Some nights, you can look over from the ATM and see a passel of average joes hangin' out, avoiding a return home to wife & kids (or an empty bachelor pad), chatting up the Hooteriffic ladies. But, on other nights, there seems something more sinister and seedy about the crowd out at the picnic tables - like tonight. The customers all looked like headshots from America's Most Wanted - overly wide foreheads, tiny eyes, and a sea of wifebeater T's. I started to wonder which one owned the van with the body in the back... Glad I didn't need to rely on the kindness of strangers this evening.

Leaving the lot, I saw the moon. It's full tonight and just radiating with a pale yellow glow. I stopped the car and just looked at it for a couple of minutes. It hung mid-sky, with a hazy halo crowning its amazing clarity. It was gorgeous. I'm a fairly simple person, in truth, and I get a kick out of a full moon or shooting stars. It reminds me of being a kid back in Illinois. I wondered if any of the scary dudes at Hooters had stopped to look at the moon tonight. Probably not. But, then again, who am I to say?

Driving home, I passed the protected wildflower meadow that sits in the middle of the Rockville stripmalls. It's so incongruous with its surroundings - the lights from CVS and the Silver Diner and the massive, fire-prone high-rise next to the Jewish Community Center. There's absolutely no breeze tonight, but I could still smell the strong earthy scent from the meadow, where stalks now stand a good four feet tall. The colors of the flowers are pale and weak this year. Last year, it was a stunning blanket of reds and blues and yellows. I wanted to sneak in once and have a friend take my picture there, with only my head showing among the towering flowers. But I never did it - I felt it was oddly vain to want someone to take my picture there, there's no place to park nearby, you're not supposed to set foot in it, and I was afraid of getting bitten by/stepping on something angry living in the brush. Ah well. "Wisdom" of age overtakes foolishness of youth... 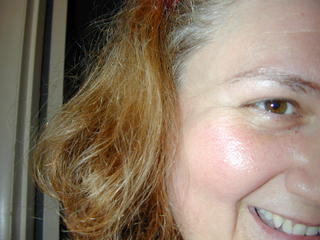 YOUR FACE HERE: 212-555-BLOG.
In the darkness tonight, it just looked like a thicket of weeds. The crickets within were chirping so loudly, I wondered if they could be heard from the top levels of the apartment tower. But then, an Escalade pulled up next to me, rims spinning, doors thumping with some bass-heavy tuneage, and the crickets were drowned out.

I got down to yet another strip mall, and my cell phone rang. I pulled in at 7-11 to answer - there was a sea of humanity pouring in and out of the store like a giant ant hill.

It was my niece calling from New Jersey, wanting to know if I was still planning on coming to my nephew's wedding next weekend. I've been hemming and hawing for some time now about attending. I've disowned one of my nephews for shameful behavior. (He refused to come visit his mother when doctors said she was likely not going to survive a septic infection - he said, "If someone calls and says she's definitely dying, I'll come down, I guess." I went utterly broke visiting my mom when she was sick. It's not optional.) That nephew is theoretically flying in for the wedding - he's the brother of the groom. I don't want to deal with him.

Additionally, my oldest sister's second husband likes to make rude fat comments and jokes in my presence. I've warned people I'm at the "I will throw punches" stage if he pulls that crap this time. Despite being the last of nine children, I was primarily raised alone, due to age differences, and I don't play well with large groups of my family members. I get stressed out.

I've had phone calls and e-mails from siblings telling me I need to come. I'm broke. It's a 4+ hour drive. I don't want to owe people money for gas or food. I don't want any drama. Ugh. But my niece says she has space for me in her home. She wants me to come up. I give her a half-hearted commitment before I hang up. And then, I just sit and watch the people come in and go out. 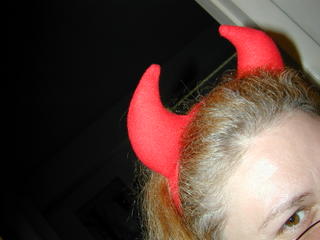 The devil drives a crappy Ford Escort.
And she is watching you. And taking notes.
Black people. White people. Asians. Latinos. A Metro train driver, still in uniform, picking up milk and bread. A cop stopping to get lottery tickets. Girls in tight jeans and girls in flowy peasant skirts, all wearing flip-flops. Guys with do-rags and basketball t's picking up cigarettes and Slurpees. A couple of weightlifters grabbing Gatorade. A homeless man with a large, enthusiastic dog on a leash that appears to be fashioned from plastic grocery bags. A homeless woman, one pant leg torn off her filthy sweats, swears and paces at the edge of the building, arguing with some unseen demon.

I bought a lottery ticket and a bottle of water. Time to go home.

Funny how tricked out SUVs vibrating with excessive bass can drown out the heady scent of wildflowers and the lazy glow of a summer moon... *sigh*

I agree, a 7-Eleven at night is really an anthropologist's buffet... truly a diverse cross section of our modern society in all it's glory.

"I was primarily raised alone, due to age differences, and I don't play well with large groups of my family members. I get stressed out".

As the youngest child, the unplanned baby of my family, I really resonated with that statement. When you spend half your childhood as the youngest and the other half as an only child, it is almost like having two childhoods. Not to mention that I also vicariously assimilated parts of my sibling's childhoods, especially their teen years.

This has led to a lot of confusion as to what "generation" I really WAS raised in and what really IS "my music"? I seem spread out over too many decades for my age.

The whole "family get together" thing really stresses me, too. My particular place within my family structure made me much more of an observer than a participator.

So, my sympathies are with you... If you go, take care and may peace and reasonable amounts of personal space be with you :)