I am a klutz. Can't help it. I've been a klutz as long as I can remember. I started to become astoundingly clumsy in college. I recall waking up one morning and rolling out of bed onto the floor below, having forgotten in the night that I slept in a loft with a goodly distance between me and the cement floor. I had the most amazing array of bruises ever seen on a human after that. It was quite something.

That next year, I tripped walking down a sidewalk with two friends. It wasn't a matter of Trip. Fall. Go boom. I tripped and did this arm-flailing, feet flying, Fred-Flintstone-meets-Keystone-Kops affair. I struggled to stay vertical for a whole block before finally falling on my face.

My friends were really impressed. One nearly peed herself laughing. The other one just said, "Wow. How the fuck did you do that?" (That friend, by the way, is the one who taught me how to swear freshman year. My mother was none too thrilled.) Neither one knew how badly I'd hurt myself falling, how much skin I was missing under my trouser legs. I tried to laugh it off, although I would have been thrilled had either one tried to stop me from falling so hard. Ah well, such is life.

I remain a massive klutz to this day. I have broken fingers and toes. I fell in the parking garage of my former place of employment and broke my leg, twisting my right tibia and snapping it like a chicken bone as I went down. After my inglorious ambulance ride, the hospital staff was certain I'd just twisted my ankle, and they kept applying ice to my foot. I kept saying, "No, no - something's wrong up by my knee..." Sure enough, I'd snapped that bad boy. They tried to give me crutches when I left, but I couldn't walk with them. They'd put my leg in a temporary splint that went up mid-thigh. They finally got me a walker, but, from stress, shock, and likely massively low blood sugar, I slid down a wall and almost passed out trying to walk to the lobby when they were done with me.

It really was horrible, and it was one of the first times in my adult life when I realized how scary it is to be single and have stuff like this happen. There was no spouse to come to my aid, and I was really spooked badly. I called three friends from the hospital, weeping and in a whole lot of pain (and, fyi, Vicodin doesn't do jack squat for something like this, where you can hear the uncasted bones tapping and grinding against each other at night.) I so much wanted someone to come down to the hospital to help me home. To make sure I was okay. But no one could come. The Sasquatch had to collect my car from my office garage (aka "The Scene of the Crime"), so his sweet, kind hands were tied - if he didn't collect my car by the end of the day, the bastards who ran the garage would have me towed. In the end, I took a cab home, stopping at a pharmacy where, thank god, they already knew me and ran my Rx to the car window, and then, after the cab pulled away, I was left to the challenge of walking what felt like miles from the street to my door.

I can't tell you how I made it up the stairs to my apartment. All I know is, I'm so glad none of the neighbors was home to witness me sobbing and hyperventilating as I slowly pulled myself up the steps. By the time I got in my apartment, having not eaten all day, nearly blacking out, I got to the fridge, opened a yogurt container and ate the yogurt with my fingers. It was not attractive, but my brain was starving by then. At that point, I wanted to see no one. I had tears streaming down my face, I was still dirty from head to toe from falling in a gross, wet garage, and now, I had raspberry low-carb yogurt all over hands and chin. The Sasquatch and his wonderful, lovely girlfriend were planning on swinging by to make sure I was okay and hand off my car keys (it would be weeks before I could drive.) I found myself, on the edge of hysteria babble-chanting, "Oh please don't come over now. Oh please don't come over now. No no no no no. Oh please oh please oh please. Nonononono..." The last thing you want at this low point is to answer the door, barely able to move with a freaking huge splint, and looking like you've been dumpster diving for dairy products. Even if it is your bestest friend and his bestest girl there. No way. No how. I was in hell, and I was staying there myself.

Showering is something to which you aspire. Going to the bathroom is an Olympic sport. Turning in your sleep without shrieking, wailing, and waking the neighbors - nearly impossible. Sleeping in a real bed is a dream (I spent months sleeping on my sofa because it offered me limited space for tossing and turning and was an equal distance from the bathroom and kitchen.) And I'd really like to thank that guy from Giant Food's Peapod delivery service who actually put away all my groceries for me that one time when he saw how pathetic I looked.

And then, there was my broken foot.

This is really embarrassing, so maybe I'll cut this story short. Let's just say this... if you're packing for a trip to Mexico at the same time you're ingesting foul substances, preparing to go in for a colonoscopy, here's a handy hint: make sure your path to the bathroom is clear of dangerous, foot-eating hiking boots. Otherwise, you might trip over said hiking boots en route to a biological emergency and BREAK YOUR DAMN FOOT. Yep. I broke my foot running to the bathroom. I actually split the ball joint that attaches the big toe to the left foot. By that night, my foot was turning black. But, I was stupid enough to not know if it was just a really bad stubbing o' the toe or if I'd broken anything. I thought maybe I should go to the ER, but, if it wasn't an emergency, I'd be out around $1K for the bill. So, I hemmed and hawed. The poor Sasquatch, long-suffering friend of yours truly, drove me to the hospital, where I still could not determine just how bad it was. By flashlight, we tried to assess the damage out in the parking lot. I finally wussed out and decided I would just call the podiatrist the next morning. I was scheduled to leave for a Mexican beach resort two days later. I started to get a funny feeling that wasn't gonna happen.

I hobbled into my office early that next morning. I took my sock off, saw that most of my foot was a rainbow of bruiseriffic greens and blacks, and applied a bag of ice. Two of my colleagues came in and nearly ralphed when they saw my foot, and they wondered why the hell I was at the office. (Why? Because, dammit, I still wanted to go to Mexico, and I had work to do before I left!)

Long story short: my podiatrist said, "Hey. If this ever happens again, this DOES qualify as an emergency and you SHOULD go to the ER." He also said, "Yeah, you broke your foot, you can't fly for at least six weeks, and here's a hideous velcro bootie to wear." Fun, fun, fun.

Handy hint #2: if you are a klutz, travel insurance is your friend. I'm glad I bought it. I went to Mexico two months later, and took one of my sisters with me.

Oh hell. I started writing this entry just to say that I went out and played lame-ass pool with the Sasquatch tonight. The klutz here has limited eye-hand coordination (along with that whole foot-body coordination) and I play pool like a lobotomized howler monkey. But, even so, it was a total hoot.

Strangely, though, I'm a pretty good shot at archery. Go figure. (One of my klutzier sisters is apparently one hell of a shot with a handgun.) I hope to have enough moolah soon to take some classes at The Archery Center in Northern Virginia - it's run by a former Olympic archer, and she seems really cool. They do a group one-time class for people bring friends out to try it out and see if they like playing with arrows. 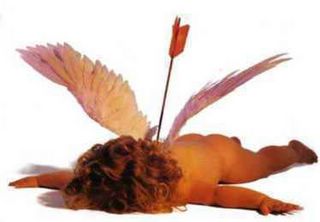 Just don't stand too close to me...

Oh man, that is a bunch o' pain you've gone through. You had me chuckling through tears. Brain starvation + broken bone + getting home = HELL. Yeah, that's one of those times where you NEED someone and you also NEED to be alone. Conflicting needs but I so understand them.

Oh yeah. I wanted some help and support, yet, if I had a roommate at that point, my head would probably have exploded!

Geez, how funny this is. I know fully well how clear the path must be to the bathroom when you are taking that horrible liquid in prep for a colonoscopy. I cannot believe that you were able to pack at all while going through that. I don't seem to be able to get out of the bathroom at those times.

I was insane to be packing that morning! What was I thinking?!?

The funny thing is, my foot still looked fine at the hospital when they gave me little footies to wear. It must have simply been so swollen that I didn't notice the pain. And, after the procedure, I was still a little out of it when I put my shoes back on. I thought, "Ow, man I really stubbed that toe big time."