Pretense and the Pen

I really don't like pretentious people. I'd say it was a Midwestern thing, but I've met plenty of pretentious Midwesterners. Perhaps it's a lifetime of humiliations, small and large. (This summer is a prime example - try being a plain-looking fat woman without an advanced degree trying to find work in Washington, DC - that's an exercise in humility right there.) Pretense is garish, pompous, unpleasant, sickly egotistical and makes one want to push the practitioners of this dark art down long staircases.

Recently, I witnessed a blogospheric explosion of pretense from a man who apparently believes that having a bachelor of fine arts in writing means that he has the right - and the duty - to call other bloggers on the carpet and tell them how much they suck if they don't blog to his high and mighty level. He railed on three fun, talented, interesting guys for writing bits and bobs about their lives - just like non-commercial bloggers the world over. He felt himself to be in a position to say that high-volume bloggers have a duty to their nation to do better.

I swear to god. National duty to be better bloggers.

This is just my opinion, but here goes... Really good writing can't be taught. The mechanics of writing can be taught, of course - and that's something I know I need. But to write something truly interesting, something that grips and consumes and entertains? I don't personally believe the core of that can be taught. It can be mentored and encouraged, but taught? Naaaah. It's something innate. Something you just have or you don't. Talent. A gift. If you don't have that, all you have is mechanical writing - likely better organized, and with better structure and grammar, true - but still, a cold process, not an adventure.

And, with the exception of a handful of writers who revel as much in pretense and ego-puffery as they do 6-figure speaking fees, most good writers aren't going to talk to you about "honing their craft" or "perfecting their tools" while they self-publish drivel no one else wants to read. Most good writers tell you things like, "appreciate a good editor" and "write in your own voice" and "have fun." I highly recommend Stephen King's On Writing for both a great read and some damn good advice. He doesn't talk down to his reader - nor does he talk about obligation.

This is something that this week's blogfoon ranted about -the obligation of popular bloggers to their audience. Sorry, Charlie. Last time I checked, unless you're charging admission, a blog's a blog's blog. A personal journal that anyone on the planet and stop and read and consider. Or ignore. If you're charging a subscription fee to read the funfest or intellectual rambling, then, sure, you have a duty to provide content to your customers. But, in the world of free access, it's anybody's game. And a gazillion new blogs pop up every day. 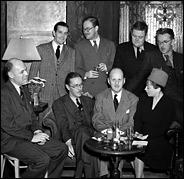 It's the Blogosphere, not the friggin' Algonquin Round Table...
I cringed at the number of blogs that exploded on Blogspot after Rosie O'Donnell's blog became common knowledge. Suddenly, hundreds - if not thousands - of people (mostly women) established blogs, most with only one or two posts, even to this day, just in the hopes that Rosie might visit them and bestow some sort of gift upon them. Some of these folks desperately wanted money or medical help, but many just wanted and needed Rosie to visit, comment, and validate their existence. I found that kinda sad.

But then I thought, well, what makes me any better than Rosie's unexpected sycophantic army? Nothing. I'm no better. I like to see how many people have hit my blog. It's fun to see when someone from some incredibly distant place stops by (usually for zero seconds, courtesy of the "next blog" feature) and I enjoy the small handful of comments I get. It's just fun. It's a nice distraction. And, while I do enjoy the writing exercise this offers me, I don't expect to be discovered by a publisher dying for the next great "fat chick lit" voice (if such a thing existed.) I'm not "honing my craft." I'm having a good time and venting and getting cranky and getting silly. Like most people out here.

Maybe I'm just a Luddite. Maybe the world of blogs will eventually surpass other forms of media for thoughtful discourse, but not its current lawless Wild West form. Right now, it's a free-for-all, and you never know when you hit "next blog" whether you're going to get a treatise on anti-Semitism in Europe, a picture of a baby drooling birthday cake, or just boobs. (Statistically speaking, you're probably going to be taking a trip to Hooterville...)

To those who just blog for fun, enjoy it. To those who see it as a serious endeavor, bully for you. Most of us fall in the middle, anyway. But we all have our own personal guidelines, so don't think that everyone has to conform to your set o' rules. No way, baby.

And for those who think bloggers have an "duty to their nation" just because a lot of folks hit their pages, I invite you to wave that freak flag high. It's a lonely little road you're taking, but I guess that gives plenty of space for your ego.
Posted by Merujo at 3:30 PM

Yep... just what the world needs, another self-important, pompous twit telling other people how they are doing "everything" wrong.

I agree, that self-proclaimed Blog Reformer is an idiot. People need someone like that, like they need a migraine or a root canal.

The Blog "belongs" to the average joe... that is the POINT... SELF EXPRESSION. I doubt that the idiot you were discussing has any comprehension of that.

Blogger's "owe" nothing, and I mean nothing to their readers. What egotisical drivel was that guy vomiting up?

I will take a Blog entry that makes me chuckle, makes me relate or helps me to understand someone better - over a finely tuned, grammatical masterpiece that is empty as a smashed Coke can anyday.

well said lady. if your goal as a blogger is to provide "content" on a theme for your readers, that's fine. but if it's just a forum for self-expression, as i believe most blogs are, then who cares what the content is. like you said, if you don't like what's on one's blog, you don't have to come back.

So right! I was really pissed off by the "only meaningful writing" BS on DC Blogs the other day. I'm so glad a link to this was posted in the comments. I'm tired of self-important people.

Where was a link to this posted?