I have no idea why, but I am mighty ill. I went to bed at a normal time last night - curled up with a copy of Ellery Queen. (I loves mah mystery short stories.) Figured I'd get in a wee bit of reading before crashing. But, for the first time in ages, I was really tuckered at a profoundly normal and acceptable bedtime, and I was out like a light.

And then, around 2 a.m., I woke up with a vicious pounding headache and the knowledge that my body was in revolt. Long unpleasant story shortened to more appealing Reader's Digest version: violent illness, fever, dehydration, and the pounding evil headache remains. 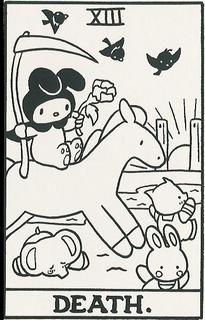 Nothin' like being feverish and gut-wrenchingly ill when it's friggin' hellishly hot outside. Oh yeah! Ugh.

I could not sleep. I ended up on the sofa, miserable by the sickly late night documentary light of the TV. I flipped between "Unraveling the Da Vinci Code", "The Mystery of Hogzilla" and "Wigstock", stopping briefly for fifteen minutes of "Robot Chicken" on Adult Swim. (I love you, Seth Green! You put in a "Big Trouble in Little China" reference last night: China is here, Mr. Burton.) 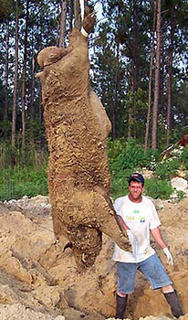 Did you know that domesticated pigs turn feral faster than any other animal? Apparently, they'll go from Wilbur to MonsterPig in a matter of weeks, and their hair will turn into thick freaky razorback-y fur. Within a generation, their kids' short snouts will revert to long, wild pig noses and they'll grow tusks. Creepy, huh? The wonders of nature... 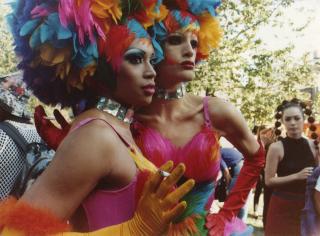 
There was one disturbing bit of business in Wigstock - a queen "gave birth" on stage to a naked, gunk-covered, pierced-nippled fully-grown woman. That didn't sit too well with my headache 'n' unhappy guts. (It was the Poltergeist-y chunks o' gunk and the the drag queen chewing through the cord that dredged up the nausea. Otherwise, I have absolutely no problem with drag queens giving birth on stage.)

Seth Green and his Robot Chicken co-conspirator, Matt Senreich. Y'all are demented. I so wanna hang with you guys!

As for the Da Vince Code show... Well, I haven't read the book - I'm so tired of the hype, I can't be bothered. I understand they're making a movie out of it, but they're afraid of insulting Catholics, so the filmmakers are going to tone down the religious aspects of the story. WTF? Isn't it all about Jesus and Mary Magdalene having gotten it on, produced a baby, and the Church then hiding the bloodline of Christ? Ummm... how the hell do you tone down the religious aspects of that??? That would be like Warner Bros. saying to the next Harry Potter director, "Listen, we love the kids, but could you tone down the magic references? Thanks."

It's past noon, and I'm still sick.

Feh. Didn't work. Back to the sofa with me. Seltzer water and saltines for this girl today...

Yuck. Rest, water, chicken soup, and all that.

I'm pretty sure Americans have better late night TV than we do. Still with 500 channels, I end up watching old episodes of CSI and Law and Order.(even the ones I've seen 600 times.) Alas.

I loved the entry about your mom. Thank you for that. And I hope you feel better soon.

We have not succeeded in answering all of our problems - indeed, we have not completely answered any of them. The answers we have found have only served to raise a whole new set of questions. In some ways we feel we are as confused as ever, but we think we are confused on a much higher level about more important things

I think I'm more confused than ever after reading your comment, bubba.

No kidding, Paul. If someone can decode Bullseye's comment, I might have to cough up some sort of prize...

/works at a uni so can say such things...