I went to the CNN.com website earlier today, and one of their freshly posted headline links was "Investigators: BTK Killer Took Corpse To Lunch." Appalled - and trying to figure out the mechanics of this - I clicked on the link. The story was horrible, and it focused on BTK taking one of his victims, post-strangulation, to his church where he posed her and took his own brand of boudoir shots. However, there was no mention of any lunch date. I even used the search feature on Firefox for "lunch." No go.

I went back out to the CNN.com main page and scratched my head. Then, I hit refresh. The page reloaded, and the headline changed to: "Investigators: BTK Killer Took Corpse To Church." Ahhhhh. Nice going, blockheads. Now, why don't you go post some living person's obit and really make my day!

So going to Hell, I'm amazed the earth hasn't opened up
beneath the courthouse and swallowed this bastard whole.
It would save the taxpayers of Kansas a whole lotta money...

Have you seen the Burger King ads for their horrid "Chicken Fries"??? These look like the most disgusting food product ever created. I guess it's just a marketing variation on the McNugget, but even the ad campaign is creepy, with the heavy metal band dressed up in chicken masks. Turns out the name of the band is "Coq Roq." Oooookay. They even have a website with videos for such songs as "Bob Your Head", "Cross The Road", and, ummm, "Nice Box." There are fake photos from the road, and, apparently, the site generated some early controversy when one of the pictures of the requisite Hot Chicks featured the title "Groupies love the Coq." Nice. 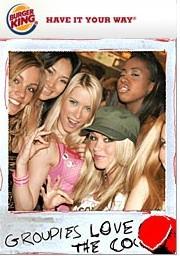 I like how some sensitive individual spared us that
painful "q" with a red digital thumbprint...
That one isn't up there anymore. Apparently, Burger King has a standard to uphold in selling deep fried chicken blobs.

Of course, Burger King had already crossed into the realm of creepy, but fascinating marketing with the whole "Subservient Chicken" thing. I admit, I still go there sometimes and try to make the chicken do unnatural stuff... then again, it's a 6-foot-tall chicken in a garter belt and it takes commands via the Internet, so, what can actually be considered unnatural in that particular big picture???

And now for the horrible mental connection I have between the first and second halves of this post: don't ask me why, but every single time I hear "BTK" I don't think "bind, torture, kill" - for some strange reason, "BK Broiler" goes through my head. There is no logical reason for this. I guess some short circuit in my head just sends it there.

Well, that's some small insight into me that you really probably didn't want.

Ok, so all in all, fucking bizarre.

Amen, mah sistah! The Subservient Chicken gives me nightmares, I swear to god.

Burger King is going to PETA HELL. Their guilt is worse the KFC's, truly.... and on so many different levels.

Regarding the BTK Murderer - that wasted piece of ****, I haven't watched or read any of it because I already suffer from such severe insomnia and I certainly don't need more gross, beyond comprehension fonder to ruminate over. Here is hoping that he get the Jeffrey Dahmer Treatment in jail.