I took a break today from job hunting and dealing with rodentia (did you know that dead mice under your stove smell a lot like a gallon of spoiled milk? I do... now...) I had a free screening pass to a fairly unique independent film down at the Landmark E Street Cinemas in downtown DC. (Niiiice theater, but, if you're payin', the tickets are $9+, regardless of the time. Eesh!)

There's an organization that ostensibly provides free advance showings of films for DC-area parents to preview movie possibilities for their kidlets. In truth, it usually ends up being a theater full of childless people, a handful of cinema snobs, Arch Campbell from NBC4, and some homeless folks who have wandered in for two hours of shelter. This can create some really interesting dynamics.

And let the hilarity ensue!

Today was unusual. We had a very different type of audience - one for the most part geared directly to the film being shown. The film du jour was The Aristocrats, a movie by Penn (of Penn and Teller) Jillette and Paul Provenza. (By the way, I met Penn Jillette on a shuttle bus at Dulles Airport once. It was the morning after the OJ Bronco chase. I'll never forget that because I was flying to L.A. that day, and I was supposed to be at the Penn and Teller show at Wolftrap the night before, with the Sasquatch. But, the Sasquatch had been dispatched to Tanzania by his employers, and I was stuck at the office until some ridiculous hour. Penn Jillette is very, very tall. He wears a lot of leather and silver jewelry - mostly enormous bad-ass skull rings. He's very polite. I was with my scary old supervisor - a woman who used to chew the skin off her thumbs and draw strange symbols on office memos - and he was extremely gracious with both of us, despite the fact that she was insane.)

Basically, The Aristocrats is the telling and retelling of a hideously filthy joke, over and over and over again, by a ton of really talented comedians. The the premise of the joke, which has been told for decades and decades by comedians - but only to each other - is this: a guy comes into a talent agent's office. He proceeds to describe his "family" act, which, depending on the comedian telling it, includes violence, masturbation, bestiality, all things scatalogical and beyond. The simple punchline to the joke is this: when the guy finished describing his nightmare act, the agent says, "Holy crap. Just what do you call this act?" And the guy says, "The Aristocrats!"

That's it. Either you think it's funny in the telling, or you just don't. Apparently, when this was premiered out at Sundance, some audience members just screamed in horrific, yet delighted laughter. Others just walked out.

Today's audience was split three ways - working stand-up comedians, film critics/reviewers, and a very tiny handful of people like me, with our free screening passes and advanced knowledge of the subject matter. (I was really relieved that there were no kids there. Whew.)

I won't go into the details here, but I will say this - Bob Saget, you are one filthy animal! I bet the peeps who used to watch him on Full House or America's Funniest Home Videos would all have massive coronaries if they had any idea just how twisted, sick, and wretchedly dirty a comedian he is. I already knew that Saget was a sick F'er - as did the the majority of the audience. As soon as he appeared on the screen, everyone bust a gut laughing, knowing what horrors were coming. 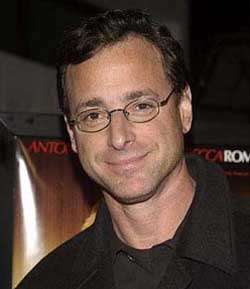 One majorly twisted mammajamma.
No wonder the Olsen twins are so screwed up!

This isn't everyone's cup of tea - hell, it's not most people's cup of anything - and it certainly doesn't need to be seen on the big screen. But, in an utterly sick way, I really needed this kind of awful belly laugh today. I think some of my older siblings would be appalled that I howled at this, but hey - sometimes you just really need to cut loose.

An interesting point here. Three weeks after 9-11, the Friars Club went ahead with a long-planned roast of Hugh Hefner. The roast was, of course, at the Friars Club in New York City. No one was sure what was funny. No one knew when to laugh. Gilbert Gottfried, of all people, got up and made an ill-advised joke about wanting a direct flight home to L.A., but only finding one that made a stop at the Empire State Building. People started booing and yelling "TOO SOON!" Not knowing what to do and seeing that the evening just wasn't going anywhere, Gottfried threw caution to the wind, and, breaking with the "inner-circle-only" tradition of the joke, proceeded to tell "The Aristocrats" to the assembled guests. According to witnesses, it was the most amazing telling of the joke. Ever. People who hadn't cracked a smile in nearly a month found themselves falling on the floor and weeping with laughter.

Now, of course, I'm back in the land of the stinky rodent corpse, working on revising my resume. Tomorrow I have a networking event/job fair/whatever to attend. Time to pull out the work shoes and iron some clothes. Hopefully, I'll get a really good bite or two out of this. Heck, maybe I'll pull a nice big one all the way into the boat.