Ever had one of those days? Where the weirdness and the unfortunate incidents just don't stop coming? This has been The Day from Hell.

1. Overslept (despite the spicy Latin alarm I put on my cellphone in honor of Cinco de Mayo)

2. Had to convince my second oldest sister (who has MS and falls all the time and can no longer walk up stairs) to puh-leeeeeze not let the kleptomanic lush from her old office into her home anymore - jewelry is missing and my sister still has a pair of my mom's WWII wings in her possession...

3. Waited half an hour for some scatterbrained woman to show up at the AU library so I could help her, gratis, develop a resume (every idea I had for her, she shot down - she's 50ish and has never held anything but a temp job) 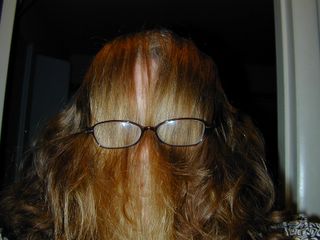 Astounding and terrifying!
The curious Madame Merujo after missing only one
course of Dr. Feldman's Miracle Medicinal Powders.

5. Found that the exterminator and the carpenter STILL didn't come today

6. Spent $15 on registration and $14 on parking for a jobseekers conference (held in the office where I had my most recent unsuccessful employment interview - yippee!) that turned out to be a total Mongolian goat rope. The only people who wanted to talk to me turned out to be closely involved with the people who threw me out of my last job for being a "potential axe murderer"... (More on that in some other entry, when my sense of humor is back...)

7. Discovered that the metal beads on my Kyrgyz necklace were rusted and had left a fist-sized smear of brown across my blouse

8. Got all flop-sweaty from being off my medication schedule and looked like I had spent an hour in a sweat lodge (always a fine impression to be made!)

9. Was followed all around the conference by the resume woman from that morning (aaaaargg!)

10. Could smell the dead mice in my kitchen walls from the communal hallway in the apartment building when I got home (nice) 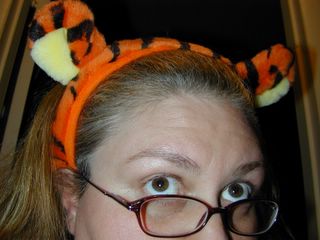 Our heroine ponders methods of rodenticide...

11. Found out I had totally insulted a friend through an entry on my blog

12. Got two more letters of rejection

13. Learned that my sister had decided it was okay to let the kleptomaniac lush back into her house - if supervised by her totally inattentive husband - but fibbed to another of my sisters about it.

Tomorrow will be better. It really, really will.
Posted by Merujo at 10:35 PM

I am terribly sorry to hear about:

"The Day From Hell".

After carefully reviewing each distinct and frustrating episodes making up said day, I grant you and your day, my genuine 14k gold "Hell Day" trophy. I am sorry that it does not have the dual purpose of scaring away mice.

Personally? I really thought it was going to be a good day... afterall, it was 05-05-05 when written out... that only happens once every one hundred years. That turned out to be about the only special thing about it. I never even got to eat Mexican food...

I won't go into my details this time... but just let me say that I am seriously wondering if I need some "anger management" classes.

PS: Love the hair and the tiger ears... they can destroy your spirit, but yet the humor remains intact. Fascinating! :)

I actually did manage a Mexican lunch before going to the conference. Smoky chile and chicken quesadilla from Baja Fresh. Yum.

Trust me, you're not the only person who's considered the need for anger management classes...