Compare and Contrast: The Bolton File

"It is my opinion that John Bolton is the poster child of what someone in the diplomatic corps should not be." - Senator George Voinovich, R-Ohio

"There is no such thing as the United Nations. There is an international community that occasionally can be led by the only real power left in the world and that is the United States when it suits our interest and we can get others to go along..." - John Bolton, What a Guy!

"If the U.N. secretary building in New York lost 10 stories, it wouldn't make a bit of difference..." - John Bolton, Pissing People Off 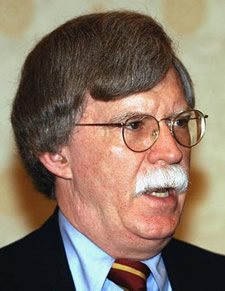 The satanic love child of Wilfred Brimley shows off the Wonk Look for Spring '05...

Johnny Boy hates the U.N. I mean he really hates the U.N. Yet, in some twisted act of sado-masochistic diplomacy, the wacky Texun (like Steakums, but with less taste) White House has decided that he da man to represent us in the United Nations. Nice work, Dubya. First, you saddle the World Bank with Paul "Spit makes great hair gel" Wolfowitz, and now this. (Although, at least for Wolfowitz, I will say this - he was apparently a World Bank customer well before his appointment. Word is he's been making deposits at the Bank - or at least in one of its employees - for quite some time. I wonder how that whole conflict of interest thing is working out for them???) 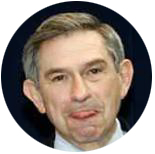 The World Bank - now with E-Z payday check cashing for all debtor nations!
Here, Nigeria - have a lollypop!

Now, I'm not saying that the United Nations is a perfect organization. Hellllll, no! In fact, there's probably more graft and corruption there than in most international bodies, dog shows, and the Golden Globes (circa Pia Zadora) combined. The U.N. could use a good institutional tongue scraping, if you know what I mean. I think one of SNL's finest moments in recent history was their sketch on the U.N. security council members debating where to best violate NYC parking regulations and to which tony restaurant they should retire at the session's end. It was beautiful.

Just a week ago, I watched a docu-drama about the nascent U.N. and Eleanor Roosevelt's work with the commission to develop the Universal Declaration of Human Rights. It was very inspiring, in a 1970's made-for-tv sort of way, and it gave me temporary warm fuzzies for the U.N.

So, we have a somewhat tarnished organization, and, instead of wanting to send someone there who might see some hope of the U.N. regaining its luster, Dubya wants to send a bureaucratic weasel so ill thought of, his old boss at State, Colin Powell, declined to provide him a recommendation. I know there are those who would say, "Well, this is good. He will shake up the structure and provide a wonderful foil for those wacky developing world types." Yeaaaah. Not quite. It's just another opportunity for the Bush administration to spread more of it's down home Amur'can good will, like a layer of festering horse poop.

However, I'm pleased to write, a handful of high-ranking Republicans have publicly dissed Bolton today, and I'm confident that he will not win senate approval. But, if the White House has already started to engrave the business cards, may I make a suggestion to save some taxpayer money? How about nominating another Bolton? 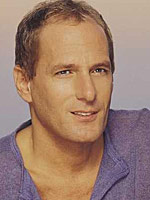 Seriously, I'd take Michael Bolton over John Bolton any day. Is Michael a derivative white soul boy with limited talent and the inability to write or sing any original material? Well, yeah. Sure. But at least he's not a Land's-End-buttondown-Supercuts Spawn of Satan. And Michael has finally tamed his hair demons. John has a crazed herd of confused, multicolored fuzzy caterpillars wreaking havoc on his head and face (and that just cannot be good for one's concentration.)

Michael Bolton: has a policy of always having some new international show in development (usually for European tv)

John Bolton: has shared his thoughts about the U.N. in nasty kiss-off speeches and reports

Michael Bolton: has written songs with Cher and KISS

Okay, you get the picture. All in all, I think Michael Bolton would be a much more entertaining and personable rep for us in New York. We need some good press. We need someone who won't alienate the few allies we have left. Seriously, it's time for the softer side of Sears, okay?

All jokes aside - I just went to Michael Bolton's website. I have to say, the guy's doin' some good work. He set up a charity to assist at-risk women and children and serves on the boards of several solid organizations focused on health, safety, and education. And he got rid of that friggin' mullet.

Holy crap. He would be a better U.N. ambassador than John Bolton.

Surely that can't be John Bolton's real hair...or is he one of these modern day guys who dies his hair. Bit stupid though with a white tache. ;)

It's awful, isn't it? But, truth be told, there are a zillion guys here in DC, all with that "I'm an upper level government worker" look here, including the awful hair... Ugh.

You are just too twisted.

Aim high! This is as close as I am likely to get to any meaningful political commentary.