A couple of days ago, it was "Princess Layla". Tonight, one of the Fox anchors (who has probably never seen a Star Wars movie in her life) cluelessly commented on the line of fans outside the Uptown Theater, noting that the line was sure to have a lot of "Whoopdies and stormtroopers!"

Whoopdies. Big, hairy Whoopdies. Maybe they come from the same universe as the Ewops (the much-maligned butt of many intergalactic ethnic jokes), the Truckin' Raiders (they're angry and they follow The Dead on tour), and the Taunt-Taunts (cruel beasts of burden that mercilessly mock their riders' appearance, weight, and place of national origin.)

Then again, I could be wrong. 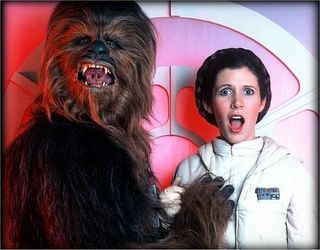 Hot Whoopdie action, Hoth style. I snarfed this from someone else's blog.
I really don't recall the "Chewbacca feels up Princess Leia" sequence in "The Empire Strikes Back". This is just wrong. Where is the Norwegian Red Cross (or the guy with the Purina symbol on his chest) to stop this interspecies boob grab?!?

To those standing in line for tonight's midnight showing, I say - stay hydrated, don't let anybody cut in front of you, and watch out for the whoopdie doo.

I think your local TV Anchors do drugs on the side... but then, what do I know? I am just a stupid Whoopdie. :)

I just smacked my forehead when I heard that. I can't wait to hear what they say on the 11 p.m. news. I'm hoping for another screwed up Star Wars report.

Me thinks that the TV Station might be a 'er... "fun" place to work. Hhhmmm...Parties on the side and getting paid to make up new words... sounds like my kind of gig.