Just a few quick pics, taken on the fly last week as I drove to my favorite caffeine-and-free-wifi place, Mayorga Coffee... 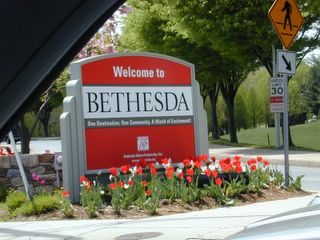 I live in Bethesda, but three miles north of this welcome sign. This marks the hunting grounds of the elusive Sasquatch, who likes to say I live in "North Bethesda." My usual response to that is "Bite me." We have the same ZIP Code. This sign is better than the ugly retro sign they used to have, but not by much... 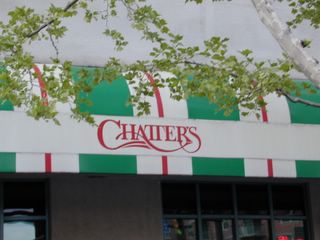 A pox on all your public houses!

The scourge of the suburban Amur'can landscape: the stupidly named sportz bar/casual dining/happy hour joint. Chatters, Haha's, Fridays, Chili's, Tchotchkie's. Ugh. Don't forget to wear your minimum of 15 pieces of flair! But, if you want to watch a game on a big screen (and you don't mind overpriced, flat cola and undercooked appetizers), it's okay. Barely. 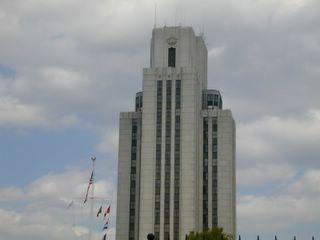 Big Brutha is watching you!

The tower at Bethesda Naval Medical, across from the National Institutes of Health. If you've seen the movie "Dave", you know this place. This is where presidents go for check-ups, after they've been shot, or, in the case of "Dave", where they go to die after having a stroke. You used to be able to drive through the campus and eat at their Mickey D's, but it's a secure facility now. Has been ever since the morning of 9/11. It is a Navy facility, hence the flags. I can't read that crazy naval language there, but it probably says, "If you can read this, you're trapped in our security access traffic. Suckers." 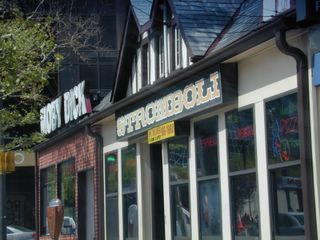 Two places for GREAT food. Moby Dick does great kabobs with fresh puffy pita bread (hence the Moby Dick moniker - great white puffed beasts). Stromboli is a holdover from the days when Bethesda was a white trash semi-rural suburb of DC. They make good Italian food - the best thing being their strombolis (otherwise known as calzones.) I highly recommend the Christopher Colombus, made with ground turkey. Damn, it's good! 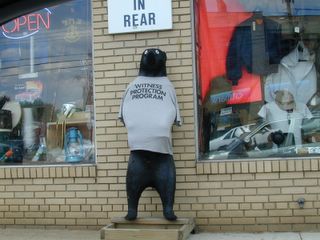 Supplies for the sportsman, the survivalist, and the weekend warrior alike. The bear is always outside. He has another t-shirt that reads "INNOCENT BYSTANDER". 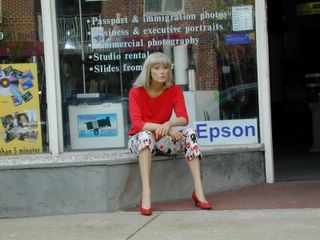 Like the bear, she is always out there. There are still days when I'm driving by and her wig is blowing in the wind, and I completely forget she's a dummy.

When I get a chance, I'll take some pictures of downtown DC. Non-tourist style.
Posted by Merujo at 6:27 PM