Tonight's Concert Has Been Erased...

It would appear that Erasure is a wee bit run down after 10 consecutive nights singing (and partying, no doubt) in NYC, followed by two more nights in Chicago. Considering the fact that Andy is HIV+ and, by his own description, in pain 24/7, I'm not surprised. By my count, they've played 37 gigs in Europe and the States since February 24th. That's a hefty schedule, Mr. Bigglesworth, especially for someone with a damaged immune system. 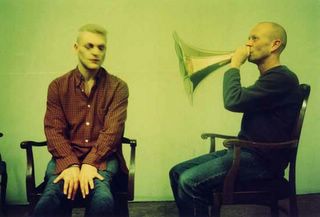 The curious Mr. Clarke avoids passing cooties to the
exhausted Mr. Bell through use of the ingenious and
highly-coveted Edison Germ-a-Phone.

So, sadly, tonight's 9:30 Club gig, to which the Sasquatch and I had tickets, has been postponed until June 6th. And, while I'm disappointed to not hear the boys tonight, we'll now have the fun of being the end of the tour (or, as I like to think of it "anything can happen day!) Plus, the weather will be better for standing in line (unlike tonight's chilly rain), and, even better, June 6th is the Sasquatch's birthday.

SLEEP! TAKE SOME VITAMINS! HAVE SOME CHICKEN SOUP!

We'll be waiting in June...

UPDATE: folks in NYC and Chicago report that Andy was hoarse and had trouble singing over the weekend, so this is much-needed rest. Also, some poor bastard flew in from Denver (DENVER?!?) today for tomorrow night's postponed DC gig. A carload of people who had driven from Detroit were seen wandering around the 9:30 Club, circa 6 p.m., feeling fairly unhappy. (But they live in Detroit, so isn't unhappiness a relative concept???)
Posted by Merujo at 7:14 PM