A Celebration of Difference

Last night, the Alasko-American and I trekked up to Capitol Hill to see a show called "Tearing at the Seams" at the Market 5 Gallery. The gallery is located in an old red building that bustles on weekends with shoppers and strollers visiting the vendors of Eastern Market. In its earliest incarnation, the building was used for slave auctions, and I can only imagine those auctioneers of old were spinning in their caskets at a rapid clip last night as a parade of black, white, latino, and asian people - skinny, fat, queer, straight, and some I could not identify - performed their hearts out.

A cabaret and makeshift crafts market, the event featured not only performers, but vendors selling t-shirts and jewelry and gynecological self-exam kits (I passed on that, thanks.) There were paintings on display and a very studly young man (in a purple vinyl skirt) being painted. He had to be melting under all that stuff. It must have been nearly 90 degrees in the building. I thanked God every single time a breeze kicked up. (And God bless the Alasko-American for buying me an ice cold Diet Coke from one of vendors. That was like a religious experience.)

Was "Tearing at the Seams" an evening of high art? No. Definitely not. Most of it reminded me of a sweaty junior high school talent show (in a junior high school with very, very liberal policies and worldly, but mostly well-adjusted children). But, clearly, it was all from the heart, for a good cause, and allowed people to express themselves in ways that they might never otherwise have an opportunity to pursue. I laughed and smiled and clapped and hooted a whole lot. And, for once, as a fat chick with funky clothing taste, I didn't feel like an odd duck in a Washington audience. (DC often reminds me of what Jack Nicholson said as the Joker: "This town needs an enema.") What a friendly event this was, marvelously close to Our Constipated Congress™ just a couple of blocks away.

I won't give a full review of the show, but here are some pictures to give you a taste. My apologies for the quality of the images. I was trying to shoot without a flash, so I ended up with mixed results... 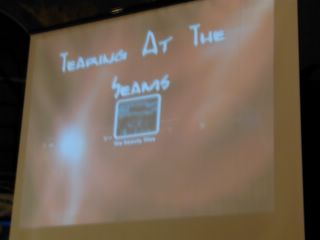 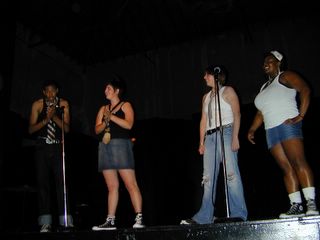 Our four MCs for the evening. The guy at the left was adorable and funny. You just wanted to go up and hug him. 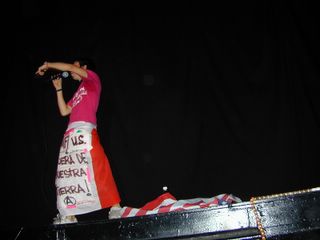 A young Peruvian (who will become a U.S. citizen on Monday) does some solid slam-style poetry about the destruction of Peru from outside forces. This was really, really good. 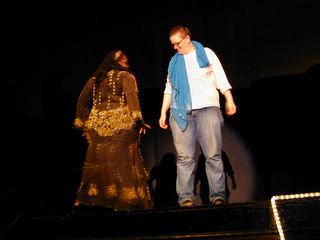 An amazing fat belly dancer blew us all away. Sadly most of my pictures of her are blurry. She brought up this nice butch girl from the front row to dance with her. 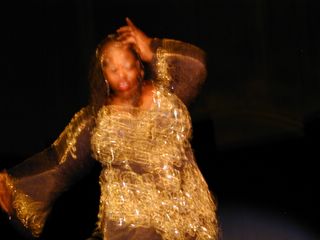 One of the blurry pics of the belly dancer. I could lie and say I was trying to be artistic here, but I won't. I'm just a bad photographer. 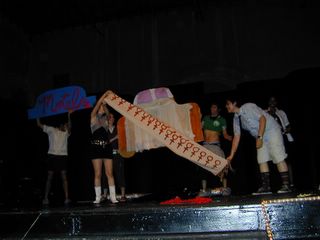 One of the silly, fun musical numbers. A lot of water was spilled on the stage. 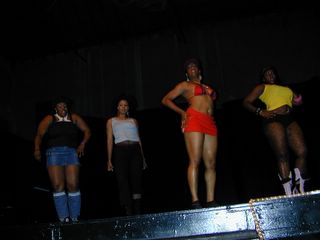 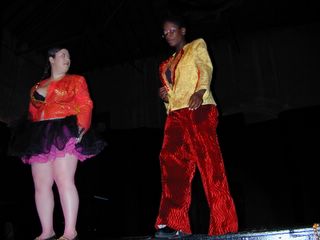 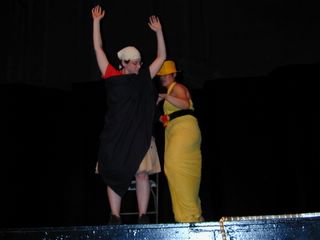 Audience participation fashion. There was a lot of polyester in this particular one. (And an unexpected flash of female parts.) And, god, they all had to be melting up there. It was hotter than Hell in the gallery. 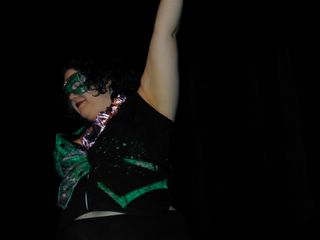 And a little more fashion... I question the utility of this ensemble. 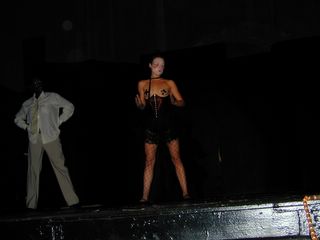 A Canadian named Skyler provided us with some marionette-ish burlesque. 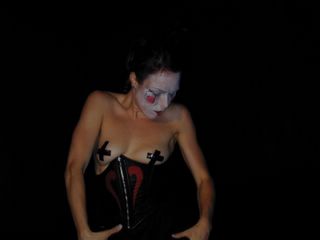 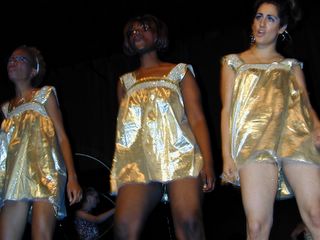 A little doo-wop from a heartbroken bride and her bridesmaids. (She was left at the altar after her man ran off with the priest...) 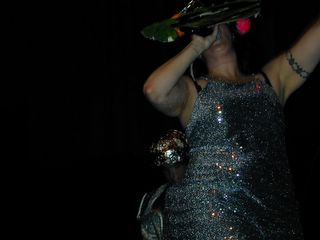 The grand finale featured some vocals from this diva, who had a tail and large green mask. You couldn't hear a word she sang - the speakers were maxed out. 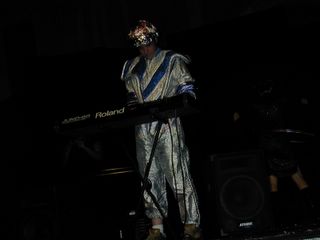 Accompanied by TRON MAN! (They ran Tron on the video screen next to the stage. I didn't really understand it, but, hey, it's art, right?)

Driving over to pick up the Alasko-American around 7 o' clock, I had passed the Corcoran Gallery, by the White House. The elite were gathering in black tie for some event. I cringed at people in black jackets and wraps in the near 90-degree heat. Made me ill to look at them. At the MCI Center, people were paying outrageous money to see Mike Tyson lose, plus $20 for parking, plus god knows how much for dinner and drinks... The traffic was horrific.

Tearing at the Seams required no fancy dress, just a donation to get in, the parking was free, and the crowd was friendly. It may not have been high art, but I'll take that community over many snootier ones in DC any day.