I'm sending out cover letters and resumes. It's the daily ritual. The maniacal lawnmover men of the Parkside Condo Association maintenance office are razing the grass outside the building. I swear they mow every other day. It seems like overkill to me, but what the hell do I know?

I do know that it's hard to concentrate on groveling when the mower's outside the window. So, I rev up iTunes and plop my Logitech headset over my ears (I bought it for Skype'ing - Skype rocks, btw.) Today's jobseeking music is the brilliant Buffy the Vampire Slayer musical, Once More with Feeling. (I was trying to find an appropriate image for this post and ended up with something from a German Buffy site, hence the title of this post. Tomorrow's German phrase that pays, kids, is "Herr Maier hat meinen Pudel vergiftet.") 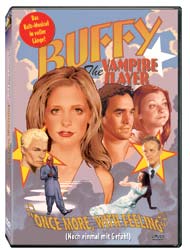 Buffy was a fun show. It was also a good show. A really, really good show. Heck, I was a fan before there was a show. I loved the movie. Remember this gem of dialogue between Amilyn (Paul Reubens) the freshly one-armed vamp and Buffy (Kristy Swanson)?

Amilyn: We're immortal, Buffy. We can do anything.
Buffy: Oh, yeah? Clap.

Joss Whedon is a damn genius. I envy, envy, envy him.

I freely admit it - one of my great failings (among many) is my glowing green-eyed envy of people who can actually harness their creativity and make a life out of it. I know I have the attention span of a newt, which means that I have dozens and dozens of unfinished projects lying around me, like little half-formed children, abandoned, before they ever got a full measure of breath and life pressed into them. A small handful of people have told me I have a measure of talent. Maybe it's true. Maybe it's just friends being kind. If I do have any talent, I don't seem to know how to bring it to fruition.

I know of at least two people who read this blog who make their living from their words. Do you have any suggestions or advice that might not only benefit me, but other people who can't make the leap? I find no joy in office work. I don't really want to push papers. I want to fill paper with words and thoughts and stories. Is it too late? I see my birthday this year, ending in a zero, as a major threshold to pass over. I would like to have just one thing published (and no, a blog read by 10 people doesn't count, does it?) before I turn 40. How do you breathe life into your abandoned children?

Arrrrg. "The Sacrifice" is playing on the Buffy disc now. It makes me sad. I'm such a sap. Too old and too young. Where do you fit in when you don't fit in?
Posted by Merujo at 4:48 PM

i understand the frustration of trying to figure out how you fit in when you don't. and the frustration of the unfinished creativity.
and the love of all things joss whedon. i also understand that...
unfortunately i don't have answers. only my own questions.
but i believe the answers will come in time...ever the optimist...
(i also am facing the birthday that ends with a 0...a strange time...)

It is a strange time, isn't it? I'm supposed to be a grown-up now, but I just don't feel like one. Not yet.