Chicken Nuggets of the Gods

Had a mall food court dinner with the Sasquatch this evening. Montgomery Mall (home of recent multiple stabbings and an attempted child molestation) has an Apple store, and, as the Sasquatch periodically must go to worship and tithe to Steve Jobs, I hopped along for a look-see. (Kinda like a Catholic attending a Lutheran Christmas service.)

I have nothing against Apple. Were I not all PC'ed up already, I would easily turn to the Other Side. But now, it would be too much of a financial issue. Plus, then I wouldn't be able to amuse myself by teasing my bigfoot buddy with gems like:

"Oh, that's right. You don't have a computer. You have an 'Apple product'."
"Oh, look. They didn't even put the word 'Apple' on the storefront. Just a big, pretty symbol. It's nice that they cater to you illiterate folks."
"It would be great if you could use this software/game, but they don't make it for the Mac."
"That's a pretty paperweight!"

I kid. Honest! I've mentioned before, I've had a helluva time visiting Apple on business trips. Really excellent fun and very cool people. And they let me play with the toys, which was fun. And I got to call the Sasquatch long distance and taunt him with the fact that I had achieved his Mecca. Bwah hah hah!

Sadly, tonight, the Apple store could not satisfy the Sasquatch's shopping needs, but the trip to the mall (aka "America's Lowest Social Common Denominator") was not a total loss. For, you see, the food court has a Chick-fil-A. 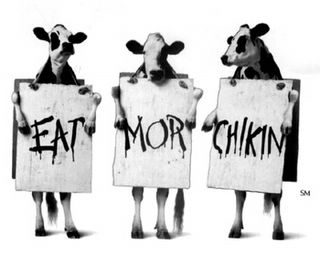 If you have not had the Chick-fil-A experience, dude, you are so missing out. I have no idea what sort of addictive narcotic substance is crushed into their chicken nugget coating, but it's like crack. (Wow. Two references to crack in one day. My my my.) It's the damn tastiest chicken in the world. Chick-fil-A also makes the best lemonade ever. I drink their diet lemonade, which is tart enough to make my head partially implode, but incredibly refreshing.

Then there are the waffle fries. I no longer partake of the waffle fries, as I'm trying to be a good doobie - I take the tasty fruit cup instead. (Hey, guys - could you be a little less stingy with the pineapple and orange? I mean seriously - it's all apples and grapes. More citrus, dammit!) But there are people who worship at the altar of the waffle fries, giant soft puffs of lightly fried potato goodness. Others do a better job of waxing rhapsodic about the tuberifficness of these babies, and I'll let them pay tribute. For me, it's all about the chicken nuggets. Holy crap, they're good.

Chick-fil-A is run by a very steadfastly Christian family, so all the outlets are closed on Sunday. And yea, the lord god did say, on the seventh day, the nuggets shall rest. And they did. And it was good. But the pagan mallgoers did weep. Oh yea, they did. For they were consigned to the misery and punishment of Panda Express, Everything Turkey, that scary-looking deli, and Cinnabun.

But on a Saturday night, for a quickie dinner at the freaky mall with my best bud, the Chick-fil-A, well, she doth rock.
Posted by Merujo at 10:12 PM

In the words of a mutual friend: "Sweet Jesus, I love their fries!"