I weep for Britain (once more, with feeling!)

I have a friend in the north of England. He's a fairly quirky individual, and back in 1986, he introduced me to The Smiths and taught me to appreciate vegetarian Indian cuisine. (He's also the only person with whom I've ever gotten into a political "debate" that got physical. I threw a large bottle of laundry detergent at him. As I recall, he deserved it. Colorful days in Thatcher's Britain...) He grew up in Cumbria - the lovely Lake District, where tourists go to look at the pretty sheep and slip, fall, and die trying to walk the Fells.

Today, he called and we had one of our fine "is your country entirely mental?!?" discussions. One of my harping points this afternoon was the recent UK chart climb of the dumbass Crazy Frog ringtone. Said my friend, "Ooooh, no! It's gotten much worse!" And it's his own part of England that's to blame for this latest bit of awfulness.

In an effort to boost tourism in the Lake District, the Cumbria Tourist Board has built a lovely little website. A fine thing to do, indeed. But you see, the crafy Cumbrians have not stopped there. Creative geniuses they are, they have decided to climb on board the hot ticket express by expanding into the ringtone business. By combining Cumbria's local sheepage with a classic piece of England's musical heritage, the Tourist Board hopes to inspire vacation-seekers to come frolic in their green and pleasant land. 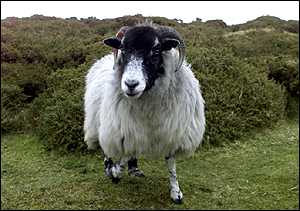 It's really awful. I mean, the stupid Crazy Frog/Axel F thing was just stupid. But to reduce the poetry of William Blake to sheep backed up with a Casio keyboard... to play on your cell phone...

About the ringtone, the Tourist Board site reads in part:


"It is set to become the must-have accessory for hill walkers, shepherds and farmers everywhere – a sheep ringtone! Just as the Crazy Frog craze appealed to the young and urban, it is hoped the reworking of Jerusalem by The Baarmy Sheep of The Lake District, will appeal to those with a love of the countryside and outdoors..."

But of course. Because nothing says "Smell the fresh country air!" like sheep and keyboards and mutated culture pouring out of your LG flip phone...


Just in case you're too young to remember "Chariots of Fire", here's the distinctly, truly English poetry of Blake:

And did those feet in ancient time
Walk upon England’s mountains green?
And was the Holy Lamb of God
On England’s pleasant pastures seen?

And did the countenance divine
Shine forth upon our clouded hills?
And was Jerusalem builded here
Among these dark satanic mills?

I will not cease from mental fight,
Nor shall my sword sleep in my hand,
Till we have built Jerusalem
In England’s green and pleasant land.

And another poet spins in his grave like an overheated Chernobyl turbine...
Posted by Merujo at 6:06 PM

Well, Blake did mention a lamb and pastures, so maybe we have to cut the ringtone people some slack.

Or, maybe not. That really was awful.

Horrible, isn't it? Imagine hearing it over and over again on the streets of London...

Oh no! That is hideous! Lol.

I love the Lake District, it's one of my favourite places in the UK!

And strangely enough I have been studying William Blake poetry recently, well until May when I did an exam on it.

We didn't actually study Jerusalem though...

But see as one thing that runs throughout is the mention of Lambs...it's technically an appropriate choice!

I just hope no one has chosen the tone when I go there this summer! :-S

What a wonderful place to go in the summer! My friend from there once made me a tape while he was just walking around, occasionally stopping to have sheep provide commentary. It was hilarious. God, that was back in 1988, my senior year in college.

Am I really that old?

Enjoy the sheep! And be careful if you walk the Fells!!