Got back from the Mountain Stage workshop afternoon a while ago. In all honesty, I only went for the Q&A with Michael Penn, but, were I a working/aspiring songwriter, I would have gladly stayed all afternoon.

I paid my $5 and went up to to classroom where the Q&A was to be held. There were a couple of technicians at the back, fiddling with recording equipment and an elderly couple already seated in the front row. By the time Michael and Eric Brace (of Last Train Home) arrived, it was 2:15, and we had achieved 5 audience members. (We had 10 or 12 by the time all was said and done.) I was bummed at the low turnout, but also glad for the handful of musicians present who got to ask questions about the songwriting process and musicial influences. I was happy to sit and listen and learn. I felt bad that I couldn't afford a ticket for tonight's show, especially after hearing the evening's host and another of the musicians speak. I think the audience is going to have a great time. 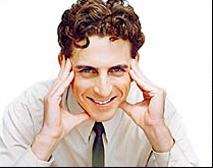 MP. Buy his music. Start with Resigned. I think that's a good introduction, and it's my favorite. If you live in L.A., go see him play at Largo!! What a treat, you lucky SoCal bastards!!

At the end of the session, I met up with Michael in the hallway. He was standing by himself, so I called his name and put my hand out to shake his (I tend to be very guy-ish about introducing myself to people. It's effective and gives people the perception that I'm not just some random nut.) I explained that I was one of the "PennListers" and he smiled, saying, "Oh cool! Thanks for coming!" He was very charming and friendly. For some reason, I was expecting him to be more tentative, but that wasn't the case at all. I reminded him of a silly story I shared with Spencer (the prince of the PennList) about how my copy of "March" was stolen - repeatedly - from my apartment in Moscow. His face lit up. He remembered the story and laughed, saying, "Oh, yeah, cool! So, you really lived in Russia?" He loved the fact that the KGB was stealing my copies of his CDs. He joked about his subtle hand in the downfall of the Soviet Union. It was then that I realized that I'd forgotten the totally tacky piece of Soviet crap I'd set aside to give him, in honor of his work to bring down the Soviets, one stolen CD at a time. Eventually, I'll get that ugly, but heartfelt gift to him!

We talked about his new CD, due out August 2nd. He mentioned that he hoped to have some more stuff from the upcoming disc, Mr. Hollywood Jr. 1947, out on his MySpace page before the release date. I told him I'd opened a myspace account and promptly cancelled it after receiving some pretty freaky e-mail. Said Michael with a laugh, "Ooooh yeah, it's a pretty freaky place."

It was just really cool to talk to him - about his music, about the concert hall (I told him what the Mingus Big Band director had said about the outstanding acoutics and he said he popped his head in and was really impressed by the sound.) After having a nice chat, I felt foolish about the CD I had tucked in my bag, in the hopes of an autograph. He had a sound check to do, and there was a funky-lookin' young local musician who wanted to pick his brain about crediting songwriting collaborators. It just didn't seem like the right time to whip out a CD and a Sharpie and go all fangirl on him. So, the CD stayed in the bag, I waved goodbye, and headed for home.

Thanks, Michael. Nice to meet you. Hope I didn't look too scary when I approached you!
Posted by Merujo at 5:48 PM