Even worse than I thought...

So, Wang Chung wasn't on last night's Hit Me Baby One More Time. They get to suffer in the grand finale next week. As if that wasn't bad enough, I was horrified to hear that another great performer of the '80's - another one I really like and even saw in concert three times - is up on the NBC humiliation block next Thursday: Howard Jones.

Lord, that is so sad. HoJo was no one-hit wonder! He kicked the charts hard '83-'85. And, HoJo has always seemed like such a nice guy. I remember hearing his mom ran his fan club and she sold t-shirts and stuff at concerts. (How sweet is that?) But I guess his following has diminished and his sales slowed considerably since the old days. I see on his website that he's selling a bunch of his stuff on eBay. Yikes. Major bummer. 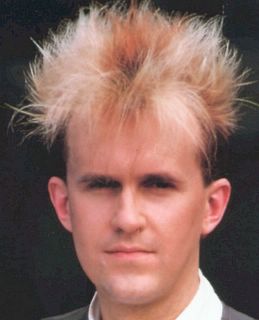 But, I will say, Howard has toured and toured and toured his brains out over the years. He's got dates listed for upcoming gigs in Europe, the UK, and the 'States, bless his heart. So, while I would love to see Wang Chung kick some ass, I do love HoJo...

Damn you, NBC! Damn you and your crappy summer crap!

I am glad that I am not watching this show. I would be lying if I said it didn't initially peak my curiousity. Who isn't sentimental about their youth and artists that performed the "soundtrack" to it?

I just couldn't stand to see these 'people of my past' battling it out in the usual ugly "American Idol" fashion. Ultimately, I would be the bruised victim... as if there isn't enough proof already that I am a spent human, middle-aged and growing older by the minute.

I'm didn't watch this past week, but I'll watch this coming week, just to provide psychic moral support to Misters Wang, Chung, and Jones (although, it's probably already been taped, so all that good vibe stuff will be wasted), but I'll have a large pillow at hand, to cover my face and ears in shame and sympathy for them... just in case...

I know what you mean about the "spent human" feeling. I've been thinking about that a whole lot lately, and when I do, a song by They Might Be Giants runs through my head: