The summer television season is upon us, and while that brings interesting things like TNT's upcoming Spielberg-produced "Into the West", it also means that all the squalid little projects that simply weren't good enough for autumn's Must See TV sensibilities start to crawl up from the dank pit of Network Hell. I'd like to be able to say some of this dreck is worth watching for the humor value, but that would be a lie. What I saw tonight was utterly humorless.

One gem on either UPN or the WB (sorry, other than "Gilmore Girls" and the occasional episode of "Charmed", it all blends together) was some fresh horror called "Beauty and the Geek". This piece of mental waste forces geeky guys to partner up with pretty, but vacuous girls for knowledge quizzes and dance competitions. In the quizzes, the girls have to answer what I would call basic knowledge questions like "Who was president during the Civil War?" (The answer given by our glossy-lipped, smooth-brained chiquita was, if I'm not mistaken, "Robinson".) The geeky guys then have to answer questions about the Hilton sisters and 50 Cent.

I swear to god, I'm not making this up. I lasted about 2 minutes before changing the channel.

I had completely forgotten that this evening heralded a new low in public humiliation, NBC's "Hit Me Baby One More Time!" where aging '80's (and early '90's) bands go to die. Based on a UK TV show of the same name, the premise is this: a passel of musical groups of the past gather on stage to sing about a minute and a half of whatever song they're best known for and later return to do a cover of someone else's song. The audience then votes, and the band with the highest score gets a small sum donated to a charity of their choice. Thank god it's for charity. Really.

This evening's shamefest was the first of three episodes and featured CeCe Peniston (whom I didn't recognize, but did know her song from the "Priscilla, Queen of the Desert" soundtrack), Tiffany, Loverboy, Arrested Development, and, god help us, A Flock of Seagulls.

First, I admit, I sadly missed Loverboy's performance. I wanted to see if they still were wearing red headbands and standing in front of big fans, blowing back their feathered hair. Back in high school, circa 1983, one of my friends and I used to cruise up and down 23rd Avenue in Moline, Illinois on Friday nights, blasting Loverboy out the windows of her father's red Audi. Oh yeah, we were cool!

I remember the principal of our high school trying to quash the trend of wearing tasteless concert t-shirts in 1984. He made an announcement over the school PA system that still sticks in my head today: "Will anyone wearing a Loverboy 'Get it up, keep it up' t-shirt please report to the principal's office..." After the gales of laughter subsided, he never tried that one again. (We wanted to hear him say, "Will anyone wearing a 'If you like my mountains, you'll love my Busch' t-shirt please report to the principal's office...")

And, as usual, I have derailed my train of thought...

Oh yeah - I thought Loverboy had called it quits after one of the band members was swept out to sea by a freak wave off the California coast a few years back. Apparently, I was mistaken. I guess a network paycheck can drag anyone's butt away from a cooler full of Molson's and weekend gigs at Badger McUpchuck's Calgary Music Corral. I would like to have heard them rev up "Everybody's Workin' for the Weekend". That was a serious, bad-ass anthem in small town Illinois, man. I remember that song echoing back and forth across the flooded quarry where my sister and I went swimming all the time (in a tiny rural town known only for a bizarre, bbq-gone-bad icepick murder...)

I missed Tiffany. Wait. Let me rephrase that - I avoided Tiffany. I did see the rest of the performers, though. It appeared that CeCe Peniston was singing live tonight, as she was out of breath, out of tune, and packed into what had to be painfully tight jeans on a middle-aged ass, poor thing. I hope they had a canister of oxygen for her offstage, a la Meatloaf. But CeCe was not the only gravity victim under the lights - time has not been kind to A Flock of Seagulls, either. 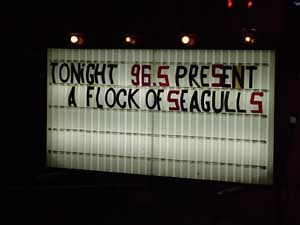 I've told them a hundred times: put A Flock of Seagulls first and Puppet Show last...

First off, as the Sasquatch said to me over the phone, as they took the stage, "Oh my god, what total whores." And yes, if the number of times the Flock has been through our area alone in the past couple of years - playing really shitty venues - says anything, I bet these guys would play bar mitzvahs and weddings, if the price was right. Dudes, you had one hit. And it wasn't that good. Have you considered a career in the service industry?

Sorry. That was mean. I think it's because I'm smarting a bit to see that a band I really liked is up on the block next week. And, before you start to smirk. Just. Stop. Now. Who has me all defensive? Well, it's London-based band Wang Chung. (I told you not to laugh!) 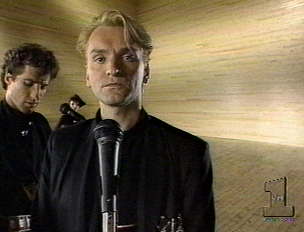 Seriously people - Points on the Curve is one of the finest recordings to come out of the 1980's. I'm not shitting you. Wang Chung's debut album was brilliant 80's pop. Wang Chung deserved more credit than they ever got. I think everything started to fade after "Everybody Wang Chung Tonight."

I'll always think of Frasier Crane strolling into Cheers for his bachelor party, saying, "You know, on the way over, I decided to listen to a rock station to get into the mood. And I heard a line in one of those tribal passages that I thought was the keynote for this evening. 'Everybody have fun tonight. Everybody Wang Chung tonight.'" Snigger though people might, that song had a great, catchy bridge ("On the edge of oblivion/and all the world is Babylon/and all the love and everyone/the ship of fools is sailing on...")

But, man, Points on the Curve. What a rockin' album, folks.

A handful of years back, I was astounded to see Wang Chung listed for a date at a local club called Jaxx. Jaxx was the kind of place that always seemed to feature Molly Hachet and Great White and Ronnie James Dio. It really wasn't a Wang Chung venue. But, the Sasquatch and I girded our loins and went forth to the wilds of Virginia to see these fine Canadian folks.

We should have known something would go awry before we even went inside.

Jaxx turned out to be a scuzzy little place in a scuzzy little stripmall in the middle of West Bumblefuck, Northern Virginia. We got there around 6:30. I think the gig was supposed to start at 8, and, it was a "school night" to boot. It had to be nearly an hour before the burly, tattooed doorman let us in. We were ushered into a small bar area that might have comfortably held a dozen people. Maybe. They had a table with used cds for sale and a couple of old, torn up diner booths in a far corner. We sat at the bar, waiting to be allowed into the actual music space.

Looong story short: when we finally left Jaxx, around 10 or 10:30, we'd still not been allowed in the venue (the club owner's son was apparently playing with his band, screwing around, and the burly man told us the owner's kid always got to play when he wanted, much to the dismay of the legit bands on the bill.) The only other two potential Wang Chung audience members came and left, and we never got up the chutzpah to talk to poor Wang (or Chung, never figured it out), who sat in one of the booths throughout this goat rope, being told periodically that their stage time was being postponed and postponed. The worst part? Some woman came out and said, "Wang Chung? You were looking for a hotel room in the Crystal City area for $40? Sorry, the best I can find is $60..." Oh, we felt soooo bad for these guys. Seriously. The Sasquatch felt that, under the circumstances, going over to talk to Mr. Wang (or Mr. Chung) was probably just not a great idea. When we left, robbed of our chance to hear "Dance Hall Days" live, the band was being told that they'd probably go on around midnight.

And so, another story of musical glory goes down in flames.

Wang Chung will be on "Baby Hit Me One More Time" next week. I will watch it because I feel some powerful need to support these guys. Wang Chung - go with god.

By the way, Arrested Development won tonight's "event". They deserved it. They sounded pretty tight. They gave their moolah to UNICEF.
Posted by Merujo at 10:25 PM

Thanks for standing up for Wang Chung. I was deeply saddened to see them splashed across the screen during the promos for the show. And to think I would have been tempted to join you and the big 'ol weird geek for the concert...

Wasn't the tagline: From the brilliant mind of Ashton Kutcher - "Beauty and The Geek"?

Seriously... I groaned for about 2 hours after the previews. Is this all the 21st Century has to offer us?

I just checked. I still have Points on vinyl.