I feel a wee bit bad after my last post. I don't want people to think I'm some sort of TV leech with giant saucer eyes from taking in too much boob tube. I'm a child of the TV age, no doubt there - I recall that I wrote most of my high school papers lying on my belly in front of the television in my parents' living room, sucking up all the MTV I could. (Now, I think of that and shudder and wonder how many ibuprofen I would have to take to recover.) Some of you younger folks might be amazed to know that, once upon a time, MTV played MUSIC VIDEOS. I know it's shocking, but yes, it's true.

Let me just say, I don't think that the TV-Turnoff Network is a bad thing. In fact, I think turning the TV off, going outside, and breathing in lots of fresh air is a Very Good Thing. I simply meant that, with my meandering tendency to watch all sorts of TV like the shiny-object-attracted video crow I am, I would be a dreadful candidate to hold any position with them. I'd feel like a total hypocrite. (And can I say that Little Miss Insomnia 2005 just now watched one of the bestest X-Files episodes ever? "The Unnatural" with the beee-yoo-ti-ful Jesse L. Martin as Josh Exley, a baseball-lovin' alien who joins a Negro league team in Roswell, New Mexico in 1947.) 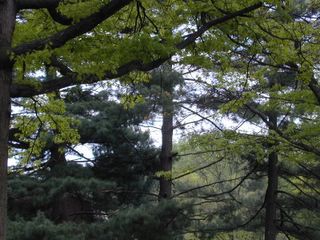 Pretty trees outside my apartment building. Love them, I do.

Turn the TV off now and then. Ride your bike to a park and read a huge book. Drive to the beach and frolic in the hopefully medical-debris-free surf. Take a walk. (And watch out for iPod muggers, kiddies.) Go swimming. Write a story. Listen to great old radio shows on NPR (man, I love those old episodes of Gunsmoke with William Conrad as Matt Dillon.)

There. Now I feel a little better.
Posted by Merujo at 3:16 AM